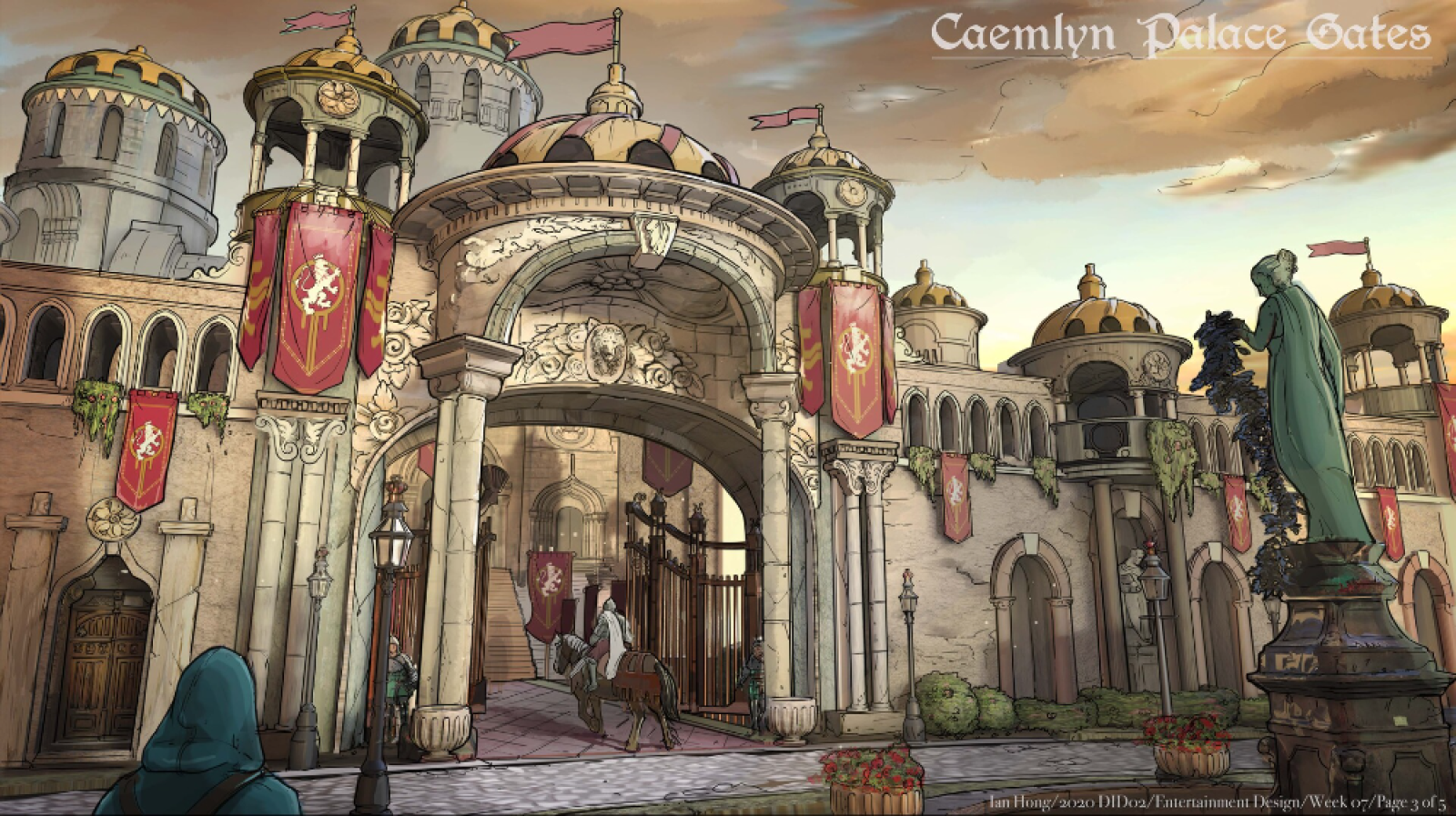 "Forward the White Lion" —Battle cry of the Queen's Guard

"Caemlyn is one of the most beautiful cities in the land, second only to Tar Valon, though its natives may argue that ranking. Like a gleaming crown upon its gently rolling hills, the city is actually made up of two sections, the New City, built well under two thousand years ago by the hands of man alone, and the ancient Inner City, much of which bears the mark of Ogier stonemasons. A great fifty-foot wall of silver white stone surrounds most of the official perimeter of the city, broken by tall round towers that flank massive arched gates. Outside the wall, buildings cluster thickly like lichen to a log, spreading outward from the glittering mosaic of the city in a gradual dispersion. Within its outer walls the city is laid out in a crazy quilt of streets and byways, with towers and domes gleaming white and gold in the sun."   The 50 foot city walls stretch more than 24 miles, and the area of the city is 53.82 square miles. It hold a population of roughly 300,000 inhabitants.   Travel   The Whitebridge Gate to the west of the city leads to the village of Four Kings. The road north leads through the Braem Wood to Tar Valon. The south road leads to Far Madding through the Far Madding Gate, and the eastbound road leads to Aringill. The southwest gate leads to Lugard via the Lugard road. The main entrance to the Inner City is the Origan Gate. Another gate to the Inner City is the Mondel Gate. The outer part of the city is called the New City. The heavily populated area outside the city walls is called Low Caemlyn.

"On the highest hills at its center rests the glittering Inner City, encircled by its own shining white wall and bejeweled with even more beautiful towers and domes. The broad paved streets of the Inner City are carefully designed to follow the natural curves of the hills, spiraling ever upward to the crowning glory of Caemlyn, the Royal Palace."   The ancient Inner City was constructed by Ogier. The most impressive building in the Inner City is the Royal Palace, which serves as the seat of government for Andor. The inner city also holds a massive underground cistern that is fed by an aquifer, thus Caemlyn cannot be cut from fresh water when besieged.   The Inner City is surrounded by a white stone wall, effectively walling the upper class from the rabble. The Origan Gate leads into the Inner City, "a great white marble arch in the gleaming white wall."

"The Palace is both the seat of government for the nation of Andor, and the architectural rendering of her heart and soul. A shining example of Ogier craftsmanship, the Palace’s snowy spires and stonework appear as delicate as lace, yet are as strong as iron. Within the Palace grounds extensive gardens bloom almost continuously, with many rare flowers and plants."

The New City is less than two thousand years old, and was built by humans to surround the Inner City.   Alleys in the New City, called "crossing runs," are narrow and often muddy and have an unfortunate smell. Buildings rarely have entries into the crossing run, the few that exist are rarely used, and no windows face into the derelict passages.[2]   A fifty-foot gray stone wall, six leagues in length, surrounds the New City, walling the entire city of Caemlyn safely away from invaders. (Need Source for this)

The heavily populated area outside the city walls is called Low Caemlyn, consisting primarily of farmers.

"Forward the White Lion of Andor!" —battle cry of the Queen's Guard   Andor is a powerful nation, with a substantial army consisting of the Queen's Guards and the standing armies maintained by the individual noble houses, who are also able to call upon huge levies in times of crisis. The maximum military strength of Andor has been estimated at almost 200,000 men, although many would be barely-trained levies.   Through history, Andor has been under almost constant pressure from neighboring countries. Andor and Cairhien have been to war more times than any two countries except for Tear and Illian. Often-lawless Murandy, south of Andor, is the source of many border incursions which the Queen's Guards must fend off; conversely, the Andoran forces at the Murandian border have resulted in Andor having a strong hand in Murandian politics. The Children of the Light have always had a reason to dislike Andor, as the Daughter-Heir always studies in the White Tower.   Andor's strength comes from its wealth. Much of this is generated in the Mountains of Mist, far to the west of central Andor. Gold, silver, iron, and copper are extracted from the rich mines in these mountains. Most of this metal is refined in the smelters near the mines.   The strength which must be expended to retain the valuable mines in the Mountains of Mist means that other outlying regions of Andor have been virtually forgotten. A good example of this is the Two Rivers, where few even realize they are part of a larger kingdom. One well-known town in the far west of Andor is Whitebridge, so named for the large bridge which crosses the River Arinelle into the town.

Baerlon District Baerlon is the primary city of western Andor, though far smaller than huge Caemlyn in the east. Primarily a mining town, it serves as a resting point for merchants bringing metals from the mines in the Mountains of Mist or tabac and wool from the Two Rivers to the more populous eastern half of Andor. Baerlon is also the home of Min Farshaw.

The Two Rivers is a region of Andor south of Baerlon, located between the upper reaches of the river Manetherendrelle, or the White River as it is called in the Two Rivers, and the River Taren, a smaller tributary. It contains four villages; from north to south, Taren Ferry, Watch Hill, Emond's Field, and Deven Ride. To the west are the Sand Hills and the Mountains of Mist, and to the east lies the Waterwood, a dangerous swamp. These obstacles, along with the two rivers, the Taren only crossable at Taren Ferry and the White River impassable at any point, make the Two Rivers a highly isolated region of Andor. Andoran soldiers and tax collectors have not been seen in the Two Rivers for many generations.

During the first millennium after the Breaking, the territory of Andor was held by two of the Ten Nations, Manetheren in the west and Coremanda in the east. The city of Hai Caemlyn was founded as one of Coremanda's major strongholds, a large city close to the River Erinin, which was important for trade. During the Trolloc Wars both kingdoms were destroyed.   After the conclusion of the wars, the kingdoms of Farashelle, Aldeshar, and Caembarin arose out of the ruins of the two older kingdoms. Aldeshar and Caembarin, named for its capital at the rebuilt city of Caemlyn, were two of the most militarily powerful nations of their time and sent armies against the false Dragon Guaire Amalasan in the War of the Second Dragon, although it was actually King Artur Paendrag Tanreall, known as Artur Hawkwing, of the small kingdom of Shandalle, east of Caembarin, who defeated Amalasan. Caembarin attacked Shandalle a few months later and Aldeshar followed suit the following year, allegedly due to the manipulations of the Amyrlin Seat, Bonwhin Meraighdin. During the Consolidation, Hawkwing conquered Caembarin early in his campaign, but Aldeshar did not fully surrender until FY 963, the last nation to be added to his growing Empire.

Blaming King Joal Ramedar of Aldeshar for the murder of his wife, Amaline Paendrag Tagora, three years previously, Hawkwing put Ramedar to death and scattered the people of Aldeshar across the Empire. This period of rage, the Black Years, ended after Hawkwing's aborted invasion of the Aiel Waste and his marriage to the lady Tamika.   Hawkwing set about organizing his Empire into provinces. The Imperial Province of Andor was created early on, spanning the central regions of the Empire. The precise borders of Andor Province are unknown, but Caemlyn was the ruling city. The first governor was Jeorad Manyard (who was more interested in creating a translation of The Prophecies of the Dragon), but his rule did not last long. Displaying regret for his harsh treatment of Aldeshar, Hawkwing permitted its people to return home and appointed Endara Casalain, King Ramedar's daughter, as the Imperial Governor of Andor in FY 967.   In FY 975 Hawkwing's armies besieged Tar Valon, a siege that was to last for the remaining lifespan of the Empire. Endara's daughter, Ishara Casalain, began a romance with General Souran Maravaile, the commander of the siege, in the early FY 990s.

After the death of Artur Hawkwing in FY 994, Ishara and the new Amyrlin Seat, Deane Aryman, persuaded Souran Maravaile to lift the siege of Tar Valon. Ishara and Souran returned to Andor and married.[2] Endara withdrew any claim to the governorship or crown and swore fealty to Ishara. Ishara declared herself the first Queen of Andor, establishing an unbroken bloodline of female rulers.