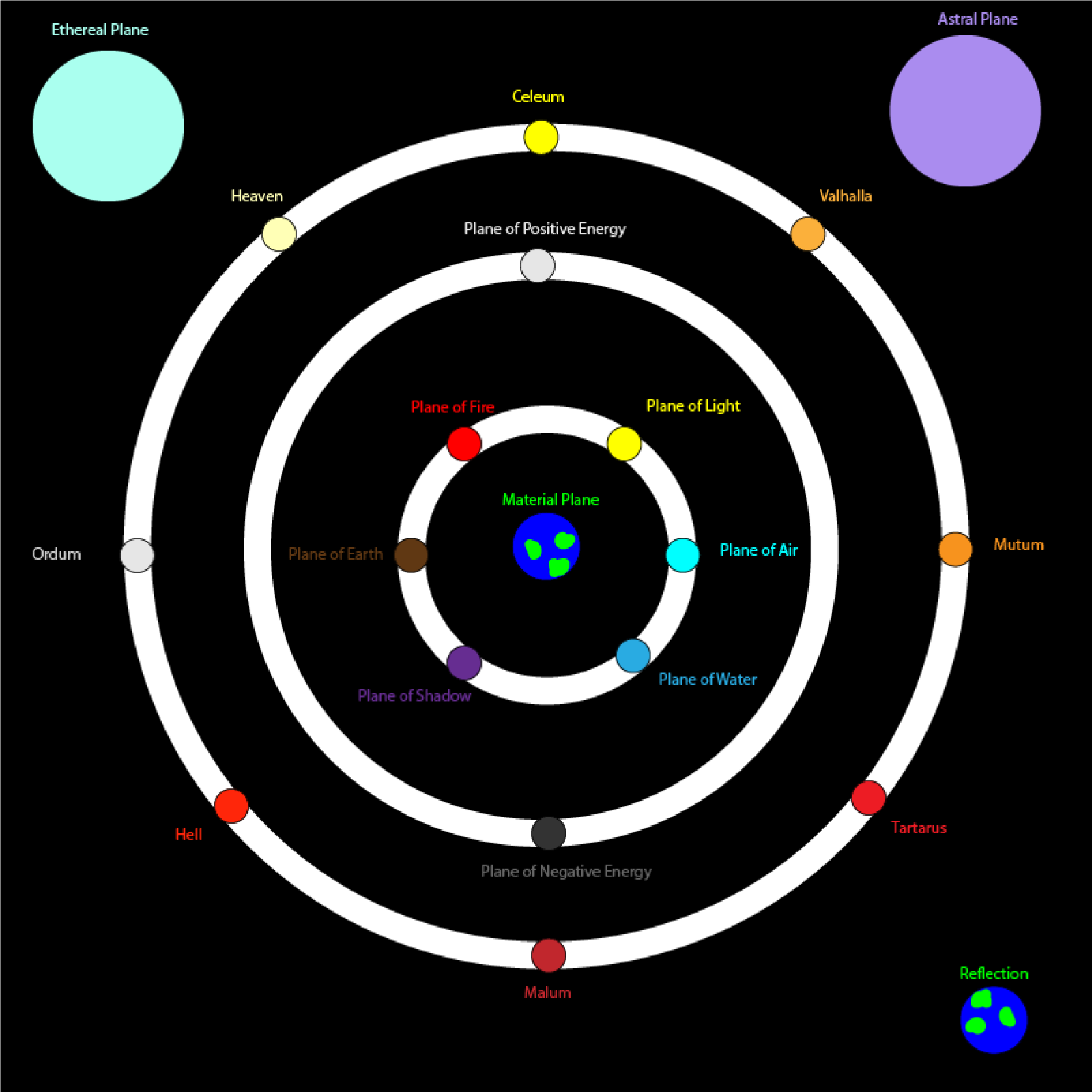 The Planes of Reality

The Planes are the different layers of reality that make up the universe. While the topography of each plane varies depending on its nature, each plane is roughly the same size. Most of the different Planes are categorized into Rings, based on their nature and purpose. Each Plane has a true name, but, aside from the Alignment Planes, most people refer to the type of plane that it is, and the true name is mostly used by residents of the Plane itself when speaking their elemental language.   The first ring is made up of the Elemental Planes. The Elemental Planes store the physical building blocks of the universe in their most basic forms. The Elemental Planes include the Plane of Fire, Ildverden, the Plane of Air, Vindus, the Plane of Water, Storhav, the Plane of Earth, Jordenkor, The Plane of Light, Elafrys, and the Plane of Shadows, Skotadi. They are home to a variety of elementals and other elemental outsiders. The Elemental Planes are stationary and also the most directly connected to the Material Plane, and permanent entrances to them are fairly common in places with particularly strong ties to the element in question. At times, portions of the Elemental Planes overlap, creating temporary spaces where their substances combine, and strange hybrid creatures are born. These overlaps are temporary and when they end, and creatures within those spaces are thrust out into either one of the two overlapping planes, or the Material Plane. The Elemental Planes are also known to each house a Divine Realm at their center. These Divine Realms are the homes of the Full Deities, who in turn serve as the absolute ruler of the Plane.   The second ring contains the Energy Planes. The Energy Planes contain the conflicting energies of the universe and include the Positive Energy Plane, Zontonos, and the Negative Energy Plane, Pethainie. The Energy Planes lack much physical form, and as such, few creatures live in them permanently. This lack of structure also makes entrances to the Energy Planes difficult to find, as they tend to be temporary in nature. If one wishes to travel to the Energy Planes specific magical spells must be employed in most cases, especially as most creatures are unable to survive anywhere but the few locations in the Energy Planes that do have some form of structure to them.   The third and final ring contains the Alignment Planes, which are further divided into the Pure Planes, and the Converging Planes. The Pure Planes represent the pure embodiments of each Alignment. The Plane of Good is Celeum, the Plane of Evil is Malum, the Plane of Law is Ordum, and the Plane of Chaos is Mutum. The Converging Planes are where two of the forces that make up the Pure Planes converge together. They are similar to the overlapping sections of the Elemental Planes, but larger, and more permanent. The Converging Planes are the Lawful Good Plane of Heaven, The Chaotic Good Plane of Valhalla, the Chaotic Evil Plane of Tartarus, and the Lawful Evil Plane of Hell. The Alignment Planes house many of the Divine Realms of Lesser Deities, though none can claim full dominion over any of the planes. Most mortal souls are sent to one of these planes when they die, depending on what god they worshipped and how they lived their life. There are very few permanent entrances to the Planes on the third ring. Most people only go to them upon dying, though under specific circumstances a god might summon someone to their Divine Realm on one of the Alignment Planes.   The majority of Planes fall into one of these three rings, but there are a few notable exceptions. The foremost of these is the Material Plane, which sits at the center of the rings, and is significantly larger than any other plane. Some scholars argue that the Material Plane is actually the Neutral Plane, but others argue that that would be an impossibility as the conflicting forces would simply cancel each other out. The next two Planes, being the Ethereal and Astral Planes, stretch out and cover all other planes, allowing travel between the planes with the living travelling through the Astral Plane, and the souls of the dead travelling through the Ethereal Plane. The final Plane that exists outside of the ring is a Plane known as the Reflection, a strange mirror realm that exists as a reverse of the Material Plane, and appears to be entirely separate from all plans aside from the material plane as well as the home of the Fey.
Type
Universe