The Great Temple of the Goddess Taijer, whose dominion is Fire, War and Unity, as the other 3 temples of the 4 seasons, has stood since the infancy of the Empire's existence. Perched on the Peak of Spring, it houses magically gifted noble practitioners of the mystical arts, who wish to understand the power that is hidden in the element of fire and proper art of war.

Located atop a large mountain, on the Peak of Spring, this temple is a wonder of architecture, with large pillars, walls and towers made of limestone, that can be seen from miles out. Its look, however, is different to the other 3 temples, for the materials and how the temple complex looks is a distorted version of the other temples. The repaired sections of the temple are made of limestone that has not been imbued with magic, unlike the other temples, which haven't seen the hand of war as frequently.
In order to gain entry into the temple, one must pass a bridge made of limestone bricks both big and small, where at the start of the bridge, two large statues of Taijer, facing in the direction where visitors would come from, stand guard. The temple complex itself has 3 tiers, where on the first tier, the practice and duel grounds, as well as the gardens are located, surrounded by walls and towers, then up the walkways on the second tier located are the libraries, study halls, kitchens and dorms, then finally in the third tier are the towers of the masters located, overlooking the entire complex and the surrounding area. Within are the Halls of the Masters, which are used for various purposes, but can only be accessed by Masters of Spring.

The state that the temple is in is due to the fact, that out of the 4 sibling temples it has had the most turbulent history, for most of the civil wars and uprisings that plagued the Empire, eventually reached the temple and usually it was sieged, taken and thereafter looted, for it was believed that it held a powerful artifact - the Hand of Taijer. Courtesy of this fact, it was impossible for the temple to stay intact and it has been rebuilt and repaired several times.
Whilst the relic itself has not been seen for a thousand years, the legend has it, that when the goddess Taijer left her mortal vessel, her armaments were buried with her, somewhere in the temple and with them, the Hand. The Hand is said to grant the wielder the ability to create a burning flame, which shows the weaknesses of the enemy forces, notwithstanding the magical abilities the Hand possesses. 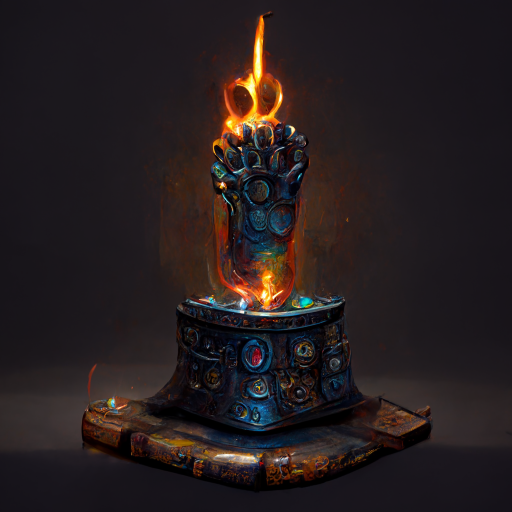 "The Hand of Taijer on a Pedestal"

Whilst the Hand has never been found, it is said that only the highest monks of the Temple know how to find it, but the oath the monks have taken makes the task of learning the location nigh impossible, though it has been said, that in the spring of the year 504, during the Red Rose Rebellion, the rebellious lord Weilai of Meilatar was able to convince one of the monks to give up the location of the Hand, but was cut down before being able to use the knowledge to find the Hand. Though a rumor has it, that one of his exiled generals, who survived the rebellion and fled across the sea, was able to learn how to find it, but this is, most likely, only a cautionary tale for future Emperors, what one should be afraid of, when running the state...

Shangaljer is one of the 4 sibling deity temples, dedicated to to the goddess Taijer. The inhabitants of the temple are the Monks of Taijer, who, like the monks of the other temples, focus on exploring magic and how to reach enlightenment. The monks of Shangaljer however are focused on the aspects of fire and war, therefore many of them are master battlesorcerers who either serve the emperor as soldiers on the battlefield or as tacticians, due to their military education.
Founding Date
Year 5 since founding
Type
Temple / Religious complex
Related Traditions