The Mazhōsvū is a creature that is suspected to roam the vast planes of the new Dānāofari homelands, rumoured to be over 16 feet tall and with long spindly arms with as many joints as a fine chain. The people of the countless cities of the Fēdr al Cuwtōhw have reported these creatures as being faster than the mightiest steads and almost impossible to kill in combat. It is nearly impossible to find a Dānāofari who isn't afraid of this creature, with many believing it being they are forces of the god Hwitho (the god of Death and Illness) who wishes to fool his brother, the god of war, by killing his best solders.

The Mazhōsvū is between 15 and 20 feet tall, with tatted dark fur covering its tall and spindly body. Their arms are joined in countless places and have long, savage claws at the end of their hands. Notable, on 1 hand the claw has a much wider profile, similar to a spoon, that is used to carry out their gruesome attacks against the locals.

Attacks from the Mazhōsvū are few and far between but news of them always spreads like wild fire, the first attacks started almost as soon as the first Dānāofari settlements sprung up. How they played out would be like the following:
The creature would find a way inside the town or city in the middle of the night, its long figure letting it crawl across roofs whilst keeping its body low so that it is near impossible to from the ground. From here the creature will use its excellent eyes to look inside the open windows of houses, looking out for any unattended or sleeping infants. Once finding once they will use their flat, spoon shaped claws to scoop the sleeping child from its cradle. Once it has its prey the monster will use its razor sharp claws to surgically open up the babies body, filling its mouth with rags or grass so stifle its cries of pain. Once opens the spoon shaped claw is used to scoop out innards and bones and shovel it into its gaping, rotting mouth. After it has fed the flesh bag of the child is filled with rocks, straw or rags to make it look health and plump before putting it back where the child was found then heading off back into the night. 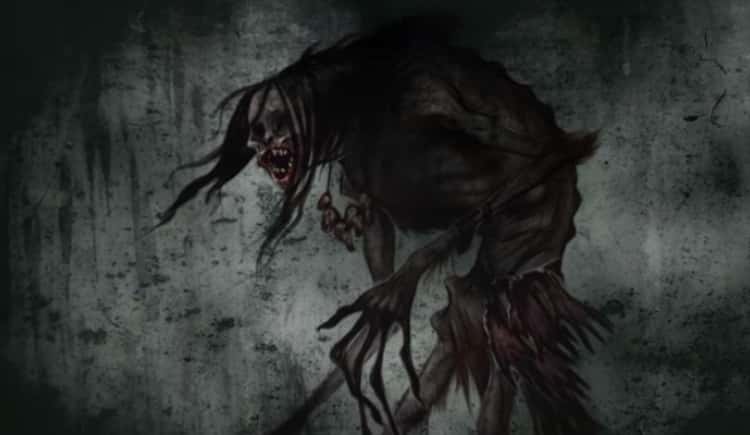 Artists Deception of a Mazhōsvū