The wall of water

D-Dakuina was what started it all. That dread storm, from out of nowhere in the sea. The earth trembled, the wind roared. And while the core sectors, [spits on ground] the core sectors got aid immediately, us on Pakani got nothing. N-nothing but death and sorrow. [sobs]
Pakanian villager

Dakuina, or the great storm, was an earthquake and tsunami that struck the island of Pakani as well as other regions in the city-state of Noralin. After the storm, large amounts of infrastructure were devastated, and Noralin politicians prioritized sectors near their homes for reconstruction, leaving out the poor sections of cities and entire outer sectors of Noralin, such as Pakani. This storm was a direct precursor to the water-borne Plague of Pakani and the rise of Ravana, Bandit Commander. It also was the beginning of a radical shift in Noralin's oligarchical system, culminating in the stripping of land from nobles, the magister agreement between the city-states, and the installation of a meritocracy. 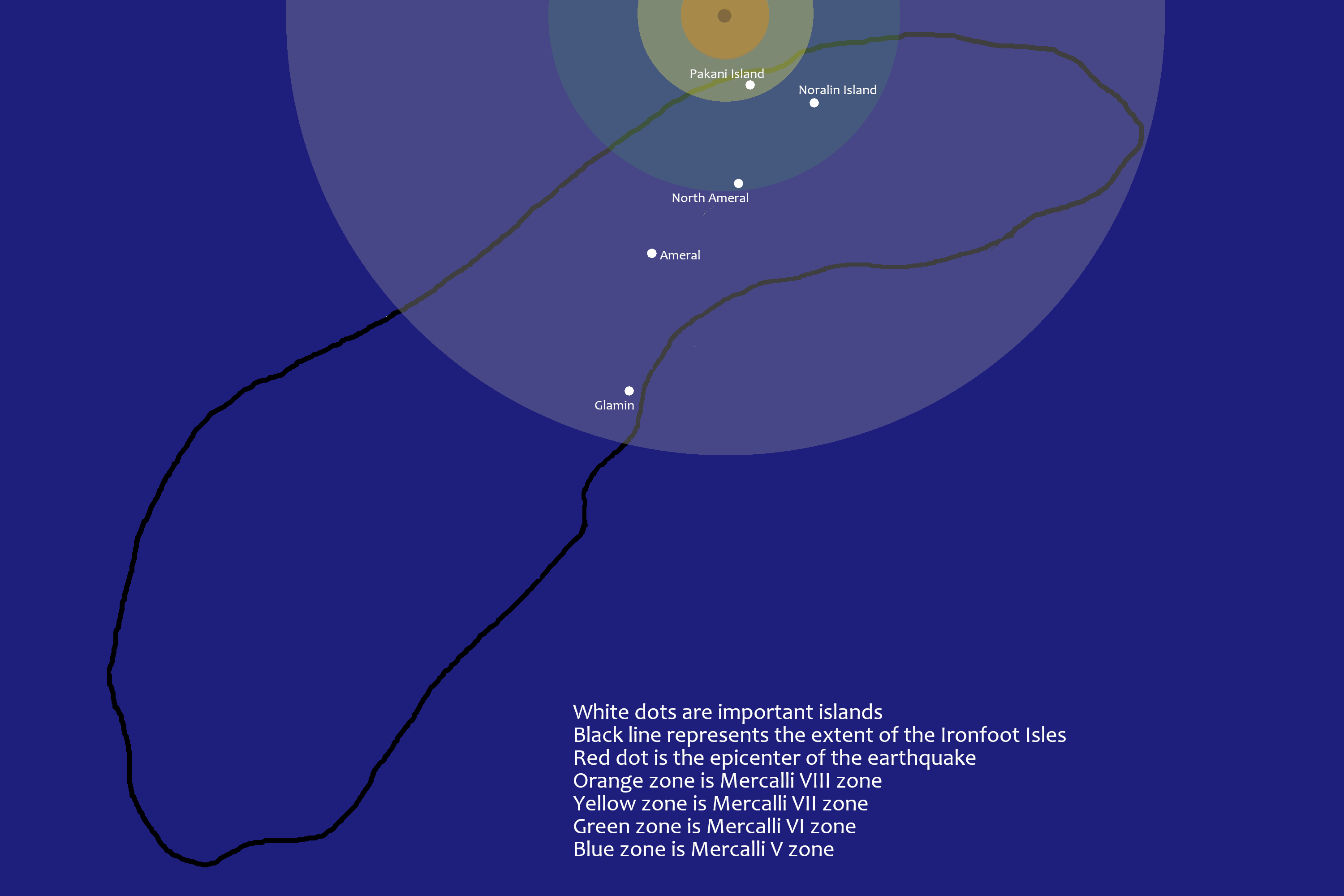 Dakuina Earthquake Map by ElementalShrike
In the early morning, an earthquake with magnitude 8.5 occurred seventy kilometers north of Noralin territories, caused by the subduction of the Othrys plate underneath the Panocia plate. The earthquake was felt as far away as Ameral and Glamin and destroyed structures in Pakani and nearby areas, especially in slums. The earthquake also led to subsequent fires in some regions, including Pakani. However, soon shaking subsided and villagers worked to put out fires in the next half-hour.   However, after the earthquake stopped, the tsunami came. It took about 30 minutes for the tsunami to reach Pakani as a 15 meter tall behemoth. It swept the entire Ironfoot archipelago, although most islands merely experienced it as a 1-3 meter wave. Noralin was particularly hard hit: several islands, including the capital, were damaged.

After the tsunami, many homes were destroyed on coastal towns such as Pakani (city) and Handan (2nd-largest city in Noralin). This tsunami also wiped out much of Noralin's fleet, meaning that communications, trade, and other non-essential activities were essentially cut off. The government in the cities of Noralin and Handan decided to prioritize certain sectors for reconstruction: however those sectors were generally where the oligarchy lived, and not the common people. Starving people became bandits just to survive. Pakani and its neighboring isle of Serai were completely cut off from Noralin, and had to fend for themselves.
Casualties:
~7,600 (Noralin)
~400 (Ameral)
Wave heights:
15 m (Pakani)
11 m (Noralin Island)
7 m (Sabdao)
5 m (Lanasu)