Blessed Be Those Who Bask in The Lantern's Light

Among all of the great cities that have emerged since the turn of the age Kelrin has proven to be by far the most prosperous. Led by a figure known to outsiders as 'the Lord of Lanterns' the city of Kelrin is a place of beauty, art, and divine worship. Many would consider it to be the very soul of Lorian, a place where those who seek insight from the teachings of the Ascended or hold a desire to hone their creative Arts.To the east of the city lies Obali Lake and in it’s center the Emberhear Tower, rumored to be home of one of the few remaining Arch Mages from the Age of Ascension. Southward waits the Golden Foothills and the Goblin city of Skargmot. To the North West of the city looms Farlos Dal, the last great enchanted wood. Many believe that because of its proximity to the great forest that the soil in and around Kelrin is potent and rich with minerals and nutrients which in turn lead to a swift farming boom. While this great deal of farm land does expose Kelrin to a deal of danger in this yet untamed age the city's prevalence insures that there is always someone available to lend a helping hand, be that guardsmen or eager adventurer.
Little is known about the figure known as the Lord of Lanterns save for one defining story he shares with the founding of Kelrin itself. Near the end of the Age of Ascension when the land was more savage and unforgiving than even now Vornarek the Cinder’s Call, an old and powerful red dragon held the domain that would be Kelrin as it’s hunting ground. It is said that the Lord of Lanterns armed with the ascended artifact known as Myrith’s Torch single handedly slew the vile beast and used its horde to fund the founding of Kelrin. Though little else is known of him by outsiders those native to Kelrin sing nothing but high praise of their beloved leader. Even the Sea Reavers are pleased to make port in the harbors of Kelrin and enjoy the Lord's hospitality. So much so in fact that rumor has begun to spread that Lady Artress Larbrook, ruler of Greinstock, and commander of the Sea Reavers, has extended the beginnings of an olive branch to their sister city in the South lands. However this high opinion is not shared by all however as the Arclight Council of Dala'ros Lorethin refuse to so much as send a single ambassador to set foot in Kelrin to attempt to make contact with what would seem to be an obvious and powerful potential ally. 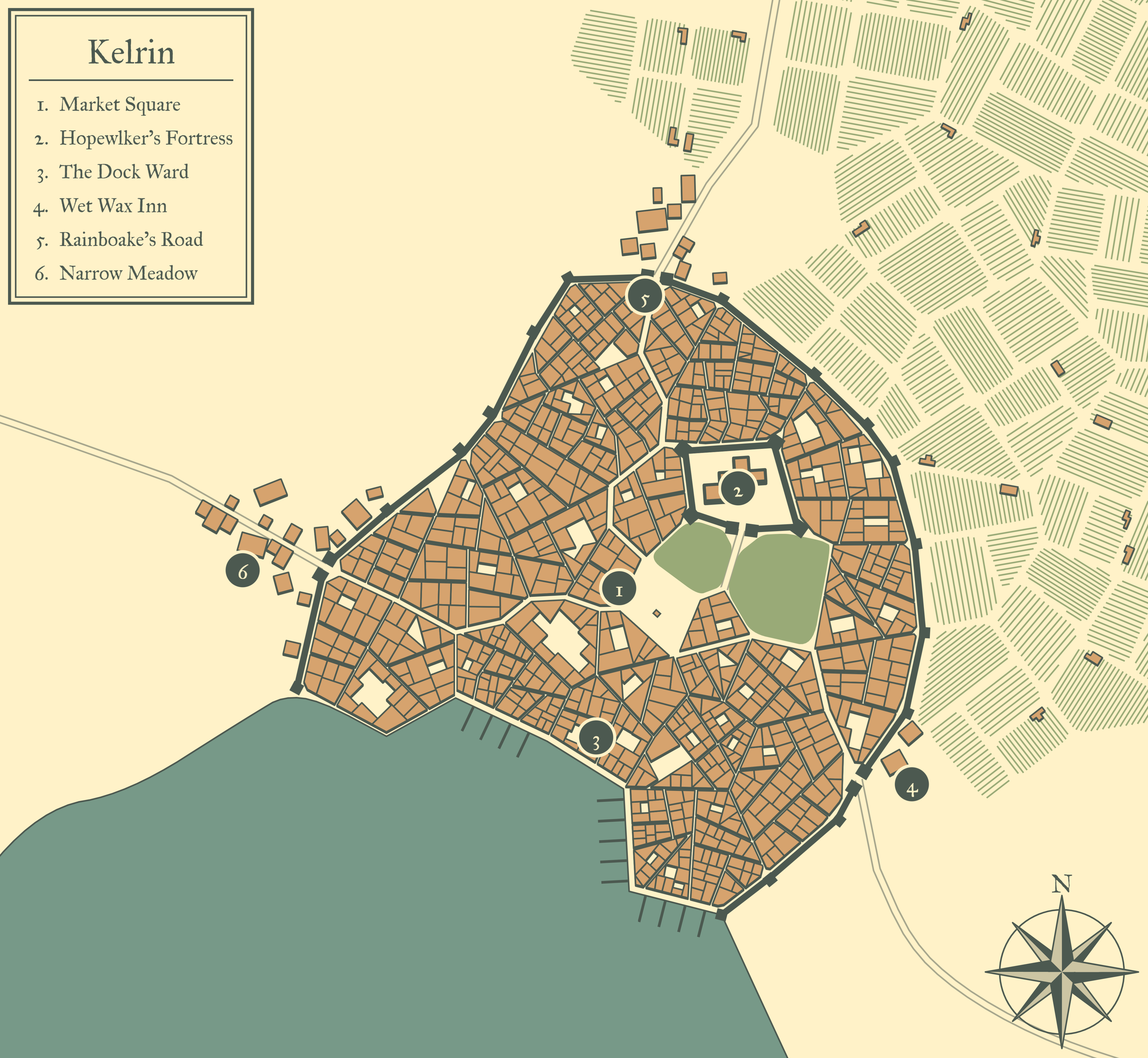 Famed for being one of the more divers and well outfitted markets in all of Lorian the Market Square, also known as the Trader's Haven, is the closest anyone may ever come to experiencing the luxury and convenience of the last great Age.

The home of the Lord of Lanterns and crown jewel of Kelrin the Hopewalker's Fortress is one of the most secure locations West of Karz'dorm. Formerly the throne of the red dragon Vornarek the Cinder’s Call the castle is now ordained with gifts and blessings from all across the realm of Lorian. Not least of Which is said to be the skeleton of the great dragon herself.

One of only two truly 'free' freeports in all of Lorian the Dock Ward is heavily trafficed and traveled by fishermen and the brave few souls willing and able to sail the Sea of Fate's dark waters.

Origionally a candle making shop the Wet Wax Inn has become one of if not the most prominent adventuring tavern's in the western region of Lorian. With a site as well traveled as it is historic the Wet Wax Inn was the meeting place of the first true adventuring guilds of the new age as well as rumored to be the Lord of Lantern's origional homestead before the slaying of  Vornarek the Cinder’s Call.

Rainboake's Road, named for Loris Rainboake, the first guild master of the Torch Keepers is said to be the exact path he walked nearly two hundred years ago to bend the knee and be the first to lay fealty to the Lord of Lanterns.

The Narrow Medow is the most recent expansion attempt by the city of Kelrin. Originally a small slum, rather than having it torn down or left to rot the Lord of Lanterns instead encouraged aid and good will, vowing to build the small settlement up and expand the city's walls to grant additional safety to those who call it home.