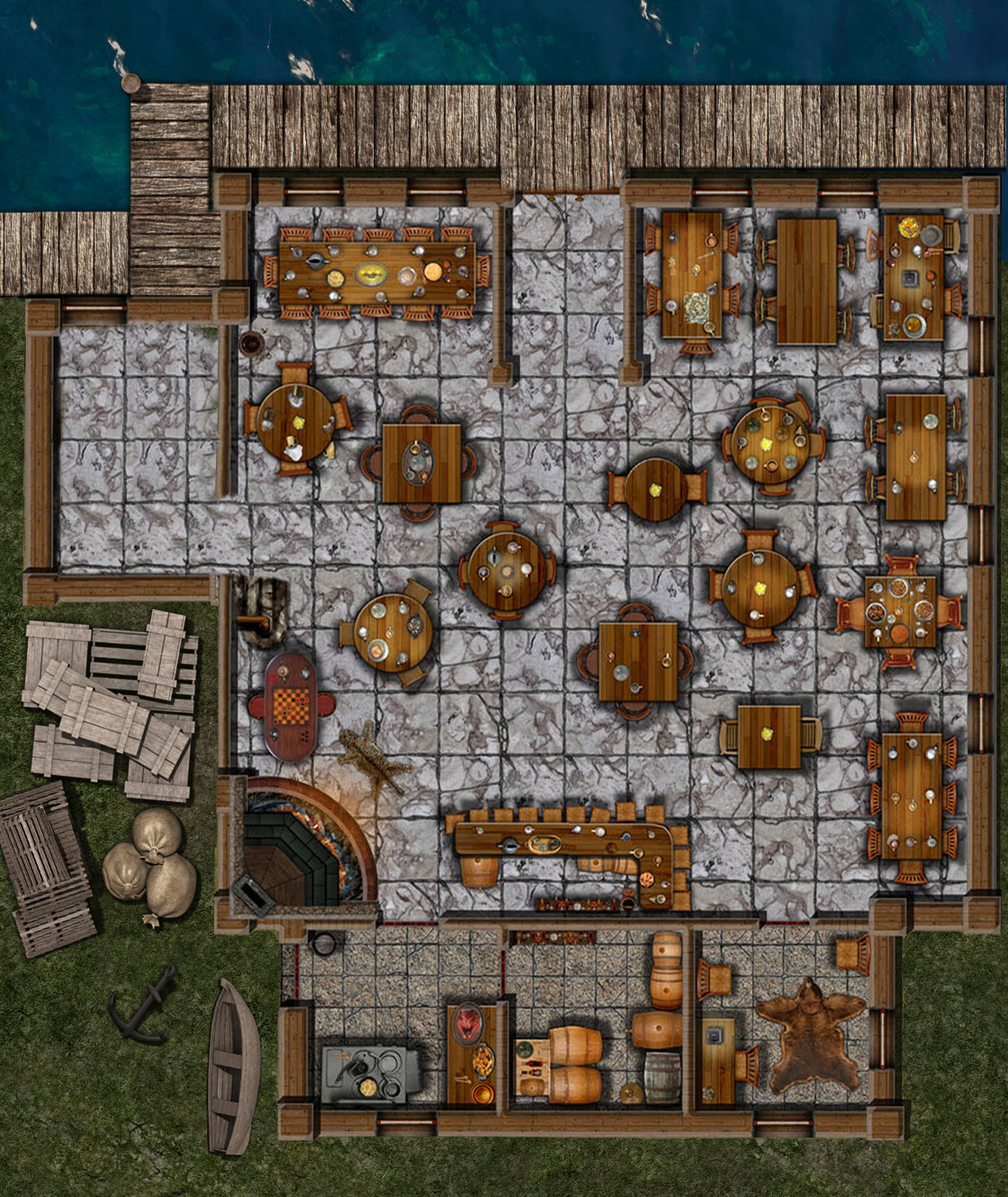 Map Size = 16x19   The Empty Net is an old establishment in Saltmarsh. It was originally an old home, abandoned and repurposed many years later into a watering hole by a industrious gnome named Juiloss Manafren. He had a hard time managing a tavern in the seedier side of town, and after a string of thefts, sold the tavern to Kreb. The circumstances of this acquisition has come under some scrutiny when the previous owner disappeared, but most have forgotten this and noone seems to care much since the gnome had no family and few friends to press the issue.   The tavern under his owner ship has been expanded, adding a proper kitchen, storeroom, deck and side office on to it. Where he got the money in short term is a matter of mystery to many, but some suspect it was Galen Primewater as he "rents" the side room for his private affairs.   The new deck is partially supported by stilts driven into the harbor waters, and this rickety tavern is purportedly a haven for Saltmarshes seedier inhabitants. The owner takes coin from anyone and asks no questions, troublemakers are thrown out the door over the railing, and into the reeking harbor.   The young Edilane works with Kreb. She is a capable worker and is paid well to look the other way about any business that might be conducted in a manner that might not be in strict accordance with the law. The inn has many other guests and patrons of interest, and is a great place for a rowdy night of drinking or a game of darts. Near the bar is a sign that says "Bullsheart Champion" and below it is a dart board with a board. The current champion is 'Crazy Eyes' Brooks, and she is often at the bar willing to take on any challengers   Bullsheart Gameplay Mechanics
Each player must make a dexterity attack roll with a dart against a dartboard with an AC of 10. After the first round, each player has the opportunity to raise their bet. After two more rounds of dart throws, the player with the most points (as determined by the success of their dart throws) takes the pot! The players earn points by their attack roll as follows:
1-9: the dart misses the board entirely, and may even hit another patron or a light source. No points.
10-12: the dart hits the outermost ring and earns a single point.
13-16: the dart hits the middle ring and earns two points.
17+: the dart hits the center ring and earns three points. 20 (or any other critical hit): the dart hits dead-center in the bullsheart and the player earns five points!
Bullsheart Proficiency:
Note that players proficient in darts, a simple ranged weapon, may use their proficiency bonus in this game, but any NPCs who play bullsheart regularly may also use their proficiency bonus, at the DMs discretion. Maybe the tavern Bullsheart champion would have a proficiency bonus as high as +5, and local hunters would certainly have a bonus of at least +2!

Kreb is a large and imposing man and the owner of The Empty Net. While he came into ownership of the tavern suspicious circumstances, he has ran it for a few years without incident. Under his ownership the Tavern has enjoyed years of prosperity despite being one of the seediest locations in town.   He is quite loud when he does choose to speak, though normally a simple glare is enough to get patrons to wind down. The bar often gets quite rowdy before he would step in, and he simply forces those who break something to pay for it in the morning. Which is mostly for the inconvenience, a wizard stops by every now and then to mend objects that were broken throughout the week.   He grew up in Saltmarsh, and served aboard many fishing vessels before coming into ownership of the tavern.

Ichard is a young, charismatic man with silver streaks through his hair. He has a noble gate to his walk, though to noones knowledge was he raised in nobility. He talks with a smoothness and confidence that commands attention   He speaks highly and offers due respect to his master, Gellan Primewater. Ichard handles much of Gellans business and is the primary contact for the councilman.

Barney is an old trapper who spends much of his time at The Empty Net. He is a story-teller, and if a beer is set in front of him he will gladly tell you a tale. Whether these are entirely true is up for debate, and he has told the same story so many times that many of the details are embellished.   Despite this he is an entertaining and kind soul, and none in the bar bother him.

Bitsy is an unfortunate Goblin who has had a hard time fitting in with the residents of Saltmarsh. Many do not trust her kind, and despite her otherwise good nature she is often looked upon with suspicion in the town.   Because of this she has fallen on hard times and turned to illicit substances. She tries to sell them to others just to fund her own habit. Her only real friend is Kreb, and friend might be a generous way of putting it. He denies that she does anything under his roof as that would be strictly illegal by Bards Gates laws, but he seems to turn a blind eye to it.

Edilane was 16 when her parents were killed on the outskirts of Bards Gate when the Huun invaded. She evaded this fate, and later went to Saltmarsh to live with her uncle but was dismayed to find that he was now a drunk, barely able to support himself with various odd jobs. He lived in a group home, with four rooms and a conjoined privy and kitchen, requiring her to sleep on a cot in the corner. She vowed to leave these squalor conditions as soon as possible, and took up work at The Empty Net.   She is ever the optimist, and an average cook. While this wouldn't win her any awards, it allowed her to expand The Empty Nets clientele and the promise of food brought more money out of patrons. This has earned her plenty in tips which she has been saving, and she is excited to get a place of her home soon.

Jessie is a second generation Heldring whos parents came here years ago through Freegate. She is wild, and has a reputation for giving people an unnerving look. For years she has worked on an ocean-dwelling fishing vessel by the name of Fishfull Thinkin. Here she developed and proved her skill at tossing a harpoon, a skill that seemed to translate well to her passion which is a dart game by the name of Bullsheart. During the downtime when she is not fishing, she likes to spend her time at the Empty Net where she enjoys challenging patrons to the game.

Rikkem is a sorry man has been begging in Saltmarsh longer than most citizens have been alive. Even the oldest marshers remember him from their youth. Not much of him is visible beneath the rags and old sail cloth he has garbed himself in, his race is not clear (he is medium sized and has all the usual limbs).   When he gets enough coin from begging, he buys the cheapest grog from the Empty Net and passes out behind one of the fish warehouses. 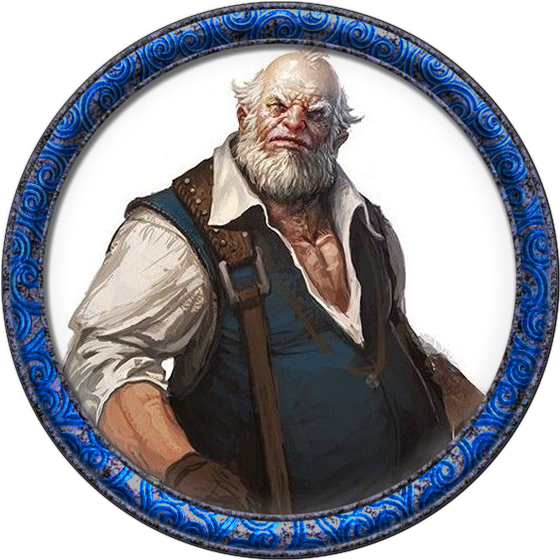 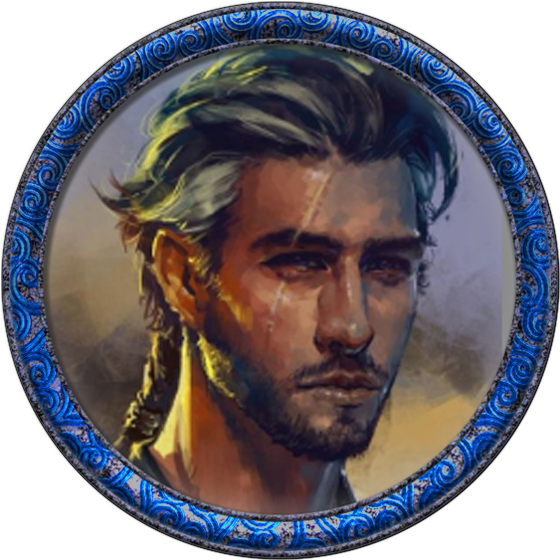 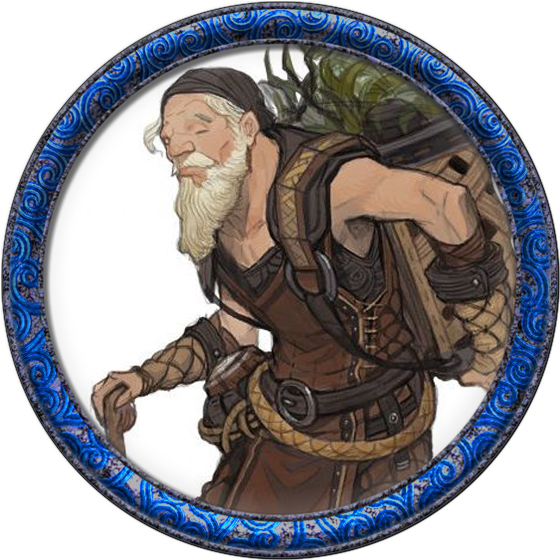 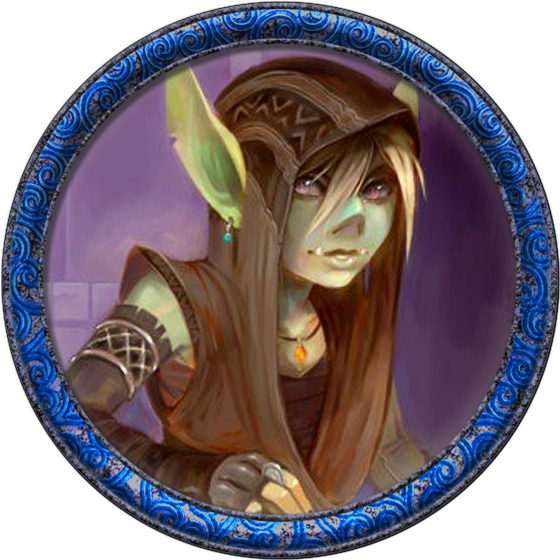 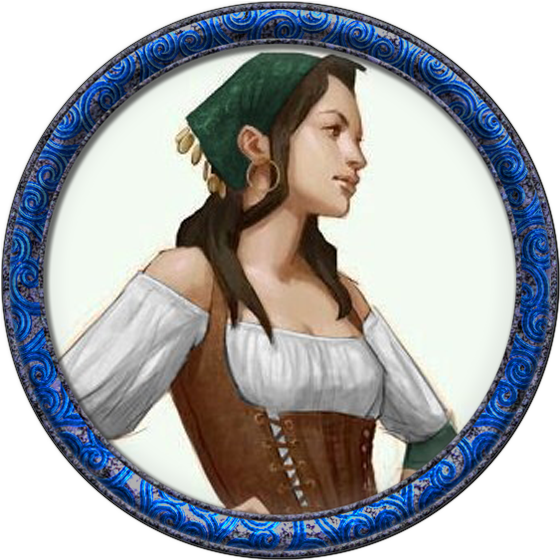 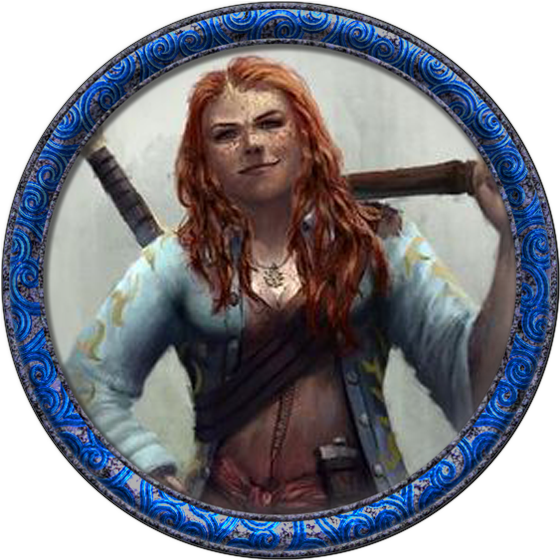 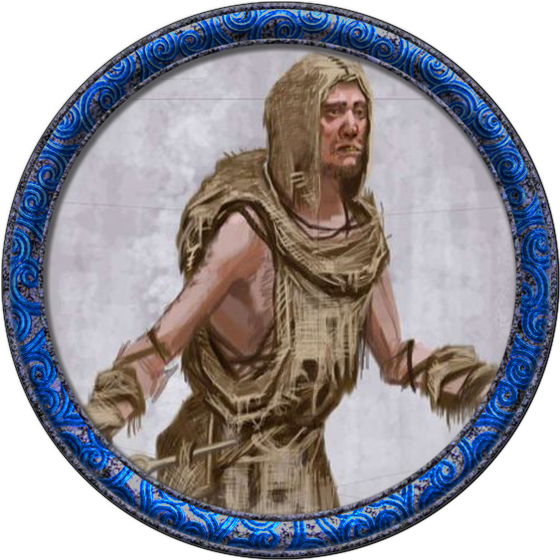