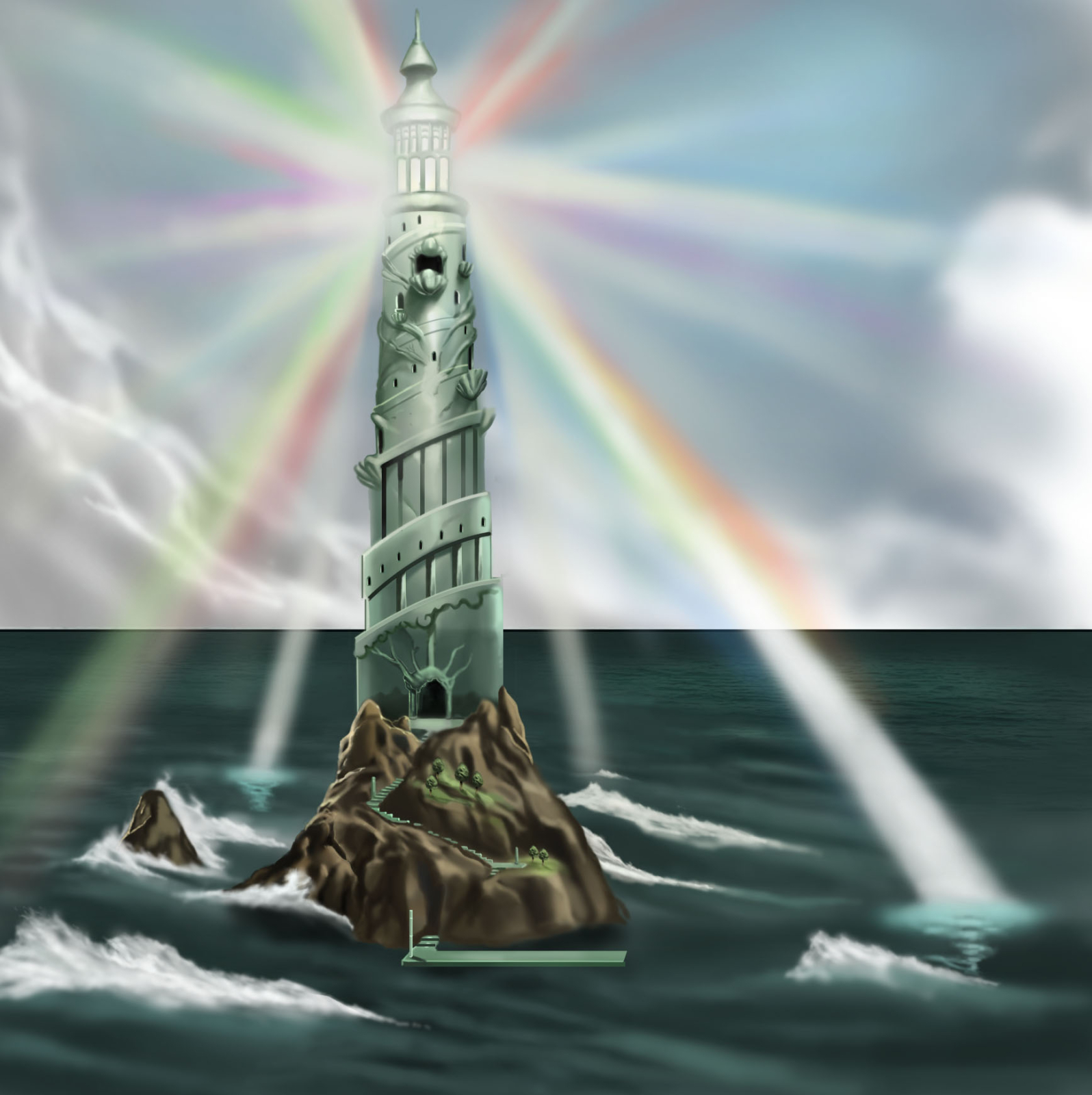 The Light of Palaemon
Rainbow Beacon
The Triton's Tower

"At last the men aboard beheld the Light of Palaemon
soaring skyward overtop the isle 'twas built upon
And broken sunlight e'er ascribed across the endless sky
The paths a sailor ought to follow with a wary eye.
A spire of glass and beams that shone across the azure way,
"This is the safest route, my friend", Palaemon seemed to say.
A vibrant strip of crimson raced t'ward the frigid north,
And then towards the southern pole, viridian burst forth.
Honey-golden yellow shot towards the coming dawn,
Violet luminosity the sun would set upon;
and in between the cardinals, a play of different hues
each one a line of life for wayward vessels and their crews."

-Excerpt from "Voyage of the Undaunted", Sygri the skjald, 105th Year of Enlightenment

Constructed entirely from living glass millennia ago by artisan triton Shapers, the Lighthouse's original purpose was to represent a covenant of peace between the Triton Schools and the Aaronic Empire. The crystalline glass tower collects and refracts light from the sun, splitting it into rainbow beams of compass light. This enigmatic array of glass faces captures enough light to be seen during cloudy weather, and the compass beams become a uniform mystical silver as the moons pass in the night. The beams travel across land and sea in each cardinal direction for thousands of leagues, allowing sailors to navigate by the color and direction of the beam they follow.

The altruistic nature of the Lighthouse's purpose is due in large part to the tritons' veneration of the sea-god known to humans as Palaemon, the patron of lost sailors. Though agents of the Universitas have never been able to confirm them, there have long been stories of lost sailors beyond the compass beams whom, having begged for the guidance of Palaemon, suddenly come upon the blue or orange beams which are not always visible like the cardinals, or even in the same place. It seems that Palaemon is not deaf to the prayers of mortals, and sympathetic to their plights.

In the 762nd year of Enlightenment, the Universitas Omniscia conducted experiments on the Lighthouse in an attempt to decipher certain physical properties of living glass. Near the top of the Lighthouse, a circular platform was constructed and anchored, to allow the alchemists and logicians of the Universitas to study it closely, near the locus of its function. Over a number of years several experiments were conducted, and though the men and women involved would say differently, very little of value was truly learned.

One notable innovation was the addition of a large focusing lens, which was built onto the structure of the observation platform. It was theorized that the addition of the lens would strengthen the compass beams; unfortunately not one of the scholars or arithmeticians sent by the Universitas could devise a way to accurately measure the brightness of the beams before or after it was constructed, so very little was learned other than the precise cost to build a large focusing lens at slightly higher than 200 feet in the air. Due to the added weight of the lens, the platform had to be counter-weighted to prevent it tipping, and the combined mass of the addition caused minor pressure cracking along the surface of the Lighthouse. This was seen as an affront by the Triton Schools, and King Volturnus made the first triton appearance on dry land in five thousand years to expressly forbid any further modification of the Lighthouse. The additions were left in place, and the Isle de Sangre given a certain berth to avoid antagonizing the fish-men further.

The lighthouse stands 300 feet tall, and sits atop the Isle de Sangre, putting its uppermost tip about 490 feet above sea level. Across its base the lighthouse measures seven meters, and tapers to just more than two meters at its narrowest point.   The ancient mer-steel used in the Lighthouse is of a particularly durable and crystalline variety, found to be nearly invulnerable to all manner of damage or penetration. Affixing the observation platform to the tower was only achieved through means of large leather slings and iron bracing.
Type
Lighthouse 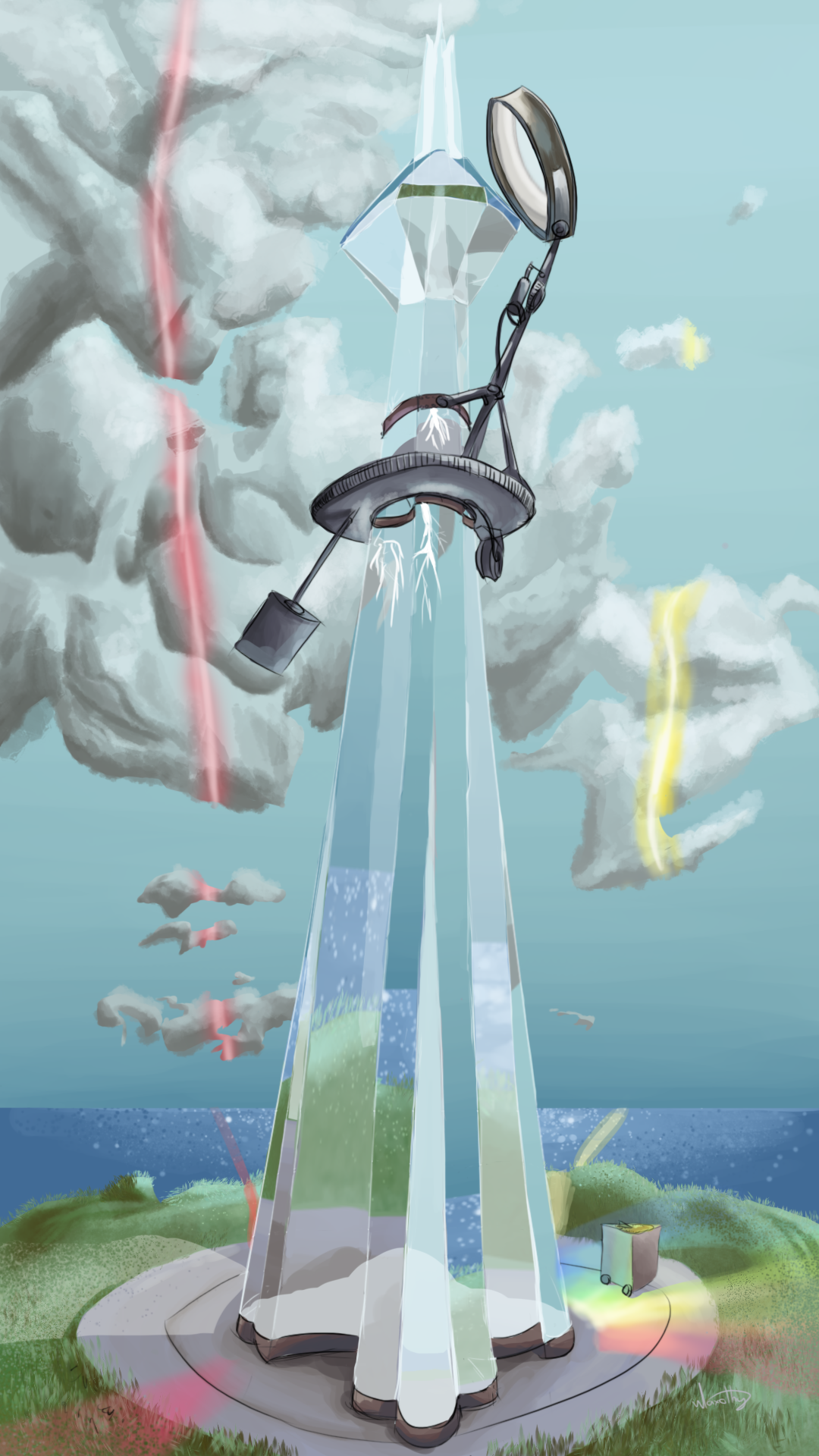 Answering: "Describe the most impressive landmark in your world."
Visit DancyLad's Competition Page Check all other answers to this prompt Competition Homepage