The fungaloids came near the zenith of the short-lived draconic empire. When her armies stood strong and unified, when the various dragons were in accordance, and when the ‘fuel’ for the furnace of war seemed limitless.   The fungaloids, like many ‘plant humanoids’, came with what scholars have deemed the ‘Fourth Wave of Draconic Eugenics.’ The dragons, largely satisfied with the merging of humanoid with animal in the ‘Third Wave’ looked for further inspiration. Seeing the natural world, ever more esoteric mutations and creations were made with plant-like trates.   The dragons began designing new species and refining past works for their modern extravagance and wants. Individual dragons were even outright encouraged to create their own servants, tailoring them genetically to their whims. So it was the the fungaloids were created at the request of Shazzrithk the Blind Father. 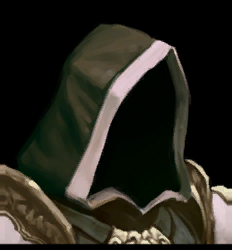 “Shazzrithk. Or Shazzrithk the Blind as the dragons knew him. A misnomer, and cruel. But the fact his name survives to this day stands as testament to his kindness. Shazzrithk the Blind Father.   Born in a clutch of blacks, Shazzrithk himself suffered from a genetic defect and was thus ostracized in the eugenic-laden world of the dragons. Where the lesser races and servants were fit to be ‘molded’ but pure dragon blood was not to be touched.   He hatched at a time that the Dragon empire was still growing. Their twin capitals of politics and science flush with riches and prosperity. His life should have been one of luxury and potentially leading an army to war for personal fame and glory. Instead, his scales, while black, were brittle and near translucent. His eyes milky white and stabbed by the harshness of light.   Originally shunned for being weak, Shazzrithk took to the wilds of Eden. He lived in caves, sleeping through the stabbing pain of day and hunting by night. Little more than a primitive preying upon livestock, the dragons felt they had to ‘solve’ the problem he was becoming. Thus, in a fit of prideful concern, other dragons bestowed upon him a gift. Servants. They asked what beautiful bodies they could build for him, how strong a laborer he might need to till fields for him or keep livestock. They sought to fix his woes without truely addressing the greatest one. His loneliness..   So it was that Shazzrithk offered them a humble mushroom from his cave.”
— Lord Scribe Galdiel

The dragons merged a number of fungal features into a human experiment, thus creating the first ‘fungaloid’. Shazzrithk soon was given the small, innocent being and he vowed to avoid the livestock of his fellow dragons for this boon.   Shazzrithk for his part was in aw. This small creature was kind, and tried so very hard to be helpful. She was adorable to the ailing dragon, and perhaps wonder of wonders, she glowed every so lightly in the darkness. A light that did not hurt the dragon’s weak eyes. So it was that he cared for her even as she won over his lonely heart.   Soon the fungaloid spread, more and more sporelings appearing as Shazzrithk loved each and every one. Naming them and treating them not as servants but as friends and family. Even as they sought to make him more comfortable quarters or to shield him from the sun, he would hunt for them all before their numbers proved great enough to care for him as well. At which point they insisted he not go out into the ‘stabbing sun’.   The fungaloids nearly revered the dragon, caring for him even as he was mocked for being the ‘king of the mushrooms’ by his fellow dragons. His cave was dug deeper with every passing year, tunnels dug by his talon and the hard, eager work of such a kind and industrious race.   As time wore on, the fungaloid city grew and the dragons crew curious. Seeing the prospering fungaloid society and high reproductive rate, the high draconic council saw promise in what was once written off as a ‘failed experiment to appease a lesser dragon.’. They demanded the Blind Father hand over samples of his children to be incorporated into the genetic research.   He refused, cordially. He asked them to consider how it would be impolite to re-give what was given to him. Instead of having one of his children disected, he instead offered them many mushrooms from his cave, claiming that a ‘blank slate’ would be preferable to build any weapons or laborers upon than his ‘little ones’.   The dragons took his mushrooms greedily. They were assuaged by his words, fooling themselves into thinking the tiny, runtish creatures could not be properly useful. So it would be, originally these mushrooms from the Blind Father’s cave, and soon after from all over the empire, that would be turned into the ‘second fungaloids’. Often built differently and purely experimental, many were discarded. Shazzrithk took them in.   Many heard of his kindness and openness, and some slaves who ran away sought refuge in his cave. Though these humanoids, dwarves, humans, elves, and others, all were ‘light-walkers’, and though their light pained him, Shazzrithk gladly let them into his home and the city the fungaloids made under his cave. With such ‘civilized’ humanoids helping his children, the city began to take on an organization and stone finish, a conglomeration of inspirations that formed an oddly different-yet-reminiscent of a dwarven city.   Sadly, not all was good. The blind father grew too quickly, his body growing too weak. The cave was expanded so that he could simply rest comfortably as his length grew more and more into the mountain. The ‘failed fungal experiments’ of the dragons were no longer ‘released’ into his custody and were instead refined in cruelness and darkness. It was this weaponizing of the fungaloids that would lead directly to the <Fungal Plague Incident> on <planet>.   As time passed, Shazzrithk declined further until, one day, he finally passed quietly in his sleep, in the comfort of dark surrounded in love and mourning by his children, fungal and adopted. His body, brittle with his malady, nearly fell apart as his final breath exhaled and filled all his children with one final warm flame of love in their hearts.   And so the Fungaloids came into their own, the city of ‘Shazzakin Boleta’ became uniquely peaceful and independent. The first great city on Eden to became independent of the dragons, and the only city to become independent peacefully and before the dual angelic-demonic conquest and fall of the draconic empire.   Shielding his final resting place forever from the light, the city became renowned for their stance of equality and compassion. Their small stature making them hidden from those from malicious intent.   Their collective breast full with the flame of love as they created a <religion of peace>. It is for this love, his love, that Shazzrithk is revered. His children creating a religion of love, teaching the ways of their father in the broken world of Eden, and attempting to bring the love of their dragon to their estranged brothers and sisters.