The major currency across the world, Rupees are semi-magical gems that come in a variety of colors. These gems are valued for the magical Essence they contain which can be used to operate technology or magic items.   Rupees are roughly 5 cm tall and 2 cm wide with a slightly thicker, raised center. Their shape is an elongated hexagon though larger Rupees become more squat. The appear to have been cut uniformly, but this is just an aspect of their magical nature.   When multiple Rupees are held together, they can begin to merge, becoming a larger Rupees that is valued as the sum of all the smaller Rupees. The physical maximum is the Golden Rupee, valued at 300. Taking Rupees apart takes considerably more effort, but is doable by most. Merchants tend to be exceptional at this, sometimes turning money changing into a showman's art.   There are 7 confirmed types of Rupees. In order from least valued to most they are; Green, Blue, Red, Yellow, Purple, Silver, and Gold. Occasionally, Rupees of the same color stored together for long periods can become a Large Rupee, valued at 5 times the colors normal value.

Mercantile rumors and antecedent speak of a black Rupee, the terror of every merchant from the Necluda Sea to Hebra Mountain. Possession of this Dark Rupee is said to drain the color and energy from normal Rupees. No merchant has ever held one, but they always know someone that knows someone whose uncle went bankrupt from one of these pitch black gems. 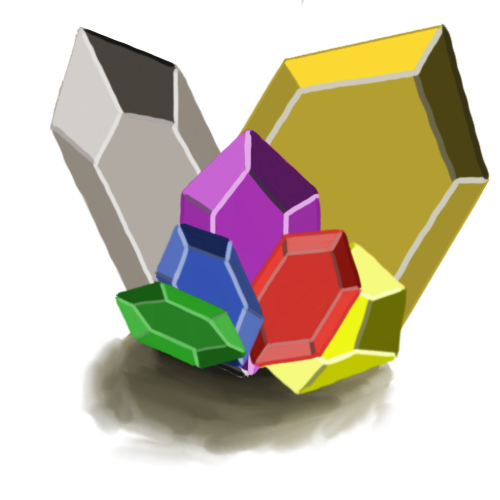 This is a Fan work. The Legend of Zelda series and all elements which appear within it, are registered trademarks of Nintendo. No claim is made as to the copyright of places, characters, concepts or themes found in those works, as they apply to this Fan Work.

Oh I like the idea of coins merging together to form bigger coins! And merchants making a show of breaking them apart is fun XD Great article!