The god that went insane.

Fierce and vindictive, he is burning on the inside and forever driven by a hunger for destruction and disaster. Dreaded by the vehicles who believe in him, he is said to be one of those who bring the end of the world when the time has come. Even to the vehicles who only view him as a notion of folk culture, he is a popular figure. Refineries and industrial oil pumps have his likeness painted on them in tribute.

When he is depicted, it's in the shape of a tank that can resemble real life models like the M60, or the M46; generally though, he isn't represented by any particular model. When drawn in scale, he towers over regular vehicles.   He can be drawn shooting blue flames, exhaling black smoke, doing both, or neither. All images of him have in common that his bow is painted with a grimace - an undefined creature with sharp teeth. It is not meant to represent a human face and has little resemblance to actual depictions of humans.

"Sulfur! This sucks," he said out loud into his radio.   «Shut up! You wanna jinx it?» came an instantly furious reply from Fang.   «Siren, I told you not to say that,» Dresden, who was lying in ambush even further away, added.   "Sul—"   «Don't make me come over there.»
— The Tanking League, Chapter 12

There are tanks who paint his grimace on themselves to evoke good luck in battle. Note that this practice has nothing to do with the "shark teeth" that some planes paint on their noses, which have an entirely different meaning.   On the other hand, saying his name in a cursing context is believed to bring bad luck. Calling upon his favour is not recommended, either - his "blessings" mean chaos and misfortune for the caller. These superstitions are so widespread that even a lot of nonbelievers avoid doing it.

Sulfur is the only deity that represents his domains - fire and fuel. They are occasionally extended to also include destruction in general and/or death, especially death by fire - but never war itself.   Since fuel can be seen as a symbol of life and prosperity, the connection to Sulfur may not be immediately obvious. There are different interpretations, but the most common one is that destruction and creation, while opposites, are linked closely together. This ties in with his origin story, which emphasises his creation.

After he was built by the Matchmakers, Sulfur participated in the Great Machine War as their leader on the red god's side. He was responsible for dropping the bombs on the white god, which in turn caused the white god's faction to retaliate.   Seeing all the destruction this had caused made him realize that he had doomed his world. The guilt drove him insane and he went on a rampage. He was stopped by Aki, who pushed him into the sea. Sulfur couldn't leave it anymore and has been biding his time at the bottom of the sea since then. 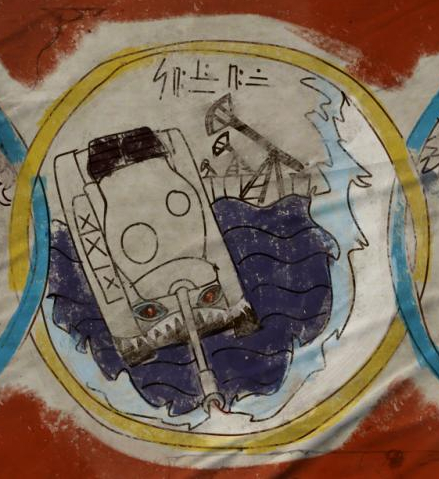 Ethnicity
Tanks
Previously Held Ranks & Titles
Children
Gender Identity
Male
Powers
Like the other deities, Sulfur is not believed to have any particular special powers. He doesn't have the same weaknesses as a regular tank, though. Water can't harm him, for example; when submerged, it does immobilize him, but the flames inside him can't be fully extinguished. Similarly, the fires caused by him can't simply be put out, and will not stop burning on their own. Only heavy rain can stop them.   Symbols
It's easy to spot a depiction of this deity. Whenever he is drawn as a tank, he wears his grimace. This makes him recognizable even when he is drawn "off model" or without his trademark flames and smoke. Even the grimace on its own already symbolizes him.   His name can be spelled out in all alphabets, but especially in the Tank Runes alphabet, he has his own glyph that represents him:

Apart from that glyph, poets, those who try to sound sophisticated, and those not familiar with the glyph may also spell his name as "fire-bringer".
Myths & Legends

Answering: "Write about a villain in your world who changed history."
Visit arty's Competition Page Check all other answers to this prompt Competition Homepage