The Hummelverse    Trivia    Society      Tank Runes
While other alphabets are still known, the tank runes have mostly taken their place in the everyday lives of the machines. Being able to read and write other alphabets is considered intellectual. The 'rivalling' alphabet is Cyrillic, which is still fairly widespread in the Known World, but especially in the East and among vehicles coming from there. A lot of vehicles use a variation of tank runes that incorporate letters closer to Cyrillic letters. 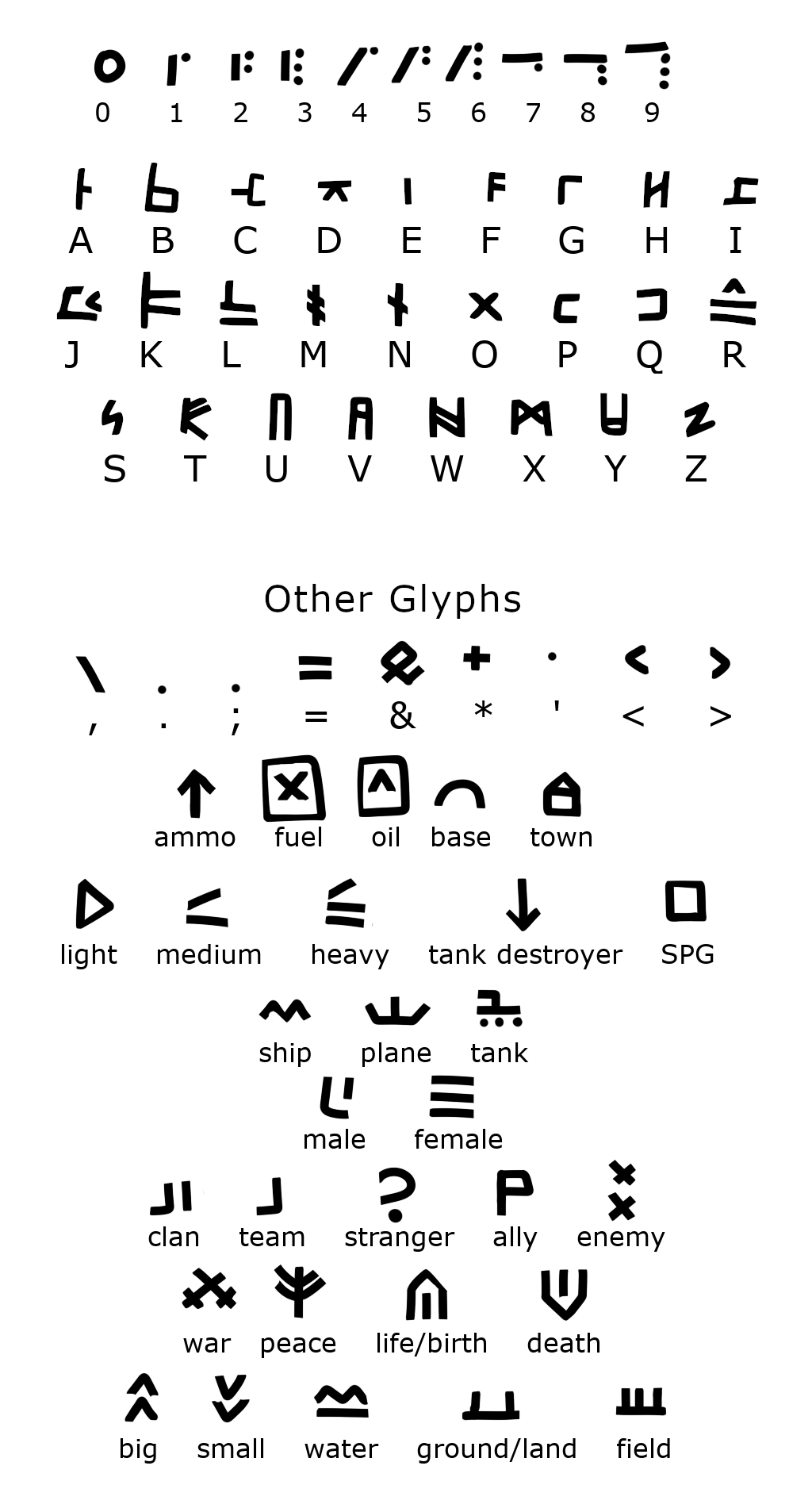 Note that only capital letters are used. There are no lower case letters in this alphabet.

Due to the alphabet being effectively in its infancy, much confusion and inconsistency is to be expected.   Handwriting may differ (even greatly) from the 'standard' tank runes shown above. Some regional variations may be different to the point of looking like their own language. A common way of altering the letters for faster writing is to make the more angular ones rounder than the original; connecting some or all of them in some way is considered a 'writing sin', but that doesn't stop people from doing it anyway.   Among educated individuals, suggestions for changes to the alphabet have been made to increase readability. For example, it was suggested to change the letter 'P' to feature a dot instead of the line next to it, to avoid confusion with words using 'QE'. This suggestion has been met with indifference for the most part, as such combinations are rare in the dominant languages and usually only appear in misspellings. The letter 'U' is also discussed, as confusion may arise when one tries to spell 'VB'. The same discussion applies as to 'P', however.   Other cases, like the rune for 'TEAM' in conjunction with the letter 'E' looking very similar to the rune for 'CLAN', or the possibility to confuse '2' with 'EB' are dismissed as people simply writing too sloppily. When writing 'properly', as the educated ones call it, 'E' should always be elongated to make the distinction clear when these runes are used together.   In any case, making any sort of official change to the language would be difficult, since everyone is pretty much doing what they want anyway.   There are also some common misunderstandings which arise from the internal 'mapping' of the letters. 'ENEMY' is sometimes used as '!' and vice versa. The same applies to 'STRANGER' and '?'.   All of the above assumes that the individual is fluent enough to run into these problems in the first place, of course. When letters are flipped, omitted, replaced with fantasy creations, or confused with each other for other reasons because the writer is struggling with the basics, a whole different can of worms is opened.

Contains equivalents of all letters of the English language, but also special prefixes and letters that represent whole words. Example: Clan names have a certain prefix, class names are represented by a single rune.

Widespread in the known world.

Follows the general syntax of the respective writer's language, although regional variations and incomplete sentence fragments or single words that stand for whole sentences are common.

Covers most words that are needed in an everyday context - such as words relevant to territory, fighting, and model designations. Extended vocabulary includes interpersonal and spiritual expressions, although those are often substituted by mashing words of the basic vocabulary together to accomplish the same effect.
Example: Instead of the runes for "afterlife", the runes for "peace" and "field" can be combined to convey the same meaning if the cultural context is understood by the reader.
Even though Tank Runes are generally a pretty simple written language, there are big differences in use between more educated individuals and the general populace. While trivial communication is precise and done using only a small part of what the language is capable of, older scripts and poetic texts employ metaphors and kenning, as well as complex syntax.

To make matters more complicated, many of the self-proclaimed scribes actually had/have a poor command of the language, creating texts which are almost illegible due to misspellings, straight-up made-up words, and convoluted grammar.

On a related note, many vehicles, no matter their level of education, spell phonetically. Some do it because they insist it is an 'improvement' of the language, others simply don't know any better.

In summary, one could probably say that tank runes are quite a mess of a language.
Society

The Hummelverse and The Tanking League are my creation. All content - including art - on this page was created by me, unless otherwise stated.
Want to submit content like fanworks, ideas, characters? Please note that you are accepting these terms if you do.
Back to top
Article template
Language
World
The Hummelverse
Category
Society in Trivia
Author
arty
Publication Date
4 Apr, 2020
Creation Date
20 Feb, 2018
Last Update Date
7 Apr, 2018
Visibility
Public
Views
1221
Favorites
10
Comments
0
Work In Progress
Tags
trivia