The Five Sisters is the name given to the wreck of five ancient ships lying on top of one another at the bottom of Loch Morgunt.
The tops of the wrecks can still be seen off the lakeshore at a place called Kinbeath  on the lands of Clan Ravenscraig.

The wrecks are clearly visible from a boat but are difficult to access by the shore. At this place. the shore is bordered by The Forest of Greenwode, and very few know the paths through the woods that lead to the coast.

Only the masts and the prow of two of the Sister ships can be seen jutting out of the water. No one knows the origin of the disaster that made five ships sank in so close proximity, and a lot of stories have been invented over the years to explain the catastrophe.

Some of the retellings might have a kernel of truth at the bottom of it, however, it is hard to tell. Archivists have been pouring over the ancient texts in the still-existing regional libraries to find out more reliable stories about the event but to no avail.

The wreck has always had a very bad reputation and is well known to be the home of ancient spirits who become very uneasy if warm-blooded creatures come near. Usually, the boats plying this side of the Loch stay well clear of it.

From the few people who have been near the wreck, it has been ascertained that five ships make up the totality of the wreck. Most Historians also agree that the ship, by their shape and defining parts are very ancient, and do not correspond to any current models.

Despite the obvious damage caused at the moment of the disaster, the ships are suspiciously well preserved. This has given rise to the theory that the timber they have been made of is magically enhanced - like the timber of The Wooden Bridge of Yarma in Sutherlands.
By design, each of the boats is huge by modern standards, and consists of pyramidal floors that taper to a series of turrets at the top. The forward deck sports a huge decorative (?) bird-like prow that rises menacingly well into the air and is, on some of the ships, nearly as high as the pyramid tower itself.

Many drawings have been made of the enormous prow that can still be seen rising out of the water: a swan-like dark bird whose huge glass eyes glow red in the sunset. From the rigging and other detail, it is safe to assume that these were warships.

Many have tried to tie in the wrecks with some of the numerous mythical wars fought by the Old Clans and the Ancestors but nothing concrete has yet been found to link the Five Sisters to a precise battle or conflict in time.

The name, the Five Sisters, was given to the shipwrecks in an old tale told to the children of Clan Ravenscraig, and it has stuck.
According to the legend, there were five sisters born to an old clan chieftain whose lands included the whole of Loch Morgunt and its shores. The five daughters were all very beautiful, but very spoilt and willful.

They grew up to become power-hungry, and when their father died without a male heir, they fought among themselves to succeed at the head of the clan. The clan was divided and families took sides for or against each of them.

The sisters, keen to have the upper hands in the battle of succession, built each their own armada. They even recruited the most powerful druids of the lands to enchant their galleons and make them invincible.

On a fateful day of Fogamm, at sunrise, the sisters' warships clashed and a mighty battle ensued. Because the five fleets were so powerful and so evenly matched, none could overcome the other, and because the sisters were so sure of their victory and could not face defeat, they sent their ships time and time again into battle.

In the end, the five fleets were decimated, and the five sisters lost their war. As the chieftains' daughters fought mercilessly against each other and depleted their forces and strength, a rival clan from the north seized their opportunity and invaded the Sisters' clan lands and took control of their territories. The five proud daughters were sold into slavery to a southern kingdom and were not heard again in Alven.

Many clans have similar stories in their clan legends: unruly daughters or sons putting the clan into danger, destroying each other, and letting a rival clan take advantage of the lack of unity among clansmen. They serve as illustrations of the terrible consequences a disunified clan could face in reality 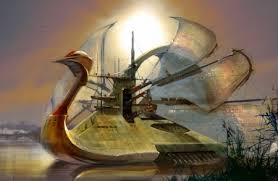 Reconstruction of one of the Fives