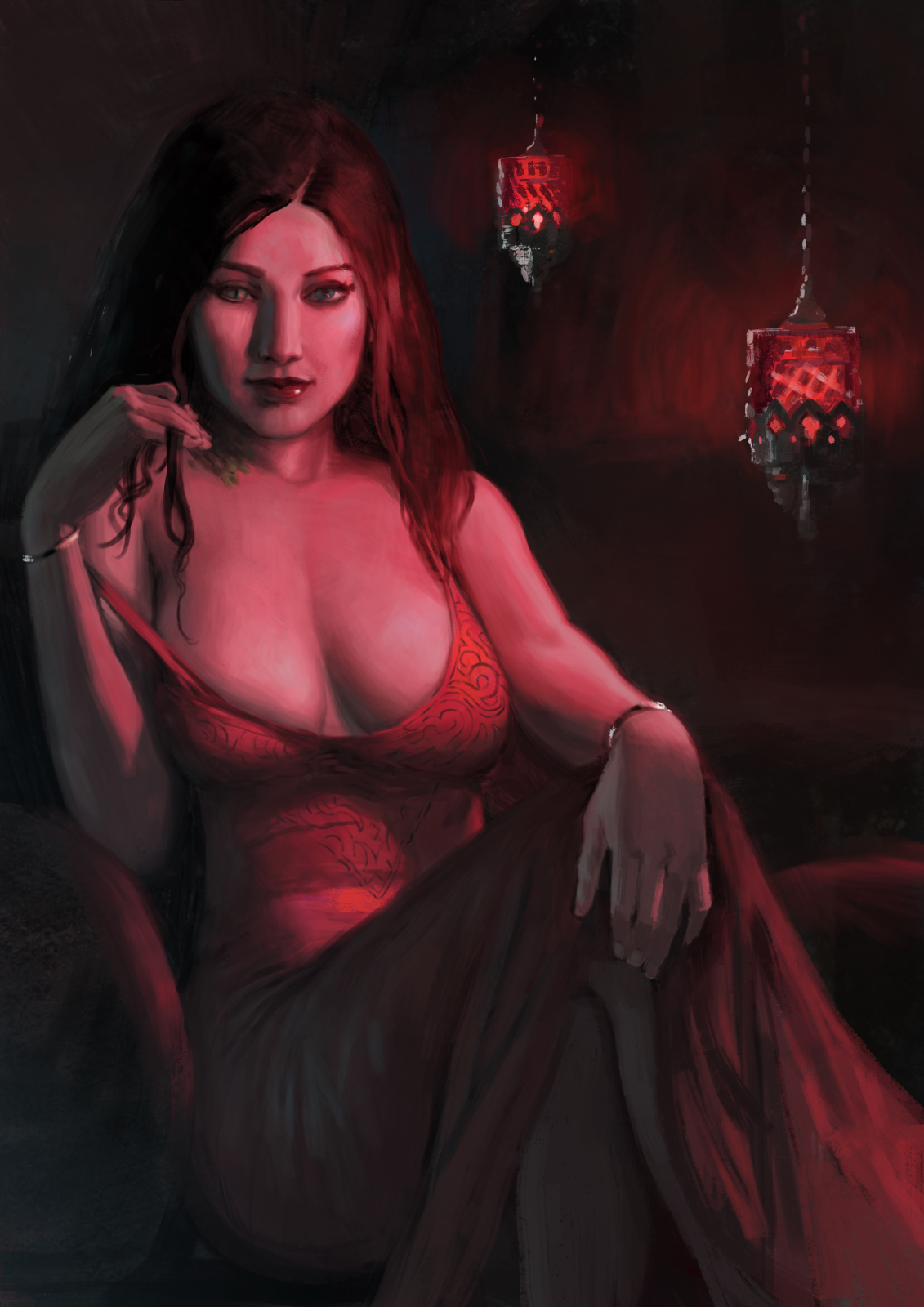 That war left a lot weapons behind , but only one that could smile so kindly and look at you with such lovely eyes. Course' underneath that smile there was only fangs. And behind those eyes nothing but a snake.
— Hannibal Seward


Most races owe their existence to nature hands, the grace of the gods, or the bridge between worlds known as The Gates. Perhaps even a combination of those factors. However; for the Lamiah, the question of where did we come from is both easily answered and deeply disappointing. They were weapons of war born during the waning days of a conflict their makers could not win. They, like the Fang Crusades themselves, were largely forgotten by the rest of Tairos. And yet, like many of this land's buried secrets, they are coming to light once more. What role they may choose to play in Tairos' salvation remains to be seen though.


Too Late to Turn the Tides

The genesis of the Lamiah begins in the city of Jagged Spur in The Serpent Lands. Jagged Spur is the second city dragged forth into reality by the Ximezci' black sorcery and the one responsible for innovation and infiltration of the worlds they wished to feed to Oblivion. In the early stages of their holy war that meant crafting new and horrible living weapons, transferring the minds of Ximezci into fresh humanoid corpses, and even creating "bespoke" bodies for some of the most-cherished zealots of their species.   The Serpents found using agents hidden within the bodies of native Tairosians to be particularly effective in disabling or compromising enemies that would otherwise challenge them. However, the process of transference was cumbersome at best and wrought with failure points all through the process and even beyond during deployment. Instead, the flesh-shapers of Jagged Spur began designing a new weapon. One that didn't require bodies from another species, that didn't need a Ximezci mind to be transferred, and one that they needn't deposit into the host city. This weapon was a new form of Ximezci, one born in the shape of a humanoid but with a seed in their mind. A seed waiting to sprout and blossom into as loyal an acolyte as any true member of their kind.    And... even more importantly, one that could repeat the process over and over inside their very womb.    The first Lamiah were babies born in the spawning vats of Jagged Spur and placed within host cities as orphans to be raised by the enemy. Their only task was to grow, to mate, and to give birth to more Lamiah. For this reason the Lamiah were designed by their creator to be female and to only give birth to more females. The womb of the Lamiah was tailor-made to be as precise as the spawning vats themselves, something that was not possible to ensure using a Lamiah male and relying on the womb of a host-species female.   However, the full realization of the Lamiah project would never come to pass. The defeat of the Ximezci came quicker than expected thanks to efforts of the The Grand Concordance of Tairos. Many Lamiah were put in place but the Ximezci seed within their minds never activated. And, as the ages past and generations of Lamiah came and went that seed withered.

No matter how closely a Lamiah might have resembled the host people she grew up alongside eventually their secret would threaten to reveal itself. It could be the brief flicker of serpentine eyes, ripples of scaled skin that quickly fade back beneath the surface, or even bared fangs in a moment of tension or fear. Without their creators or the seeds of the Ximezci psyche in their minds to give them purpose the Lamiah have lived lives of uncertainty, confusion, fear, and persecution.     They are outcasts without a single remaining thread to trace their origins to. Their heritage was left up to angry mobs to decide as they chase terrified individual Lamiah from their homes. Frostmerites believe Lamiah to be the product of Cinderstone and their wretched god Ephias The Chain Maker. Isolated communities like Talbot, Rylan, Pentram and any of the townships in the Balmoran Plains would associated them with a more recent enemy such as the Fae. Melanthris is the only nation that remembers the origin of the Lamiah and have taken steps to purge any bloodlines that might have serpent blood in them. However, there are rumors of Lamiah born in the elven peasant lands where ignorance is rife and such births are blamed on the Wrack.Similarly, Locklanders would look at such creatures as the product of impure mingling with non-humans.     In fact, the only place a Lamiah might be able to carry on unnoticed without having to retreat into the wilderness are diverse city-states like Frial, Tengu Town , and of course Ghal Pelor. In the distant corners of these massive urban settings a stranger with even stranger quirks is not such a rare thing.     That all said, for some Lamiah, the Ximezci seeds within their mind are not truly dead. Some of these individuals have flashes of memory and alien urges that cannot be explained. This might manifest as voices, dangerous cravings to kill or to create more Lamiah children, and even a pull to return to the Serpent Lands. These rare few are slowly remembering their purpose, the grand plan of their creators, and are now stepping into the void they left to finish what the Ximezci began.

Lamiah match the host species they've been born into. This is generally human. Halfling, elven and half-elven Lamiah are also known but far less common.

Lamiah reproduce via sexual intercourse but their wombs were designed to only produce females. The only exception is between a pairing of Lamiah and true Ximezci. Such a union would produce a Ximezci as well though the birth is often fatal to the Lamiah mother.

Lamiah mature at the same rate as the host species

Generally matching that of the host though the face is often host to one of the ticks that may give away their true nature. This can be anomalies with the eyes briefly appearing serpentine of flutters of snake scales passing across their face for a moment or so and the deployment of fangs that would otherwise be hidden in the jaw behind the incisors.   Some of these malfunctions can become permanent with some Lamiah or at least require a massive amount of concentration to suppress. It should also be noted that the more a Lamiah explores the Ximezci thoughts and urges within her mind the more her serpentine features will rise to the surface. This can take the form of permanent scales, larger fangs that cannot be hidden, serpentine eyes fully capable of Darkvison and in some cases the ability to dislocate their jaw and swallow prey whole.

Most Lamiah are going to come from regions targeted by the Ximezci during the Fang Crusades. Old Balmoral was the most heavily seeded by the Serpents though thanks to The Autumn Queen little remains of this once-great nation other than scattered ruins. However, if Lamiah bloodlines from Balmoral exist today they'd be found in Frial.     However; cross-continental travel and trade have all but guaranteed that the Lamiah can be found anywhere if one looks hard enough.

Lamiah are known to have excellent olfactory senses. They do not possess the darkvision common to their parent species though their eyes do offer some assistance in the form of low-light vision. There eyes are able to make use of even small amounts of light to see reasonably well though far from perfectly.
Genetic Ancestor(s)
Origin/Ancestry
Arcane
Lifespan
same as their host species
Average Height
varies
Average Weight
varies
Average Physique
Similar to host species but generally healthier and more physically attractive than the average. This is by design.
Body Tint, Colouring and Marking
Again, matching that of the host species. However; the ticks that often give away their true nature will appear on the body first and either during or just after puberty. Or, after moments of high stress. It is believed that without the Ximezci psyche growing in their minds the body is often prone to malfunctions of this manner. Examples include patches of scales that may appear on the body, shedding skin, or similar.   Some of these malfunctions can become permanent with some Lamiah or at least require a massive amount of concentration to suppress. It should also be noted that the more a Lamiah explores the Ximezci thoughts and urges within her mind the more her serpentine features will rise to the surface. This can take the form of permanent scales, larger fangs that cannot be hidden, serpentine eyes fully capable of Darkvison and in some cases the ability to dislocate their jaw and swallow prey whole.
Races