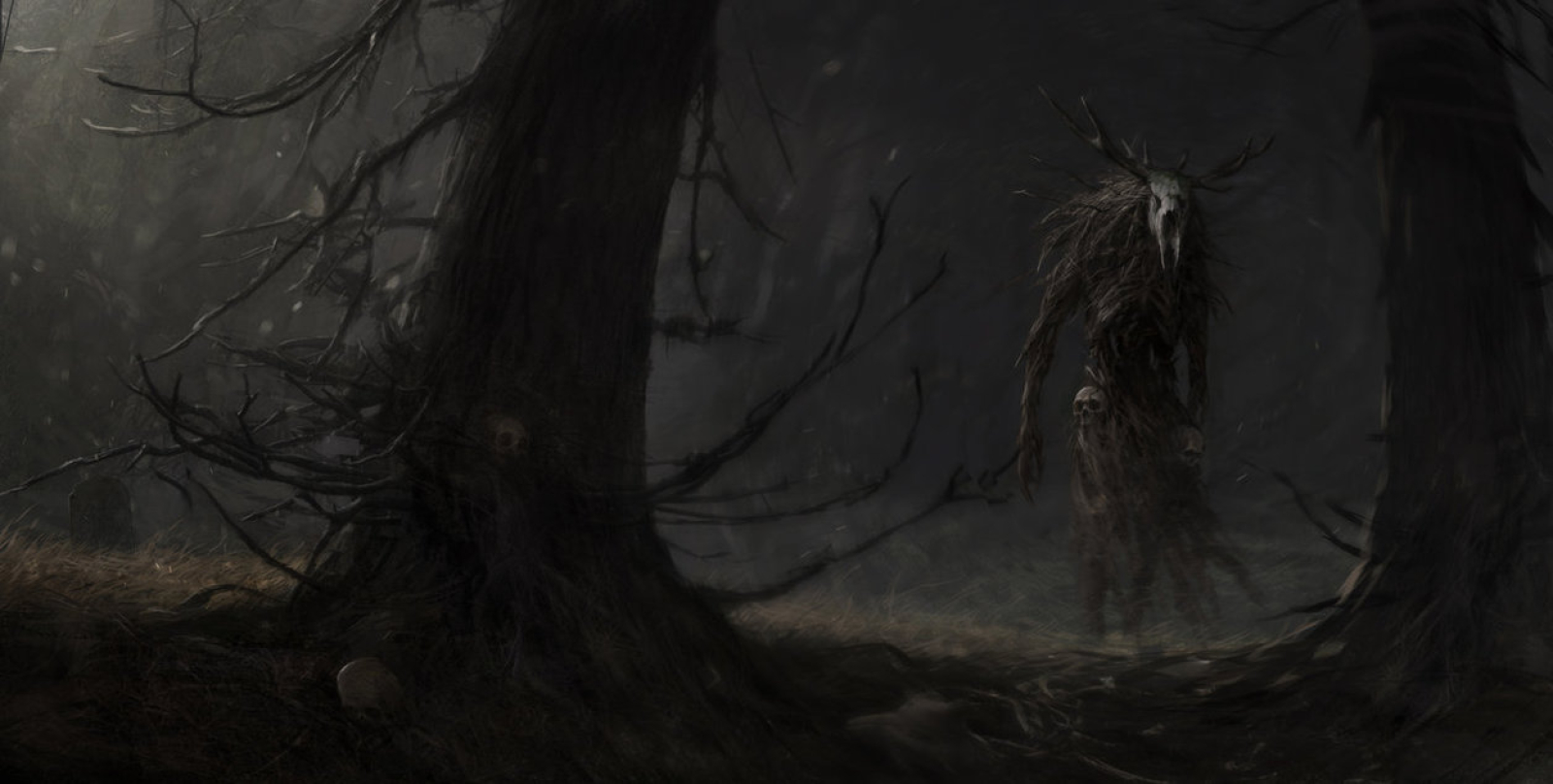 The Lord of the Feast

Hunger in physical form, the Lord of the Feast consumes without eating a morsel of food or flesh.

The Lord of the Feast, also known as the Famished Hunter, the Herald of Hunger or the Red Eyes of Madness, is a Feybeast of legend that stalks the forest of Larendalyth and the surrounding areas of the Krovandir wilderness.

It... it was the smell we noticed first. The worst shit you ever took, the kind that runs down your leg and keeps going. Now mix that with the putrid stink from a battle wound of a warrior you just carried for three days and you know is going to die. It makes you retch and gag, but no... for some reason even though your stomach is heaving, filling your mouth with bile, you somehow think that this smell is better than the sweetest flower... more fragrant than honey.
We were in a blizzard when the smell reached us. Frigid sleet filled air lashed into us, it had already chilled us to the bone, our faces red and numb. And yet... that smell, it worked its way into our noses.
We all stopped, unable to move as we retched and gipped. I could barely see Ulfi and boar, though he was only a few feet from me. Einar beyond him was a mere grey shape. Then they appeared - two points of light, twenty strides in front of us cutting through the storm as if weren't something to even consider. I knew they were eyes, even though they were just crimson blood coloured pools of.. of... hunger and malice.
I turned and ran. I heard the heavy thud of Ulfi dropping the boar... not that it helped. Einar's screams, coughing, noises.. I don't know, they got lost in the winds.
I ran, and I pissed myself. And I still ran.
I'm no coward, give me a blade and I will face any man in battle. But that is no man. That is evil.
— Gilby Halvarsson

The description of the Lord of the Feast, is taken from the incoherent utterances of those that have survived an encounter with the horror, is that of a gaunt human like figure that stands 7 to 8 feet in height, an antlered skull sitting atop its shoulders caging baleful red eyes, and elongated arms that stretch down to its mid thigh joining long fingered hands that end in iron-hard claws. Its skin is pulled taut across withered thin limbs and fading musculature. The horror's torso is either hollowed inwards with the apparent effects of starvation, or its rib cage is exposed with desiccated crimson organs on show. Lastly is the smell that moves with the Lord of the Feast - a mixture of bile, feces, blood and the ripe stink of rotting flesh that hangs heavily in a miasmic cloud.
Other variations in the Lord's description have them roughly clothed with a garments of leaves and feathers, tattered cloth breeches, and a rough belt on which hangs a skull or a bloody limb or two; or else it strides naked, dark loam coloured skin that drinks in the moonlight as it moves, and a hooded mantle of leaves hiding its visage. Another account held the Lord as a cervid-man hybrid, complete with tattered mottled russet buckskin stretched across human arms, whilst walking on the hooves and legs of a deer - but still the piercing red orbs peered out from an antlered skull.


Beautiful Ingunn, she was the closest, almost in edge of the forest. She knelt in the snow, her babe at her breast, and just sucked the end of her finger a couple of times. I heard her faintly laugh and say "roast pork!". Then she bit of her whole finger in one go, the cracking of bone echoing out into the still afternoon. We never found the infant.

The Lord of the Feast is truly a predatory hunter, though it does not kill its prey in the traditional sense. From all reports gathered the feybeast is able to invoke within its prey the following:
The compulsion to act is overwhelming disregarding the notions of family, friendship or even personal safety, and the victim continues to follow this unbidden command until either they expire, or they are removed from the range of the Lord's influence.


We had moved to the high ground to check our position along the trail. The outcropping offered us a view across and down the valley, and for that moment the storm had briefly abated. As we approached the rocky edge, the nauseating scene revealed itself below. Three figures lay in patches of red gore, in stark contrast to the covering of snow around them. Two were already quite dead, and motionless; the third, well, he was sat up, devouring his own arm. It was then we saw it, slowly stepping out from the trees, a lolloping stride covering the ground to the nearest dead man in moments. It sniffed the air, though I have no idea with what as its face, if you could call it that, was a skull of bleached bone. After that, it bent double, its long arms causing it to hunch over the corpse, like a wolf over its kill.
Now I swear the next is true. It started to inhale, the sound of it was enough to make me shudder alone... but then... from the corpse a black wisp appear. I thought it was a trick of the light, but I looked at the others and they all held the same expression as I Horror. The thing continued to inhale, drawing this small cloud towards it, until with feral quickness it snatched it into its jaws, and... swallowed it.
The skull visage bore no trace of skin, nor muscle nor lips.. but I could see that it was satisfied. If but for a moment. 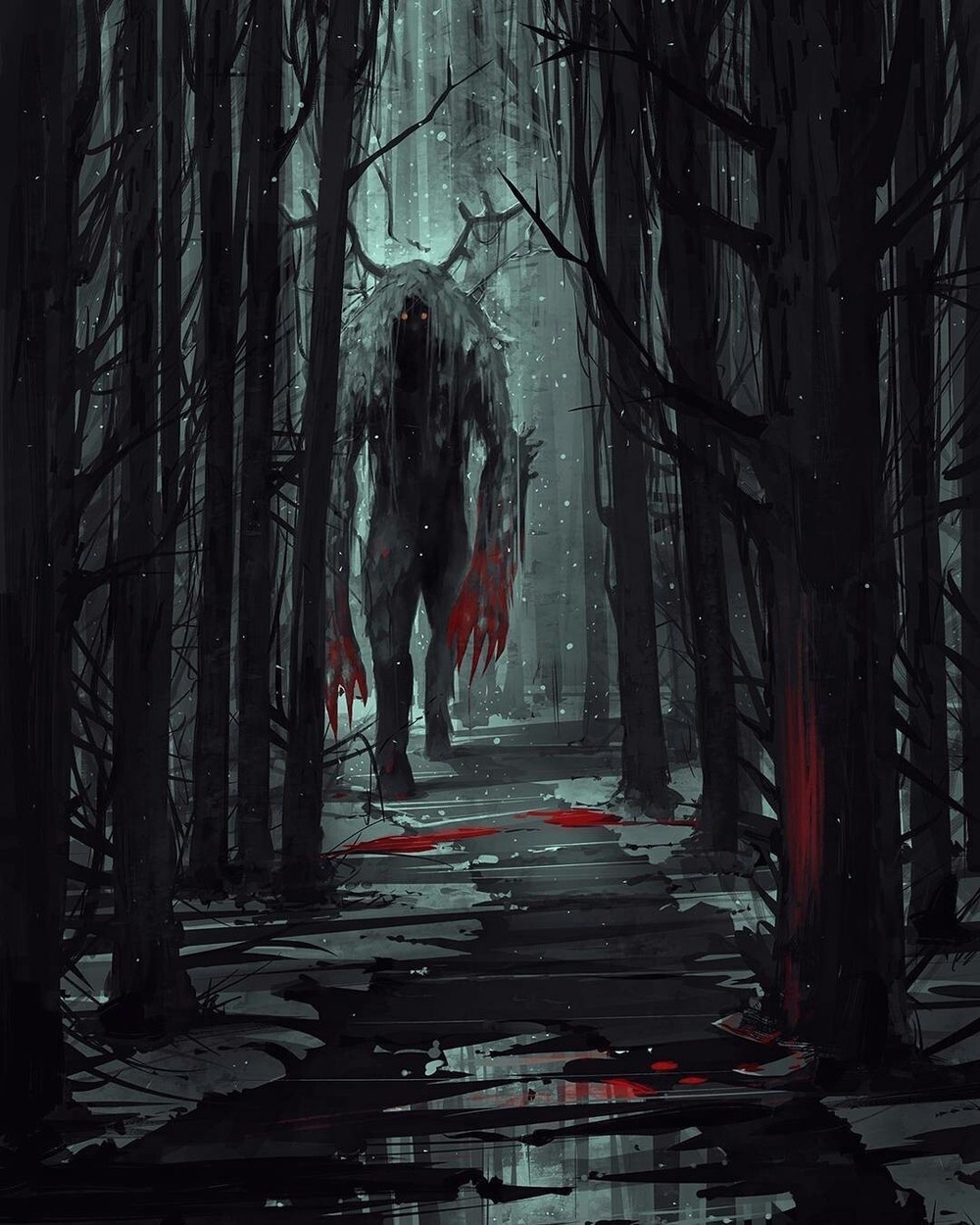