Miinuvian is an language spoken by the Miinu. Because of the limited contact people have with the Miinu people, not much is known about the language.   It's said that those who acquire the Miinuvian Connection automatically learn to speak and write in miinuvian.

Miinuvian as a language is quite similar to English and was likely derived from a version of it spoken before the Miinu existed. It puts emphasis on sharp sounds made with the tongue and teeth, and makes use of a number of different clicking sounds, ones both possible and impossible to be recreated with the human mouth. The impossible sounds are created with the mandibles that rest at the sides of the mouth. 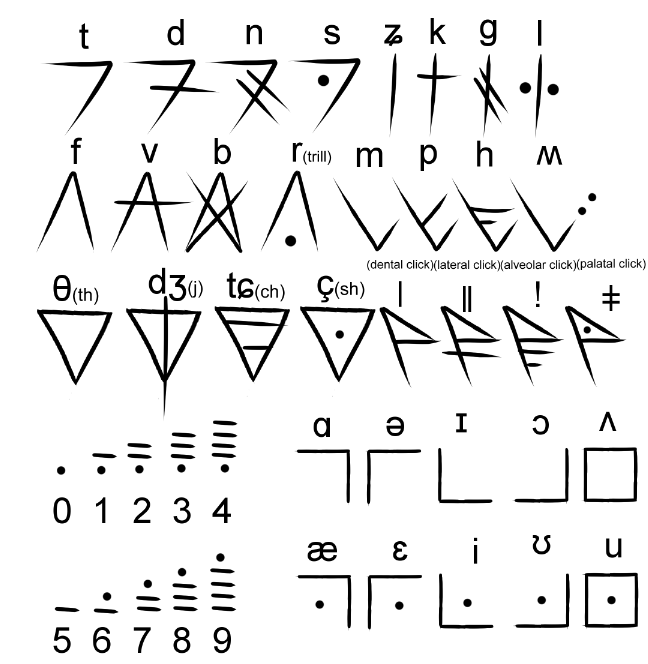 The Miinu have a distinct writing system that has been effected by the materials used to right. In the past, writing was done on pieces of bark or on leaves. Making curved gestures in this format was tedious and difficult, so the Miinu opted for characters that could be written with sharp slash marks and punctures in the parchment.   Even though the Miinu have since invented forms of ink brushes, they still use this style of characters to this day. All the characters in miinuvian are sharm, using triangles, straight lines and dots. Consonants are groups up by fours based on similar base shape. The secondary shapes usually consist of plain, one line, double line, and a dot or more dots.   There are ten vowel characters that appear as different corners of a square, with the last one being a full square. There are two sets of five that are nearly identical, except the second set have dots in the center.   Their number system is a strange one involving stacks of dots and lines.
Spoken By
Miinu

Common Idioms and Figures of Speech
"Hatched from the wrong egg"
A Miinu that acts a bit differently than it's family.
"A mouth were your tail is"
Being rude, vulgar or confrontational. 'Talking Shit.'
"Quivering under a leaf"
Hiding from responsibilities or confrontation.
"Mustard Faced"
A Miinu blushing, referencing their yellow blood.
"A little carpenter ant"
A young miinu with a talent for building or construction.
"Stay in your hole"
Basically 'Stay in your comfort zone. Don't takes risks'
"Weak-winged"
Unathletic, unskilled.
"Slapping the Wasp Queen"
Doing something incredbly stupid / Dangerous with immediate consequences.
"Tail Dancing"
Flirting or acting in a flirtatious manner.

This article was made for Summer Camp 2019 for the prompt:

" Describe some common idioms and sayings from a culture in your world."

It has since been moved from Kollark to it's own setting.
Please Login in order to comment!