The water always finds its path; and where there is no path to be found, it forges one.

Banner Credit: Heibe
The Galantasa is the northern kingdom of the Allentrian Empire. Its human inhabitants are watermagic wielders. It is also home to the Allentrian sprite queendom.   Off the coast in the northern waters is the largest saltwater nereid population in the western hemisphere. Though freshwater nereids do reside throughout the state, they are distrustful and resentful of humans, and have therefore elected not to become an officially recognized Allentrian race. They do not pay taxes, nor do they have representation in the Council of Nine.   Inhabitants of the Smarlands are referred to as Galantrians.

The Galantasa is home to the empire's largest source of fresh water: The Galantrian Lake. Two major tributaries spring from the lake, transecting the continent. These are the East Outlet River, part of which is diverted to serve the capital city of Noryk, and whose main branch flows through the Smarlands; and the West Outlet River, whose bain branch flows through the Erastate.   The Galantasa is also home to a massive, mountainous rainforest. These mountains are rich in precious metals, and as such a large mining trade has sprung up in the north. Smarlindian dwarves have expanded into the northwest to capitalize on mining opportunities, and, working together with Galantrian miners, traders, and smiths, they have created a booming industry. Galantrian iron is prized for its ability to receive magical enchantments, and all top-tier iron derivative products come from the Galantasa.   In the northeast, the land rises steeply in elevation, sloping up to meet the base of Shivnath's Mountains, which mark the territorial boundary between the Galantasa and the Smarlands. The land is striated in tiers here, and sunken forests abound, the trees often drowning in the extended, year-long icemelt from the mountains. Ice mangroves have flourished in recent times, mostly thanks to the magical attentions of the sprites.   In the southern part of the state the land is mostly flat and boggy. Doryn Fen is home to many unique plants and animals, and is the largest marsh area in the empire. The fen acts as a natural bulwark from the mountain melts, and thus protects Noryk (further south) from flooding in the springtime.

The main exports of the Galantasa are varied. It is the number one provider of fresh water, but most of the water flows through and from the state naturally, and thus is not considered a trading commodity. Ranked by thousands of tonnes, the top ten Galantrian exports are:
Iron
Fish
Rice
Carbon
Steel
Icewood
Ice
Pressurized Steam
Liquid Nitrogen
Tea 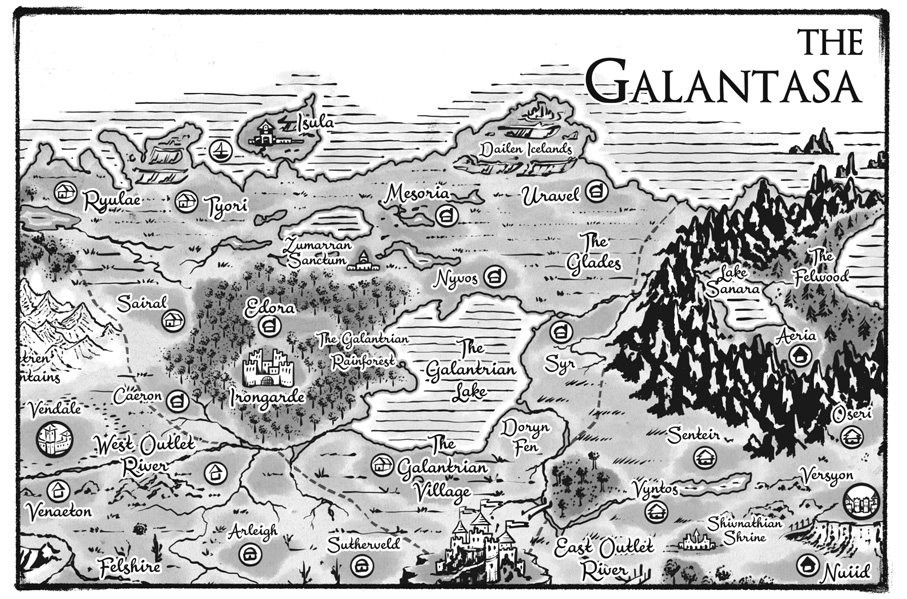