United by Magic, Bound by Light; Fight evil with Justice, Keep Faith through Might.

Banner Credit: ShivnathProductions & atelierMUSE
Allentria is an empire comprised of four kingdoms which operate under common imperial law. These kingdoms are the Smarlands to the east; the Galantasa to the north; the Erastate to the west; and the Fironem to the south.   While the kingdoms have their own monarchs who each govern their individual states, all four states are beholden to the Imperial Government, helmed by Empress Aldelphia.

At the seat of power in the Allentrian Government is the Empress. She presides over the Council of Nine, where each of the nine wielding races of Allentria have a representative to speak and vote for them. She also acts as the Premiere of the Union of the States, an organization comprised of representatives from each major mortal metropolis.   Directly beneath the Empress in terms of power are the four human kings who govern their own states.

The Smarlands is the eastern kingdom, and is home to the empire's earthmagic wielders. It is protected by Shivnath, god and guardian of earthmagic, who has the form of a mighty emerald dragon. The Smarlands is renowned for its natural beauty. Its sprawling golden meadows and its massive ancient forests are impressive, but its most notable feature is Shivnath's Mountains, an extensive range spanning the northeastern border of the kingdom. The tallest of these peaks, Argos Moor, is taller even than our world's Mount Everest.   The northern kingdom of Allentria is the Galantasa. It is home to the empire's water wielders, and is guarded by Zumarra, serpent-god and guardian of watermagic. The Galantasa boasts the largest freshwater lake in Allentria, and its two major tributaries transect the continent and provide water to many communities along the way, including the capital city, Noryk.   The western kingdom of Allentria is the Erastate, where native air wielders dwell. It is guarded by Naero, gryphon-god and guardian of air magic. The Erastate is the lowest kingdom in terms of overall elevation, and is relatively flat. This, plus fertile lands in the north that are watered by icemelt from Galantrian mountain ranges, makes it ideal for animal husbandry practices.   The southern kingdom of Allentria is the Fironem, where live the empire's fire wielders. Valaan, phoenix-god and guardian of firemagic, is the protector of this proud kingdom. Though the Fironem sports vast deserts and a dangerous range of temperamental volcanoes, it also has some of the most beautiful tropical forests and sand beaches in Allentria, and is a principal exporter of many minerals and spices.

The Empire of Allentria is comprised of four kingdoms, united by proximity on the island continent and unified under one government in the Third Age.   Each of these territories remains autonomous, with their respective monarchs dictating certain laws and regulations for their citizenry, but together the four kingdoms also are subject to the laws of the Imperial Government.

Each kingdom has its own army and militia, but the Imperial Guard is the top-tier military organization in the empire. Only Tier Seven wielders or higher are allowed to enlist in the Imperial Guard, which has jurisdiction and authority throughout each of the four states.

Although Allentrian society is scientifically advanced, and understands magic on a molecular level, the technology does not reflect their level of learning. This is because most Allentrian technology is magic-based, or magic-reliant. Since everyone can wield magic, and it is so highly integrated into daily life and work, it is much more common for people to rely on their wielding abilities than on technology.   This means that Allentrian technological advancement has actually been stunted because of their magical abilities. However, as the population grows and advancements continue to be made in science and enchantments alike, more and more self-sustaining machines -- e.g., vehicles that run on steam, coal, oil, or electricity -- are being developed. The integration of science-based machinery (as opposed to magically enchanted items/machines) has allowed those of lesser power and/or lesser incomes to have access to technology that once would have been beyond their reach.   For a comparison, consider Allentria to be on the verge of an industrial revolution. They are just now beginning to develop mechanized guns, coal-powered tanks, and make use of electricity as a renewable resource.

Though there is no official state religion, there are four religious organizations:
The Shivnathian Sect
The Zumarran Sect
The Naeran Sect
The Valaani Sect
Individuals from each state tend to pay homage to their own god and guardian. Thus, Smarlindians tend to worship Shivnath; Galantrians worship Zumarra; Erastatians worship Naero; and Fironians worship Valaan. Each god is recognized and balanced in power, and it is not uncommon for people to worship several or all the guardian beasts of Allentria.

As of the Twelfth Age, Allentria has no foreign relations.   Beginning in the Second Age, and continuing to present day, Allentrians cannot leave their shores by way of the ocean. Every time ships sail for foreign lands, they meet with mysterious, often tragic ends. No Allentrian ship has ever made a successful sea crossing -- not even to their nearest neighbor, Calza, located only five-hundred miles to the west. Thus, Allentrian ships are believed to be cursed, and there are none now brave or stupid enough to attempt the crossing.   In the Eighth Age, following the events of Belial's War, Allentria cut all ties with its former foreign allies. It closed its doors to immigration and trade, and the Imperial Guard was founded, employing only elite, high-Tier wielders to guard its ports and prevent any foreigners from entering. Thus, there are now to imports or exports. Allentria is isolated and self-sufficient, and although illegal trade still occurs, the last official foreign relations it had with foreign powers were approximately two-thousand years ago.

Although trade with foreign nations ceased during the Eighth Age, interstate trade thrives to this day. Because Allentria is comprised of humans who can wield every type of base magic, it is able to be self-sufficient, with each individual state providing vital commodities for the others.   Goods are often moved between states via large transport trains. River trade is also popular, since most merchant cities can be reached by inland water.

Wealthy and middle class Allentrians all have access to basic public education, though wealthier families may elect to send their children to private schools in the cities, or enlist personal tutors.   Children are educated in general subjects, such as reading, writing, history, mathematics, and science; however, they are also schooled in wielding, and after twelve years of basic education they can opt to attend specialized wielding institutions. This is not necessary for survival, but for children who plan to pursue a magic-based career, it is highly recommended.

All Allentrian cities have excellent sewage and septic systems. Aqueducts and watersheds in the Galantasa flow south and service most major metropolises. A series of well-maintained highways connects all parts of Allentria. There are Imperial Highways, which are guarded, serviced, and maintained by the Empire, and there are state roads which are maintained by each individual kingdom.   Heating and plumping is commonplace -- moreso in the wealthier areas of the Empire, but not at all uncommon for middle- and low-income areas -- and though electricity is primarily obtained through natural or magical means, it is used by the wealthy and the powerful as an additional luxury. 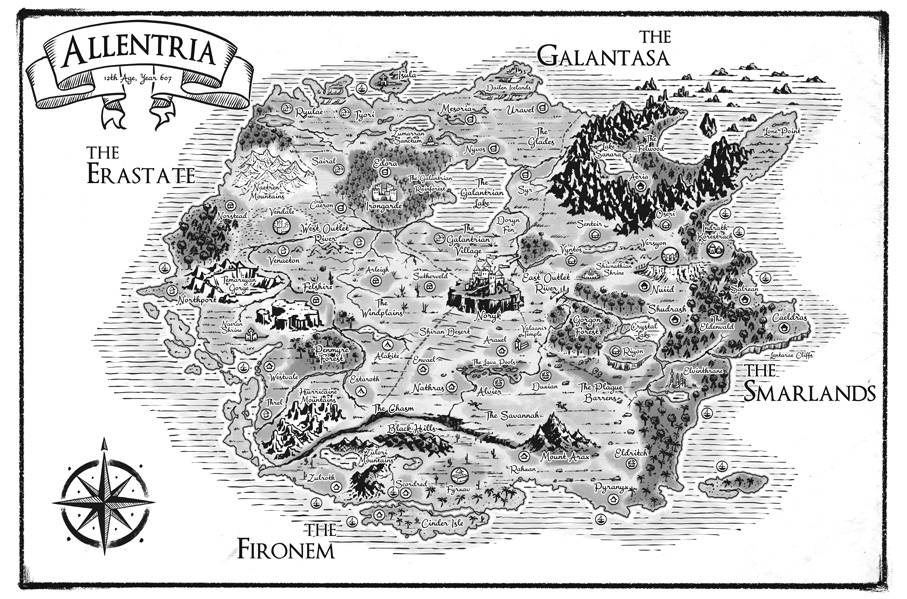