Nomtai sits in an interesting geographical space, it is a hard land of either blistering heat or icy cold on the edges of the north. They lie on the outskirts of Namarie and close to Peridot, as a result of this they have fostered a strong reputation with them and a regular trade branch to the point that their economy is almost built entirely around and for Peridot... a shame as they are in reality an exceptionallly skilled blacksmithing community and mining space with their mountains and mine cities being legendary across Namarie as a space of culture and brilliance.   Though, Nomtai owes their skill and mining ability to their oldest residents, the creatures of Ord. Giants... specifically the king of Storms Wufgrand the Storm Giant. They taught the people of Nomtai to use runes of the Ordening on materials of battle and beauty, they taught them to smith and to mine and to treat metals and minerals with both strength and grace and they taught the natives of Nomtai to build a life from that... then they returned to their mountains and their skies. There are rumours that the most talented and prodigious of smiths are gifted divine inspiration on occassion by the creatures of Ord themselves as a way of learning and ensuring the Nomtai culture survives.   Since that day Nomtai has utilised their craft and skill to bring arts and beauty to Namarie with a reputation for possessing the most skilled craftsmen throughout the material plane... enough to even rival Fire Giants. Those who possess the strongest and most potent skill in the forge become known as the 'Ord-Touched'.   However, since the country discovered 'Ruin Ingots' they have become more narrow in their ideals with Peridot pumping gold and resources into the exclusive creation of these ingots... this has led to the Ord-Touched aging with less and less prodigious talent as the land is slowly being drained of its creativity and ambition for art and instead most seek to build as many ruin ingots as possible to continue trade with Peridot and other countries in the area... this change has been so drastic in the last 50 years that Thornden natives may be unaware of Nomtai being any different but the wider world is still puzzling over their change of perspective.

Nomtai is governed by the creatures of Ord and, in their stead, the country became clan and barony based with Ord-Touched taking on apprentices and guards and staying with their wares in the country or travelling to sell them.    Since the deal with Peridot's wealthier businessmen have employed en masse apprentices and guards and established large clans of business of ruin ingots. The Ord-Touched have failed to compete with these resources and so more and more of Peridot's influence has leaked into the country.

Offering art and craft to the rest of the world and working with the Ruin Ingots for a safer Namarie.

Nomtai are wealthy in runic shards as well as gold and silver from business with the other countries. 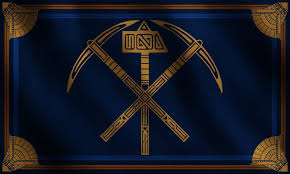 Art is Art/Home of the Crafters