“We think of ourselves as the only ones to conquer this great continent. But there came a people before us…if you just open your eyes to the mysteries of this world, you can see their shadows everywhere.” – Diaries of the Finding by Alis Weatherfield

The people who existed on the continent before the modern era are quite the mystery. Scholars refer to this time as the Tribal Period. Many non-scholars think their existence is a myth. Among the religiously minded, these pre-modern peoples are more colloquially known as the Old Gods as texts from both Star Sign and Sacred Flower refer to the continent as the home of Gods before it was the home of man. And while academic work, especially out of the University of Gardinya Lyra, points to their very real existence and the possibility that they were a much more advanced, magic-using civilization, the research has been pretty much ignored in favor of the more colorful myths.   Below is a summation of current academic research on the pre-modern peoples. 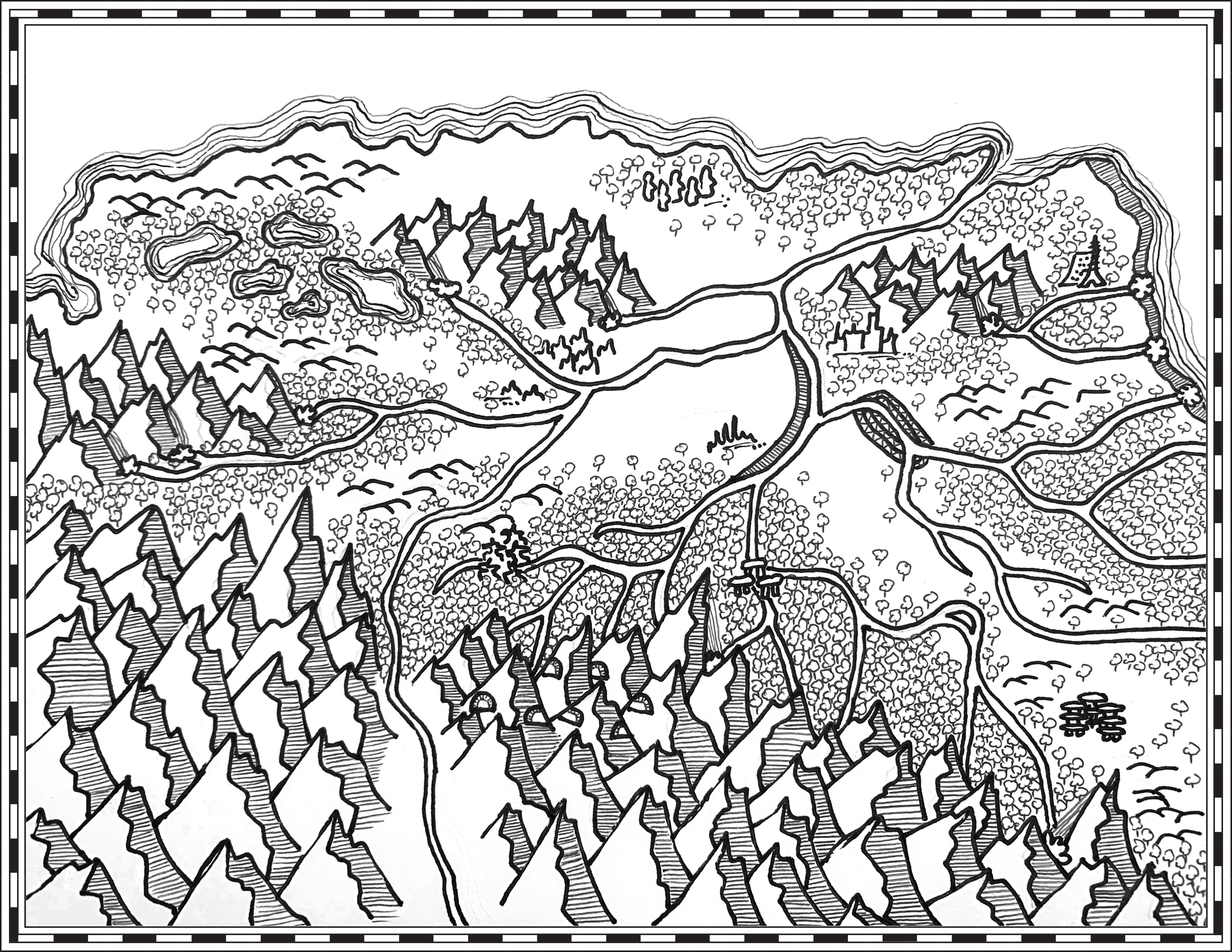 The Tribal Period designation was given to this pre-modern period because of the abundance of references to a person’s particular tribe. People in this era lived in settlements, both large and small, referred to as a tribe, which were headed up by a Tribe-General. These singular tribes banded together geographically, having expanded over the years from their original tribal settlement, to form a conglomeration of formal Tribes, headed up by a War-King. People in this era identified more with their region's Tribes and looked up to their War-Kings than they did to their settlement tribe and Tribe-Generals. There are four Tribes that we have evidence of.

The people of the Tribes period were monument builders. Monuments litter the areas they settled – and surprisingly, some areas that seem to have been nowhere near their settlements (see the Stone Gods Heads of the Umbragelb Desert or the Three Standing Towers in the middle of an empty plain in the Winter Kingdom). There did not seem to be a battle that the River Tribes did not build a monument to (see the Tower in the middle of the Salt Flatts or the hundreds of pink marble obelisks that dot the Day Kingdom, all carved in a language of curving and interlocking letters we can’t read). The Plains Tribes seem to have contained their monument building to their two major city, with almost every surface of the Stone and Ruins City and the Half-Pyramid City covered in brilliant displays or artwork and civil engineering.   They seem to be using a form of architecture that is lost to modern peoples, especially seen in their techniques of intricate stone carving and construction concrete inlaid with shares of precious stone and glass. The Mountains Tribes use of aquifers and sewer systems built into the mountains themselves is a building technique that is above our modern people.

While the Tribes had a pictogram-based written language, they seem to be much fonder of using art to document events. The cave paintings of the Great Mountains seem to tell the entire history of the Mountains Tribe (if read from west to east, starting from the Tannengrau Pass to Goddess Waterfall Point). These drawings are detailed enough to show a mastery of both realism and two-point perspective. A scene in Cave 12 shows the coronation of War-King Visgilk where every onlooker witnessing the glorious scene is unique. It is curious how realistic these cave paintings are, that they also brightly colored dragons and monsters that we have no name for mixed in with what we can assume are very real battles.   The Plains Tribes also loved their murals, although, with few mountains to record on, save the Deep Canyons and Salt Cliffs which seem to be passed between them, and the River Tribes, the Plains Tribes covered their buildings with murals of everyday life. We have found evidence that when a home was either passed to a new generation/family, the walls were re-plastered over and new murals were started. Some of the more intact homes in the City of Stone and Ruin have 20-deep layers of this drawn plaster that are currently being carefully excavated to preserve as much of this rich history as possible.   The River Tribes seem to have been especially fond of carving detailed relieves of their accomplishments of out stone tablets, and then casting a relief of that tablet out of concrete. These reliefs seem to have been mass produced and described all over their territory to spread the War-King’s greatness. They must have been a particularly warlike tribe for how often they depict battle and combat scenes in their homes and public buildings. We have found over 400 intact copies of the Battle of Cedar Hill stone carving found in excavated River Tribes settlements (the perfectly preserved original still stands in the main room of the Sixth Temple.

It was the SignSign creation myth that decried “before our peoples inhabited this continent, the world was the home of the gods, and only when they were extinct were we born from their ashes”. The origins of this creation myth are fuzzy, but perhaps it was all the monuments left behind from the Tribal Period– architecture so strange and advanced that people could only imagine it was built by gods – that pushed them to this exalted thought. And even as we have more and more scientific evidence that this is not true, our origin from the Old Gods before us has become so ingrained in religion and society that Old God purists are the norm. Quite frankly, it has hampered many attempts to learn more about this period, with every new discovery being declared sacrilegious by the church.

The Tribal Period seems to be a time of unmatched and unpredictable ecological activity. Global temperatures fluctuated in ways that would make growing patterns hard to maintain between generations. Great droughts lasting years would be followed by rainy seasons that would flood low-lying areas. There are signs of massive volcanic eruptions along the Dead Obsidian Mountains. If the Tribes were not at war with each other, they seemed to be at the world with the world around them.   These crazy weather conditions left a permanent scar on the landscape that can still be seen today. There is evidence that the Bramblewood was once an area of many lakes, the Coral Woods were once completely underwater, an earthquake may have created the Gebrannt River Canyons, and most odd, the Elfenbein Salt Flatts was once the most fertile and desirous land on the continent.

The Tower of Collette

Built by the Plains Tribes in 219, in what is known as the Half Pyramid City. Notable for being the tallest of the surviving monuments from this period. The base of the tower contains a ring of sold gold in which the names of the Plains Tribes’ Gods of Fate, Love, Beauty, and Wisdom as engraved. It is topped by a gold statue of the fated lover Collette, pictured jumping to her death.

The Mountains Tribes carved the Goddess into the mountainside at the point’s waterfall, completed in 671. There has been debates over which goddess this is supposed to represent, with many scholars thinking it is the Plains goddess of Wisdom, Pella (because of the laurel crown she is holding) and others noting that the outstretched hand of the statue is only seen in Arila, Mountain Water Goddess carvings

Notable for his building of the Seventh Temple and his Rebuilding Towards Greatness Program, which while replenishing the army’s manpower and Tribes' coffers after the Great Drought, can be pointed to as the start of the downfall of the River Tribe.

Notable for brokering the 50-year Grey Peace, a period of time where all four Tribes experienced prosperity and growth. Anaeth was hailed as the Golden Queen by her people for bringing this about.

Notable for both instigating and winning the Border War with the Plains Tribes, breaking the Grey Peace. Remembered by his people as their most ruthless leader.

High-General Telvall of the Mountains Tribe

Notable Mountain Tribes General who won many battles for his War-King, until he was selected to lead the split of the tribes, becoming the first War-King of the Plains Tribe.

I love the way you formatted the section detailing the individual tribes! With the little sketches, too. Lots of great stuff in this article!