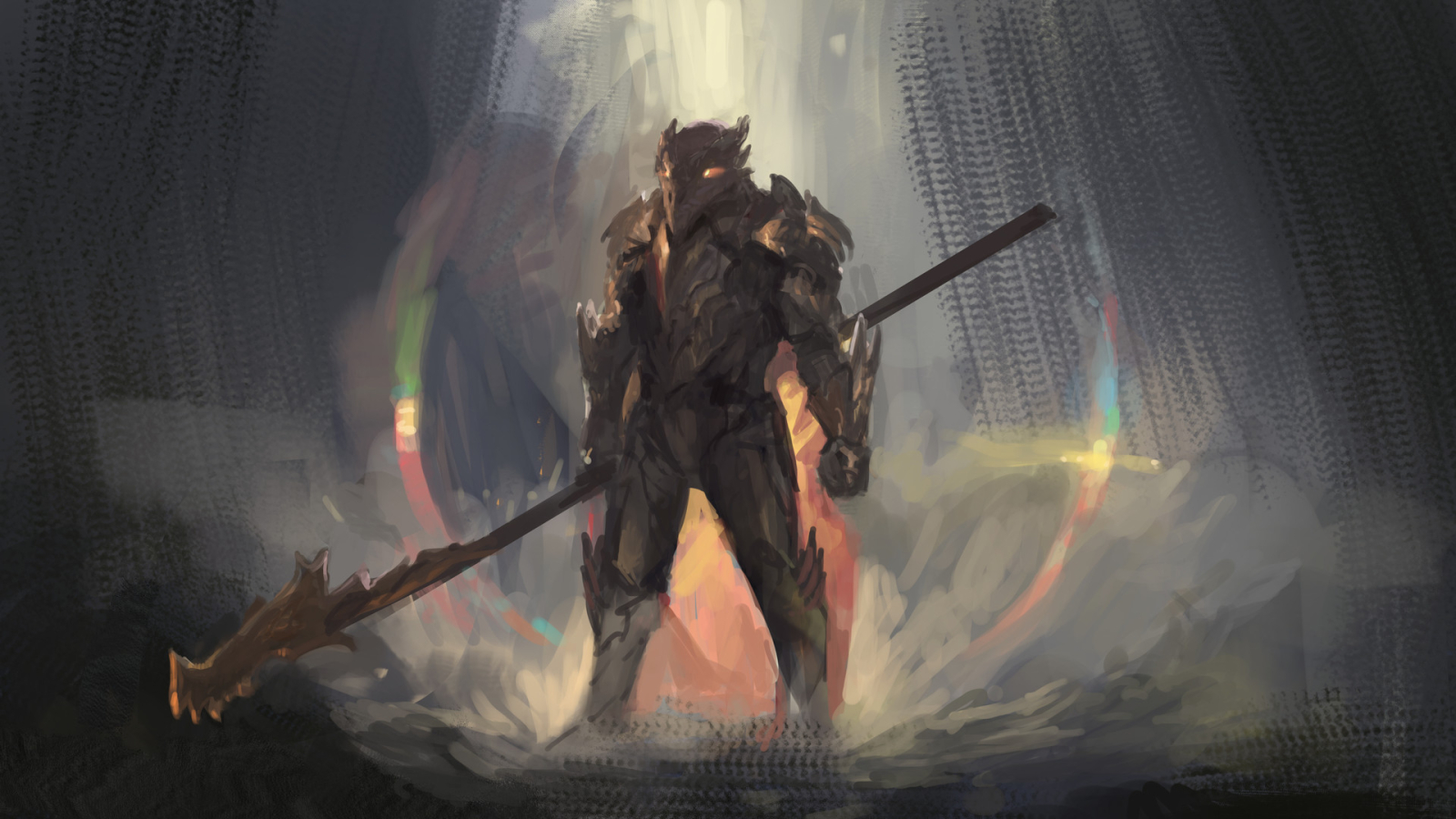 Article by Shpjokk.
Born of dragons, as their name proclaims, the dragonborn walk proudly through a world that greets them with fearful incomprehension. Shaped by draconic gods or the dragons themselves, dragonborn originally hatched from dragon eggs as a unique race, combining the best attributes of dragons and humanoids. Some dragonborn are faithful servants to true dragons, others form the ranks of soldiers in great wars, and still others find themselves adrift, with no clear calling in life.
To any dragonborn, the clan is more important than life itself. Dragonborn owe their devotion and respect to their clan above all else, even the gods. Each dragonborn’s conduct reflects on the honor of his or her clan, and bringing dishonor to the clan can result in expulsion and exile. Each dragonborn knows his or her station and duties within the clan, and honor demands maintaining the bounds of that position.
A continual drive for self-improvement reflects the self-sufficiency of the race as a whole. Dragonborn value skill and excellence in all endeavors. They hate to fail, and they push themselves to extreme efforts before they give up on something. A dragonborn holds mastery of a particular skill as a lifetime goal. Members of other races who share the same commitment find it easy to earn the respect of a dragonborn. Though all dragonborn strive to be self-sufficient, they recognize that help is sometimes needed in difficult situations. But the best source for such help is the clan, and when a clan needs help, it turns to another dragonborn clan before seeking aid from other races—or even from the gods.

Dragonborn are bipedal creatures, and look very much like if a dragon and a human had a baby (A theory that still has some fervent researchers).
Dragonborn look very much like dragons standing erect in humanoid form, though they lack wings or a tail. The first dragonborn had scales of vibrant hues matching the colors of their dragon kin, but generations of interbreeding have created a more uniform appearance. Their small, fine scales are usually brass or bronze in color, sometimes ranging to scarlet, rust, gold, or copper-green. They are tall and strongly built, often standing close to 6½ feet tall and weighing 300 pounds or more. Their hands and feet are strong, talonlike claws with three fingers and a thumb on each hand.
The blood of a particular type of dragon runs very strong through some dragonborn clans. These dragonborn often boast scales that more closely match those of their dragon ancestor—bright red, green, blue, or white, lustrous black, or gleaming metallic gold, silver, brass, copper, or bronze.

Dragonborn are easily likened bipedal dragons. They require more proteins than a regular human for their daily food intake, but otherwise work largely the same as a human, biologically. They are even able to have intercourse together with humans.
When a dragonborn dies, its body undergoes a very strange transformation. In the case of all dragonborn, their bodies will harden and turn to the metal which their scales represent. For example, a silver dragonborn's corpse will harden and turn into silver, while a red dragonborn would turn into a ruby statue, and a white dragonborn would become diamonds.
Many, many different theories exist as to why this happens, but none have managed to produce a solid theory.

A Dragonborn reaches adulthood at the age of sixteen and dies around the age of 90.

Dragonborn are centered in Sanctuary, their main capital perfectly in the middle of the valley. Dragonborn travelers, church ambassadors and peacekeeper enforcers are quite normal, however

Dragonborn are sapient, with an average sapient intelligence.

Dragonborn often are born with inherent magic, and finding dragonborn sorcerers is not unusual.

The largest known force of Dragonborn is based in Sanctuary. Though some act more independently, ultimately all of them serve their king, Gilgamesh.

Shimmer in scales is often deemed quite a beauty. Because the Dragonborn value strength, a toned body is also seen as something its people strive for.

The Dragonborn are always looking for strength, physical more so than magical. They prefer work performed by one's own two hands, and many feel taht magic is cheating.

Displays of power are often quite appealing to Dragonborn, and it's not unusual that hunting is the go-to date.

Hunt-mates are often something a Dragonborn looks for, but there are of course outliers. It's not unusual that a Dragonborn looks for a partner that can complement their own work, for example an innkeeper might want an accountant as their partner because they are lacking in that area, or a warrior might be looking for a healer because they are terrible at mending their own wounds.

All dragonborn are taught draconic. Hearing a dragonborn speak the common tongue is not unlike hearing a scandinavian speaking english, though a dragonborn will be rather forceful with their body language, as that is an integral part to draconic.

The Dragonborns' funeral ceremonies always bury the body's remnants in coffins; Burning a body is seen as sacrilege, desecration. In rare cases, the body of a deceased metallic dragonborn is turned into a family heirloom, to watch over their family. This is only done with the blessing of the deceased Dragonborn, and never done otherwise.

Dragonborn dress simplisticly. Extravagant and overexcessiveness is always seen as unnecessary. Often, the price is that their clothes, even the noble clothes, often look a lot less flashy compared to other races, especially next to the extravagant aetherborn. It's not unusual to hear an aetherborn comment on a dragonborn's dress as "dreary", and dragonborn closer to the aetherborn often dress more like them.

The dragonborn are very martial as a people, and in their culture honor, duty and loyalty are highly valued. Each dragonborn is expected to serve at least three years of their life serving the Dragonborn army in some fashion.
They are closely related to Bahamut, and the Church is quite strong in Sanctuary. Sanctuary is known as one of the most harshest and unforgiving climates to live in. To many Dragonborn, this is perfect; A challenge unlike most known ones. Many towers and temples are built by the Dragonborn to reach as close to the thundering storms as possible, and even the largest church in Sanctuary is at the highest top of the capital.

The dragonborn are closely working with aetherborn, kindly sharing the sapce that Sanctuary offers. This betters both species luckily, as they expertly work together in their respective areas of expertise.

To the dragonborn, desecration is of the highest possible offense. Tragically, it's very appealing to plunder dragonborn graves, especially those of metallic ones.

The Dragonborn came to be born as offspring to dragons; How they became humanoids is not known, but it's suspected that the Void Wars warped the eggs of several dragons, morphing them and turning them into Dragonborn.
In older days Dragonborn walked with the Dragons across the globe, but after the death of Bahamut only those under the great Gilgamesh's care survived the Maddening Wave.
Today, the Dragonborn are isolated in Sanctuary; Not to say that they cannot exit Sanctuary, but they prefer to detach themselves from the politics of the other races, the exception being the Church of Bahamut and the Peacekeepers. They maintain a civil relationship with the Church and the Peacekeepers, and several Dragonborn consider it a standard to take a few years enlisted in the Peacekeepers, or servicing under the Church, during their lifetime. 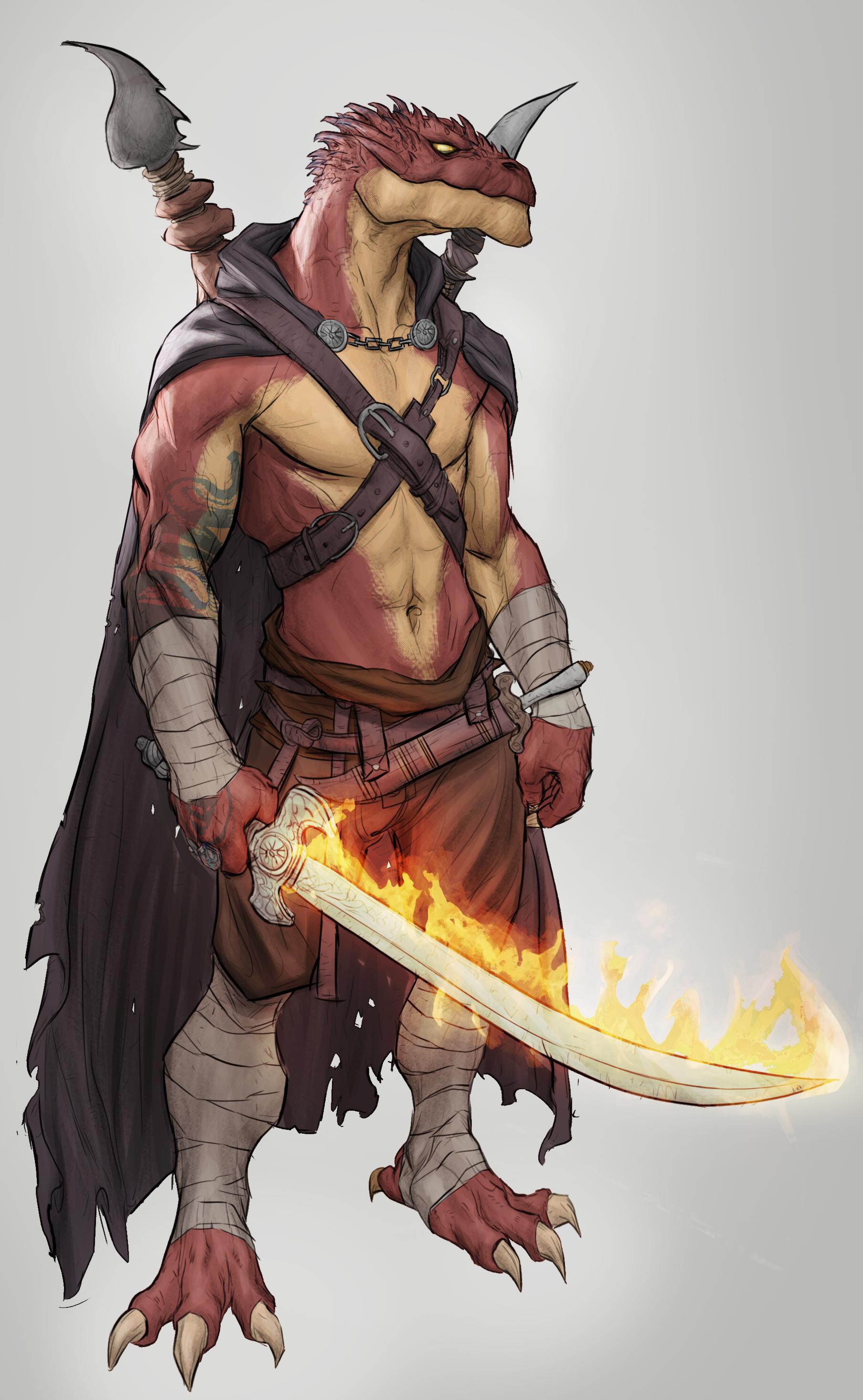 Origin/Ancestry
Draconic, Humanoid
Lifespan
Up to 90 years.
Conservation Status
Dragonborn are fewer in numbers than they once were. That said, they are well protected by their king, Gilgamesh, in their home of Sanctuary.
Average Height
Between 1.7m and 2.2m
Average Weight
Between 90kg and 130kg.
Average Physique
Dragonborn are much more physically built for strength than most, only rivaled by the goliaths and half-orcs. Even a dragonborn born scrawny by their standards would still be considered very muscular by for example human or halfling standards.
Related Ethnicities


Remove these ads. Join the Worldbuilders Guild
Aetherborn
The People of Malkor
Dwarves

Damage Resistance. You have resistance to the damage type associated with your draconic ancestry.
Draconic Ancestry You have draconic ancestry. Choose one type of dragon from the Draconic Ancestry table. Your breath weapon and damage resistance are determined by the dragon type, as shown in the table.
Breath Weapon. You can use your action to exhale destructive energy. Your draconic ancestry determines the size, shape, and damage type of the exhalation. When you use your breath weapon, each creature in the area of the exhalation must make a saving throw, the type of which is determined by your draconic ancestry.
The DC for this saving throw equals 8 + your Constitution modifier + your proficiency bonus. A creature takes 2d6 damage on a failed save, and half as much damage on a successful one. The damage increases to 3d6 at 6th level, 4d6 at 11th level, and 5d6 at 16th level.
After you use your breath weapon, you can’t use it again until you complete a short or long rest.

Languages. You can speak, read, and write Common and Draconic.