In a typical gaming session (3+ hours), each character will receive around 5 XP, modified by a number of factors including: the difficulty of encounters (tactical / social / psychological), character immersion, accomplishments / milestones, etc.

The GM will usually reward a Tick per game session amongst Attributes or Skills they have been using. The first Tick in a stat gives a 1 XP cost discount to improving it and further Ticks help to reduce the time needed to train the Attribute or Skill by showing that the character has been regularly using it. The time required to learn or improve an Attribute or Skill (see table below) is divided by the number of Ticks on it.

To increase an Attribute (up to but not exceeding the character’s racial maximum), spend XP equal to: 5 x . So advancing from Body 3 to Body 4 would cost 20 XP.

The same as with improving Attributes, the cost to increase an Active Skill is 5 x . Reaching 1 rank in an unlearned Active Skill costs 5 XP.

There are three levels of Knowledge Skills (see page 23 for full details). Basic (2 XP) gives a +0 die bonus, but allows the character to make checks with the appropriate Linked Attribute (Logic or Intuition). Minor costs another 2 XP to reach and gives a +2 die bonus. Major costs a final 2 XP and gives a +5 die bonus. 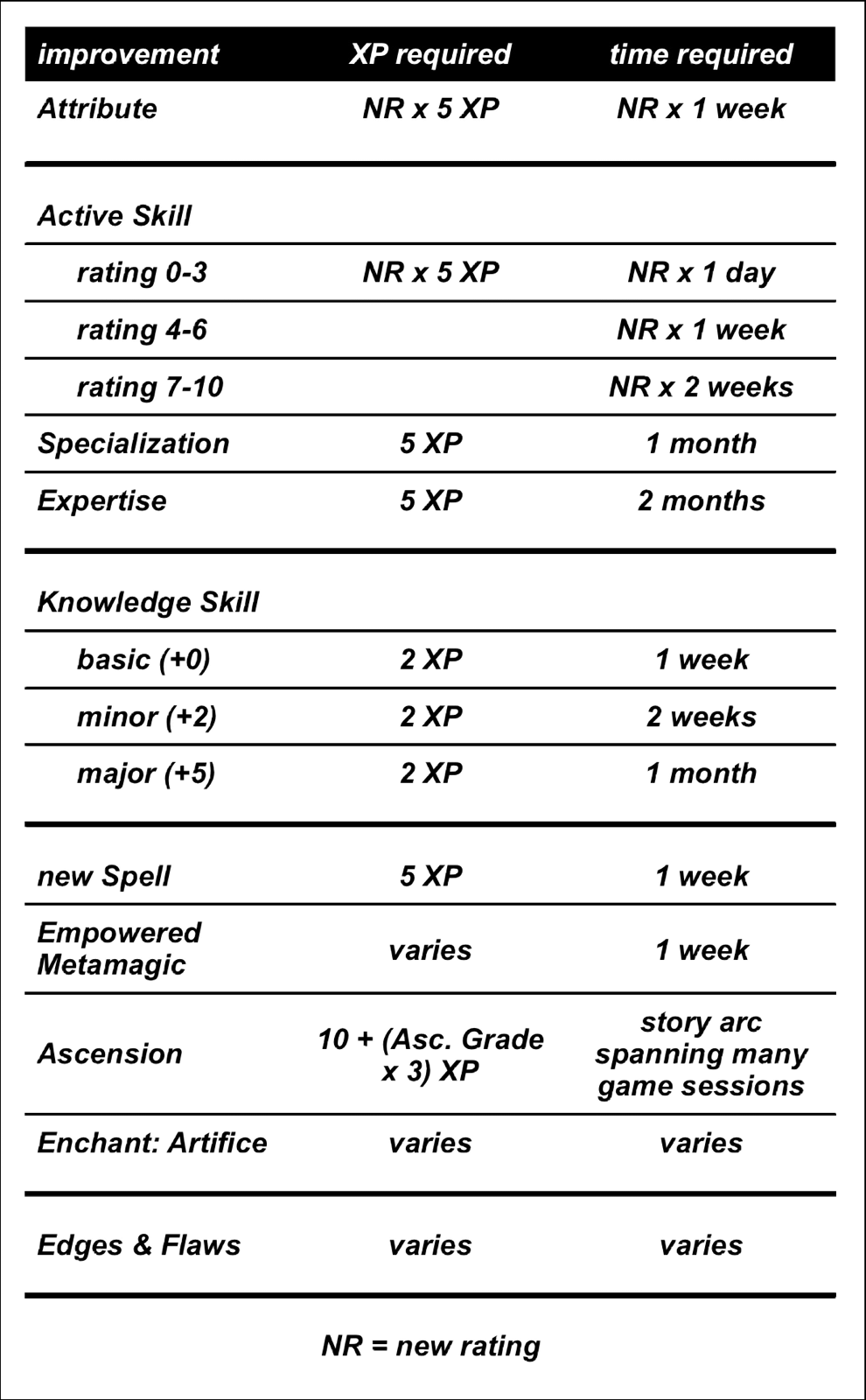 As part of the character creation process, you may spend XP to buy Edges or earn XP by taking on Flaws. After chargen is complete, Edges cost double their listed value. Some Flaws can be also overcome with XP & story.

Spells generally cost 5 XP to learn, and while you don’t get Ticks on Spells, knowing other, very closely related Spells will help you to learn new ones, often giving a 1-point XP reduction. Make sure the Spell(s) your character wishes to learn are acceptable for their archetype by checking with the GM. Additionally, your character’s magical tradition may require money and/or time to seek out someone to teach the new Spell, find or write its formula, etc.

While all spells can be interwoven with some Simple Metamagic Effects (SME) which all Mages know (like ‘Subtle Spell’), other, more powerful ones (EMEs) must be purchased with XP. They usually require instruction and significant practice. Costs vary by EMEs — see pages #-# in the Magic Manual for details.

Whereas the Enchant: Alchemy Specialization can be used to make relatively weak, short-lasting magical items, Enchant: Artificing entails the crafting of permanent magic items. One of the final steps in their creation requires the enchanter to spend their own XP to ‘breathe life’ into the item. See pages #-# in the Magic Manual for details.

This is the process by which Mages (characters with a Magic Attribute) can push their maximum Magic above 6 by one point per Ascension Grade (though XP still must be spent to reach the new Magic rating). It is a very involved and costly process detailed on page # of the Magic Manual. The cost to Ascend is 10 + (Ascension Grade x 3) XP.

Remove these ads. Join the Worldbuilders Guild
table of contents