"I have come here, to this city in the Grasslands... It appears like some of the towns and villages close to the mountainside, but that is just an illusion to throw away the foolish. No; this is a City, a place of study of the Higher Mysteries, and a refuge of the Old Lore of the World..." Nael McGinn, Academy Evoker.     Magic seeps the land; according to Myths and tales, it is the stuff that was left from the Rage of the Dragons during Dragonfire the fabled Embers of Magic; others claim that it could simply be a remnant from the forces that created the world before the coming of the Dragons, or even the influence of the Feywild seeping into the world... Either way, the study of the esoteric forces and their control of them have always been a tricky subject: The Grand Academies of old, in what is now The Great Waste, the Mage Towers of the Elves, or even the Academy-sponsored Mage Guilds in the North. But, before then, magic in Human communities was taught in secret societies, small huts in the wilderness, or in solitary towers, away from prying eyes; Even in Axtalan, magic was subject to the Gods themselves, so those versed in the Arts Arcane had to find a secret place to study it.   The Faye-enchantes grasslands of Ikele were ideal to these secretive spellcasters, if they could find a place safe from the predation of beasts, the Wild Hunt of the Fey, and the elements. Eventually, such a place was found in the "heart of the Storm" so to speak, and one by one began to work into what today would be the Great City at the Heart of the Fat Grasslands

The Majority of the population seems to be of Human or Tieflings descent, either coming to the city, or descendants of the original inhabitants. Some Elves -especially those of the Greenborn- live here as envoys of their kin, so there is a fair number of Half-Elves living here.   This is the only place in Karash where Genasi seem to come from, as the city is so steeped in magic, that many people born here are infused with the elements, but some mages have also tampered with the bloodline of certain people, creating artificial genasi of their own, for their own reasons.   While it is known as the City of Spellcasters, the majority of people here have no access to spells on their own.

The city is ran as a Democracy, with a council of mages -each representing several of the schools of magic, as well as a Druid and a Cleric of The Thundering Herd- deciding on the matters of the city.

Besides the obvious illusions, the city's shifting layout, several towers and walls, and the magic users that live in the Free City, Simbaskaal does have its own standing army, an all-genasi militia known as the Contingent of the Four.

Despite the strangeness of the land, the disconcetring perils of the Fae Grasslands, the city is ripe with trade, not just because is the one city in the heart of Ikele that is slightly moored into the Prime Material, but because of the magical artifacts and services that can be procured; those merchants that come here bring food and comforts, in exchange of some spell, or maybe some trinkets of the mages and artificers that dabble in their crafting, but there is another thing that the city offers to those outside of its walls: Gemstones; some as high as a human head, and plenty of gold and silver. It is unknown where this ore comes from: Some whisper that it is a from unknown mines in the regions, and that the mages hire bandits and hags to lure wayward children and drunks so that they can toil in the mines as slaves, others claim that some mages make their way into other planes of existence to get them; and yet, others claim that each mage has sold their soul to demons in order to get it.

The City itself, despite being so suffused in Magic, does that have a series of man-made waterways, sewer systems and the to provide both clean water and waste disposal, and the roads are paved in mortar and stone, but the city layout is maddening for those outside of Simbaskaal, as the roads are winding and sometimes turn to dead ends or alleys.

The City boasts an Arcane Bazaar -unique in the continent- as well as the Library Arcane, the largest non-elven repository of knowledge of all matters of magic, magical phenomena, and the fey, that exists.

The Magical Brotherhoods maintain the Arcane Infrastructure of the City: From the Leylines that feed its defenses, to the Magical Bazaar, to the several services they give to outsiders, and the tutelage of those worthy enough to learn the ways of the Arcane: From Wizards, Warlock Covens, and the Druidic Circles. Such brotherhoods have different names and titles, from the Order of the Ever-Weaving Spider, the Thousand Sisters of the Exquisite Chain, the Brothers of Thunder, the Red Court, and many other smaller arcane brotherhoods maintain order and the flow the Embers of Magic within the City.   Few Religious Organizations have enough presence in The Free City, save some wandering priests of The Old Faith.

The City first started merely as the training ground to one of the older Mage Brotherhoods of the city: The Sun Dancers. These vivacious spellcasters (most of Sorcerous blood, were often exiled for their dangerous spellcasting practices, or abducted by the Highborn Elves to reinforce their Arcane Engines; so in order for them to keep themselves hidden, they founded a small settlement to which to teach and practice their magic.   In time, this settlement attracted more and more spellcasters, and eventually has grown into the city that it stands today. 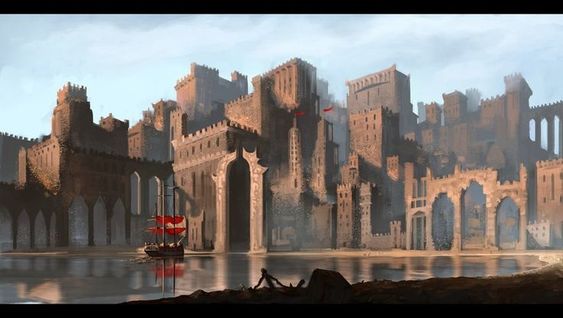 The City itself is built on clay, as many other cities in Ikele: The Unconquered Lands , but with the use or magic and clever engineering skills, such buildings are stronger and more resilient than those made with normal techniques.   The Walls and doors are painted with striking colors: Deep Reds, Oranges, Yellows, Blues and Whites collide with the earthen colors of the mud and clay.

The city itself is surrounded by the infamous Fae Grasslands of the Ikele; such vast steppes are deceiving to those unfamiliar with them, and even those rangers that often travel through them can be surprised by the sudden Fae incursions, or strager phenomena such as time-dilation, illusory grasslands, the stars suddenly changing direction, or the displacement of recognizable landmarks.

All around the city, part of the grasslands have been appeased somehow, and farmers are able to grow crops for the city's inhabitants and for themselves: Grains like oats, barley, and wheat are quite common, and even coffee grains are sometimes harvested from the bushes domesticated some time ago.   That being said, however, Simbaskaal is in the Heart of Ikele, so part of their natural resources is the rare fruits and plants that grow in the Feywild, so those that are brave enough to venture into the paths in between the Grasslands can be rewarded with strange and wonderful fruits such as Aethervines, Cousin's Trumpets, Jennyapples, and Amaranthines.