I am Thelki, King of Kings, behold the Great River of my lands, and drink of its cool waters; behold the great fields of wheat that feed my Empire; behold my armies that make the ground quake as they march, see that my power and glory stretches from the Khanai Mountains to the Gulf of Ahish...Inscription found in a ruin.     When the Elves hear of the Great Waste, many of them say, with a straight face "it was a small price to pay", followed by the scorn of everyone. Many of the The Valley Princes still believe the fact that the elves went as far as destroying and entire region -with no regard of the consequences- is reason enough to maybe declare them Persona Non-Grata. Others view it as the Madness of War, and something to think about when thinking of the Glory of Warfare   Today, the land is barren and dry, the only people living here either live in the borderlands in shantytowns for explorers (last stop before getting into the Wasteland, and first stop after getting back), or the few cities that the same explorers now use as homes.   The Great Waste now has become a repository of knowledge: Knowledge hidden that wants to be found, and knowledge gotten that is being buried there.   There are three cities, however, worthy of mention in this place, that serve as an example of what to find here:

Once, this was a vast and fertile land, full of grassy fields, lush forests bordering the Khanai mountains, and the cities and farmlands were graced with the Great River Mali. The Kanath Empire ruled from here, and slowly expanded southwards, through trade and conquest... But, despite this, the Kanath religion forbade slavery or cruelty towards others, and was inclusive with other peoples, as long as they involved in the life of the Empire. During The War of Winter's Fire, the Khanai were negotiating a non-intervention pact with the Goblinoid Empire, as long as the goblins would leave the Empire alone. The elves, fearing that the Khanai were plotting to join forces or simply give resources to the goblins, decided to use a massive null-life spell on the heart of the Kanath Empire, which caused a blight upon the land that, from years to come, would be known as the The Desolation.     Today, most of the Great Waste is nothing but howling winds and dust, with the ruins of former cities and settlements sprinkled in, waiting for tomb-robbers and adventurers to plumb into the dephts. The majority of the ground is dry and barren, and nothing grows, except on the periphery of the wastes. The little life and inhabitants that live in the Great Waste are foreign to this land, as most humanoid species in the land are adventurers, merchants, scholars, or madmen; life is harsh on the Great Wastes, and both food and water are more valuable than gold.   North of the Great Wastes lies the gulf of Aekeos, in which a small collection of city-states also formed. However, their inhabitants were killed by the goblins, as they had allied themselves with the elves during the war. Today, only the city of of Aealos remains, but it is a shadow of the former Aekean people.   To the East lies the Gulf of Ahish, and the Great Howling Sea. Elven scholars claim that some of the survivors sailed East towards the unknown lands.

As nothing grows here, nothing truly lives here; the rivers have gone dry, plants do not take root, and transplantation of soil, or water into these lands though mundane or magical means may work at first, but then it shrivels and dies. Animals, such as camels, vultures, locusts and other vermin occasionally live in the edges, and the odd wild animal may venture into the wasteland, but eventually -due to the lack of water- they all die.   That being said, there are plenty of treasure hunters, adventurers, bandits, scholars and seekers of arcane lore in the ancient cities and makeshift shantytowns, scratching out a living on searching lost artifacts or trading in with food and water at high prices.

Since nothing grows anymore, there is little reason for anyone else to venture into the badlands, except for hunting treasure... Except for one material.   Deep in the city of Irkala, there are rumors of a strange crystal that grows on the deep burial chambers of the nobility; according to rumor, this crystal is a potent magical focus in itself, as well as an interesting alchemical ingredient. 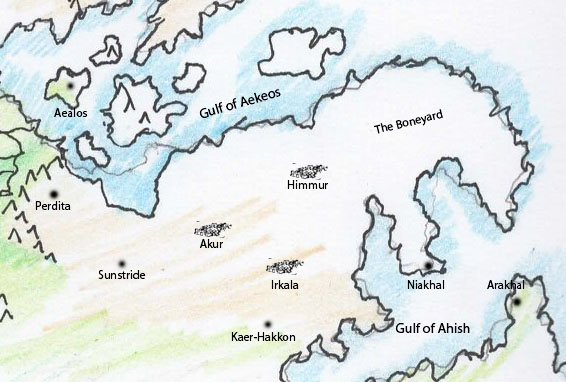