Diana is the daughter of Damien Dal Meara, the Dorion ambassador to Carlissa at the start of the saga. Before the Massacre of Lannamon she lived a largely sheltered life of study and dutiful obedience to her family's expectations. She developed an increasingly blunt, outspoken and fiery personality after her oath to fight the Warlord and his demons.

Profile from the Sanctum of the Archmage adventure games
The daughter of the Dorian ambassador to Carlissa, Diana disowned her family and her homeland when they made peace with the Warlord’s regime. Now the Captain of Robin’s personal guard, she fights tirelessly to help free her adopted country from the Magus’ oppression. 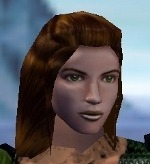