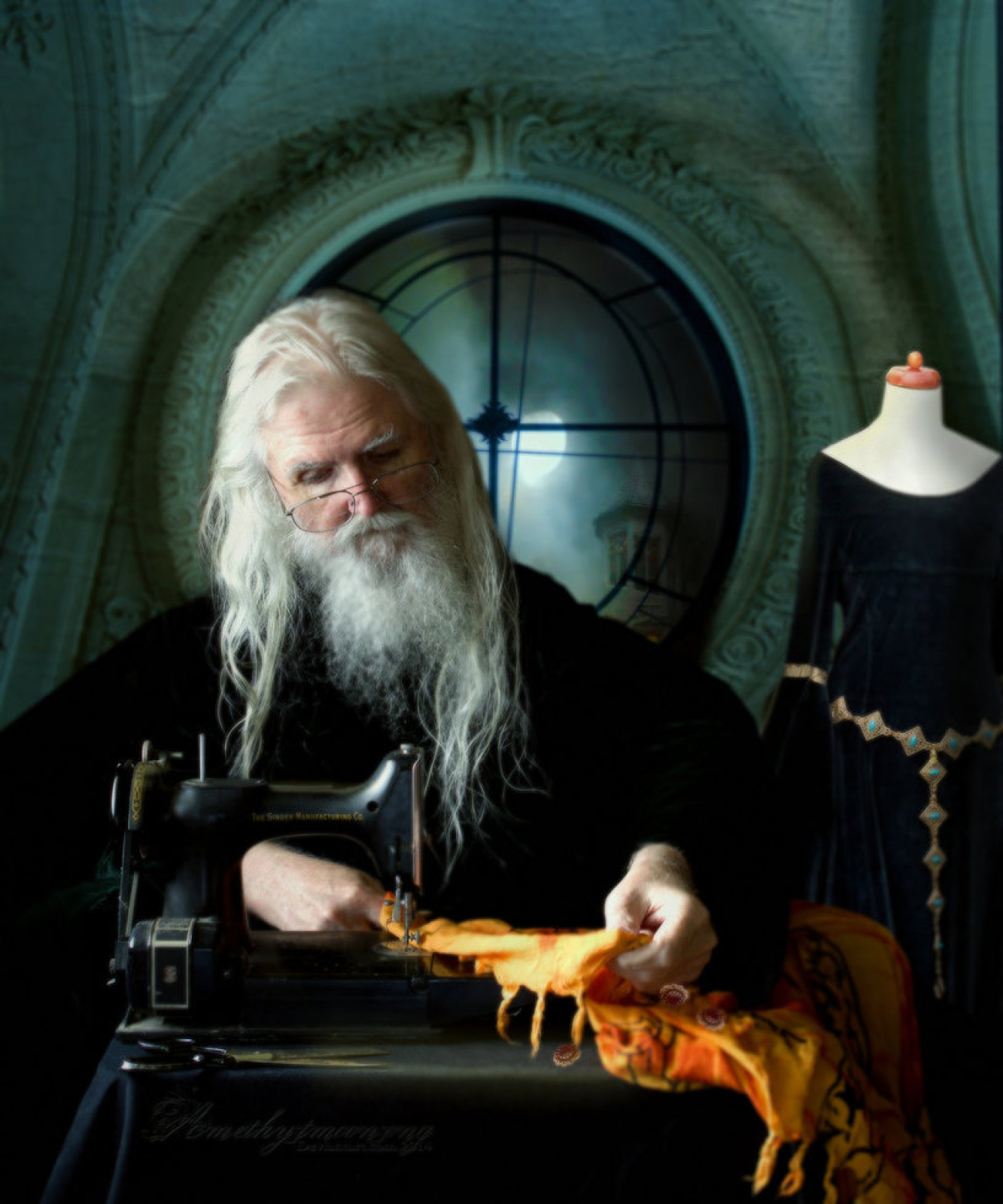 The seamster is a being created from a father with the sorrow brought out upon losing a child. Nightmares from the Dreamscape plague him with grief and twist his mind and body into a disturbing creature of evil into a form they can possess. Once possessed their soul is eaten away until only a husk remains with the nightmare to fill it. These nightmares tend to inhabit certain professions and as a result, they gets its name from the hosts they tend to take over. Tailors, shoemakers, and even doctors are picked by these creatures to inhabit. They are also referred to Child Snatchers, or Daddy Long Fingers due to their appearance and habits. However, the Imperium believes the seamster is a more accurate name.   The following except is from a report provided by the Grinswalk Officials. Their guard captain had been hunting the beast for weeks until finding see came upon it's lair.

When I followed the whistling, I came upon a single skipping child. He was around the age of six, alone on the street in the dead of night. A likely target of the seamster. I kept onward, but quickly realized that the child was also following the same path, to the whistling. When I called out, he ignored my shouts and continued down the road as if under a spell. Knowing the creature's tactics, I followed behind the boy to make sure he was safe.   It was not long before the whistling grew louder till the point of surprise. It was as loud a church bells, yet no one other then this boy could hear it. The boy skipped right up to the door of Doctor Harrison, a well known man known for his kind heart. The Seamster was inside the house of doctor Harrington, that was for sure. After the boy was welcome into the house then the whistling abruptly stopped. I was certain that the seamster was the doctor. Without a warrant, I charged inside to fight the horror in hopes to save the child and avenge the ones lost.
— Lindsey Marigold, Guard Captain of Grinswalk.

The man stands exactly six feet tall, no more, no less. Other then this, the accounts on it's appearance vary due to its unique ability to change it's visible appearance.

when viewed by adults

In the eyes of an adult, one only sees the man that they now inhabit before their body was twisted. In this way, no one knows whether or not he has changed. There are some changes that the adults can see. Their fingers would have grown about an inch to two inches depending on the length of corruption. Their skin may sag slightly, but this could be interpreted as old age. As a result, the magic makes a near perfect disguise.

When viewed by childern

However in the eyes of a child, the man may take a different form. His eyes are made of buttons and his mouth is sewn together as if he were a puppet or toy. The skin is that of soft cloth or fur depending on the form he takes. He can choose whether or not the child sees this form, but will tend to use it far more then not. Sometimes he scent of pastries, strawberries, apples, or candy can be smelled from their bodies as well. This however, is not it's true appearance.

When his magic is dispelled

The creature uses powerful lunar illusion magics to disguise is appearance to all, but a few individuals. A person with powerful solar magics can dispelled this illusion, but only for a short time. He will have very pale and scaly skin and his fingers will be that of needles a foot in length for the delicate work they like to do. Their eyes and mouth are sewn together so that the eyes are not visible. The mouth remains closes even though a children's melody can be hear when he is hunting. The body will appear unkempt and dirty with torn clothes from the original owner of the body. His feet are now at least a foot longer with sharp claws. Any hair that the original owner had will be gone.This is it's actual appearance, but is rarely seen by the living.

A single seamster will live in a large city or travel from town to town to act as a traveling doctor or merchant. They thrive on populated places and rarely live in the wilderness.

They hunt for flesh of the youth and will hunt for children near their homes. With only needing own child per month to survive, they can be patient and wait for the right moment to strike. This is due to their slow metabolism, so a single consumed prey can last for weeks.   However they are very predictable and will use the same tactics in the same order. They will first immerse themselves within the live of their host. As a result, they will go to household members or neighbors to 'remember’ things about themselves. They will try to appear forgetful and sometimes uses a recent loss for this new change. After they received enough information, they will take another month or so to redefine their host to better suit their needs such as taking up a new job or making new friends. Meanwhile they will be feasting on nearby animals until a proper food source can be acquired. After they believe they are safe they will then begin the hunt. Every night they will stroll around whistling a children's melody, however it is more devious then it appears. To adults there is no effect but to children it can be dangerous. The song is actually a spell to whittle down the mind until all they are susceptible to the final song. The song is different and unique to each seamster, but it will sung throughout the city or town for only the child to hear. The child will be drawn to the source like a bear to honey and be taken by the seamster. After this little is known about what happens to the child, but reports believe he skins them and stores them away to eat. This pattern repeats with a new stroll until a child can be hypnotized and taken away.

A woven heart is a valuable commodity among doctors and herbalists for it's healing properties. This heart is made by the nightmare after infecting it's host. Upon killing the creature, one can retrieve the heart inside the corpse. It will appear as a stitched heart made of cloth, but inside, pure death magic, very poisonous to the touch.   The heart itself is used for a variety of things. The cloth shell can be used as a bandage to be used to treat injures and have them healed at quadruple the speed. The magic inside to the majority of people is useless, but powerful wizards and magicians might be bale to use it to enchant demented creatures or craft powerful poisons and potions.

Killing one is difficult since it really only appears to children and they are no match for him once under his spell. Solar magic is required to effectively deal with him. He is a powerful illusionist, so dispelling his tricks is the only way of fighting him on even ground. Once discovered he will fight tooth and nail to live. While not dangerous to a trained soldier, they can still prove difficult if you are caught by surprise. However finding one is even more difficult. Due to it’s seclusive and clever nature, you may never even realize one lives nearby. However take simple lunar magics can deal with this issue. An enchanted item called a Little Listener can detect his final calls he sends out during the end of the hunt. The Little Listener and is put around the ear, however it is normally used to eavesdrop on a conversation, but with simple change, the song can be heard by adults and children alike not under it’s influence.

They are above average sapient intelligence. They follow a very strict routine that they rarely change. As a result they are very predictable until startled.

With the traditional five senses the sapient races have, a seamster has a six sense which has confounded biologists and wizards alike. It's said that it can sense the age on an individual, as a result can detect where he can find children.

Nasty creatures these ones. I had the opportunity of being present during a dissection of this creature. It's belly was filled with the pieces of children and the like. It mouth was that of a snake that could stretch around it's prey. It gives me goosebumps just thinking about it, I hope never to met one.
— Archivist Renna

Lifespan
The lifespan of their host
Average Height
6 ft
Average Weight
120 lbs - 190 lbs
Average Physique
Somehow they are able to increase the strength of the host they inhabit. As a result, they are a lot stronger then they appear.