One of the two venture-captains who founded the Pathfinder lodge in Magnimar, Sheila Heidmarch is a seasoned but now retired adventurer. Sheila and her husband (and lifelong adventuring partner) Canayven Heidmarch acquired their private estate in Magnimar's Naos district after retiring from a life of adventuring. Seeing value in their homeland, Sheila and Canayven have established the first Pathfinder Society lodge in Varisia, granting the Society access to the relatively unexplored wilderness region rich with ancient Thassilonian artifacts ripe for the plunder.

Born the daughter of a Thuvian merchant and a minor Chelish aristocrat of Korvosa, Sheila Astimaris knew from an early age that she was destined to spend her life exploring the wild Varisian frontiers that stretched beyond her city’s walls, so fascinated was she by both the tactics of battle and ancient stories of Varisian legends. When she later met the well-known adventurer and successful Pathfinder Sir Canayven Heidmarch of Magnimar at a ball while visiting her distant kin in Cheliax, she knew she had found her match and lifemate.   Sheila lamented that the Pathfinder Society wasn’t well known in her homeland of Varisia, and soon arranged with her doting father and mother for a visit to Absalom under the pretense of gaining exposure for some of her father’s business interests. Once there, she quickly found her way to the Grand Lodge and secured admission as an initiate, soon receiving her commission as a Pathfinder field agent. She longed to journey back to the trackless reaches of her homeland, but the Pathfinder Society was more focused on central Avistan and Garund at the time, and thus she found her options limited. Not experienced enough to go it alone, she instead joined in with a Pathfinder expedition heading to her father’s native Thuvia. Their adventures eventually took them into the Barrier Wall mountain range, where she encountered an awakened mountain gorilla who became a boon companion to her and her comrades and something of a personal protector to her. He called himself Mandali, and Sheila declared that he must be a prince among his kind for his bravery and wisdom—a declaration that won Mandali’s loyalty more than anything else Sheila had done to that point.   When Sheila learned that Sir Canayven Heidmarch was going to be a part of a Mwangi expedition to the ruins of Jah, she planned her own field assignment accordingly, manipulating her own team to head in that direction as well. Soon enough, her team “accidentally” met up with Sir Canayven’s, and they joined forces to expedite their exploration of the ruins. Though the expedition proved to be only a qualified success, the headstrong and decisive Sheila accomplished her actual mission—catching Sir Canayven’s attention The two grew increasingly close thereafter, and soon departed from their respective teams and began their own missions of exploration and adventure, accompanied only by Sheila’s stalwart ape guardian Mandali. At some point along the way, the two quietly got engaged, and soon thereafter were married. The Heidmarches grew increasingly homesick for their homeland, and increasingly intrigued by the fact that the Pathfinders seemed not to realize the potential Varisia held for exploration. Indeed, it was viewed by most in the society as a backwater wilderness with little to offer but giants and goblins.   Sheila petitioned the Decemvirate to open a Pathfinder lodge in Magnimar, and was soon granted that honor. She and her husband returned to his manor in the city, and Sheila became Varisia’s first venture-captain, immersing herself in all the frontier wonders that had so enthralled her in her youth. Now she is seen as the Society’s steady hand in the North, bringing ever more fresh recruits to her lodge to plumb the secrets of ancient Thassilon. 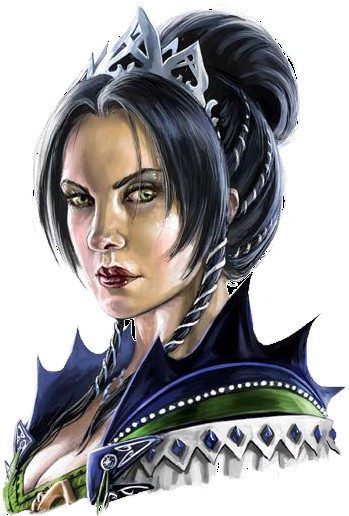