Gamma World    Creatures & Hazards    Biological Life      Carrin
Vast regions fall under the wheeling shadow of the carrins. The croaking voices, majestic rustling feathers and the ghastly ceremonial spears of the “dark emperors” are symbols of terror and subjugation to thousands. In their terrible eyries high above the ground, the carrins watch and scheme. They are mutated vultures, swollen bigger than a human. Their claws are now agile enough to use technology, and the carrins scour the ruins for ancient artefacts and weapons. Re-engineering has made the pinfeathers on their dark wings into stiff, lethally sharp quills. These quills are made even more dangerous by the carrins’ regular poison baths.

A carrin has the bald head and piercing gaze of a vulture. At rest, it is as tall as a person; in flight, its wings stretch out 20 feet or more. Whether flying or standing, it looks alert and malevolent.

All carrins are telepathic. This has given their race a strange unity. Their telepathic links ensure that no carrin will ever willingly kill another. Humiliate, abduct, cripple or exile, perhaps, but death is only meted out to lower (i.e. non-carrin) creatures.   The basic carrin philosophy is that foresight is the highest virtue, a philosophy derived from their vulture progenitors. Just as the vultures scanned the deserts for carrion and prospective carrion, the carrins constantly look for impending problems or opportunities. The first carrin in a nest to identify a crisis — a growing free community, a rogue machine on a rampage, a newly uncovered cache of artifacts — is in charge of dealing with the crisis however that bird sees fit. Success brings renown; failure, or incorrectly identifying a situation, ruins a carrin in the eyes of its fellows. Thus, every carrin is constantly plotting and spying, waiting for the perfect moment to bring some plot or other to the attention of the nest. When the carrin to go to war or to conquer, they never attack directly. Their preferred tactics include manipulated agents, telepathically controlled warbeasts, severed lines of trade and supply, and biological warfare.   Carrins carry short spears decorated with scratched carvings and gobs of gore and bone that signify their current standing in the community. Their telepathically dominated blood bird guardians perch on these swagger-sticks. Every carrin is accompanied by several blood birds, which are mentally manipulated in the egg to be loyal to that particular carrin.

Large numbers of carrins live in the Western Mountains. They do their hunting in the desert and southern plains of Taebur. 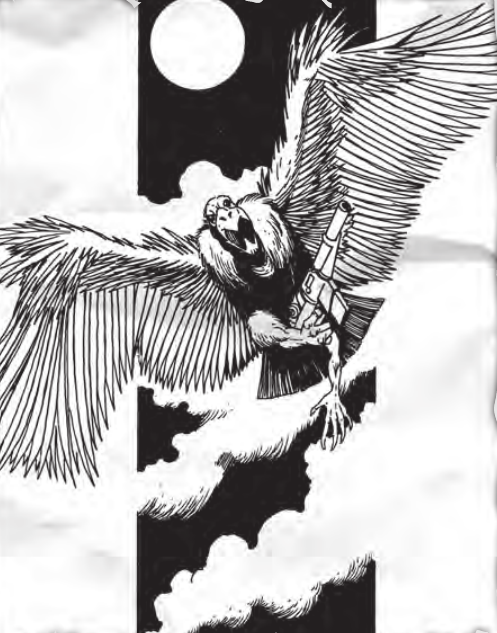