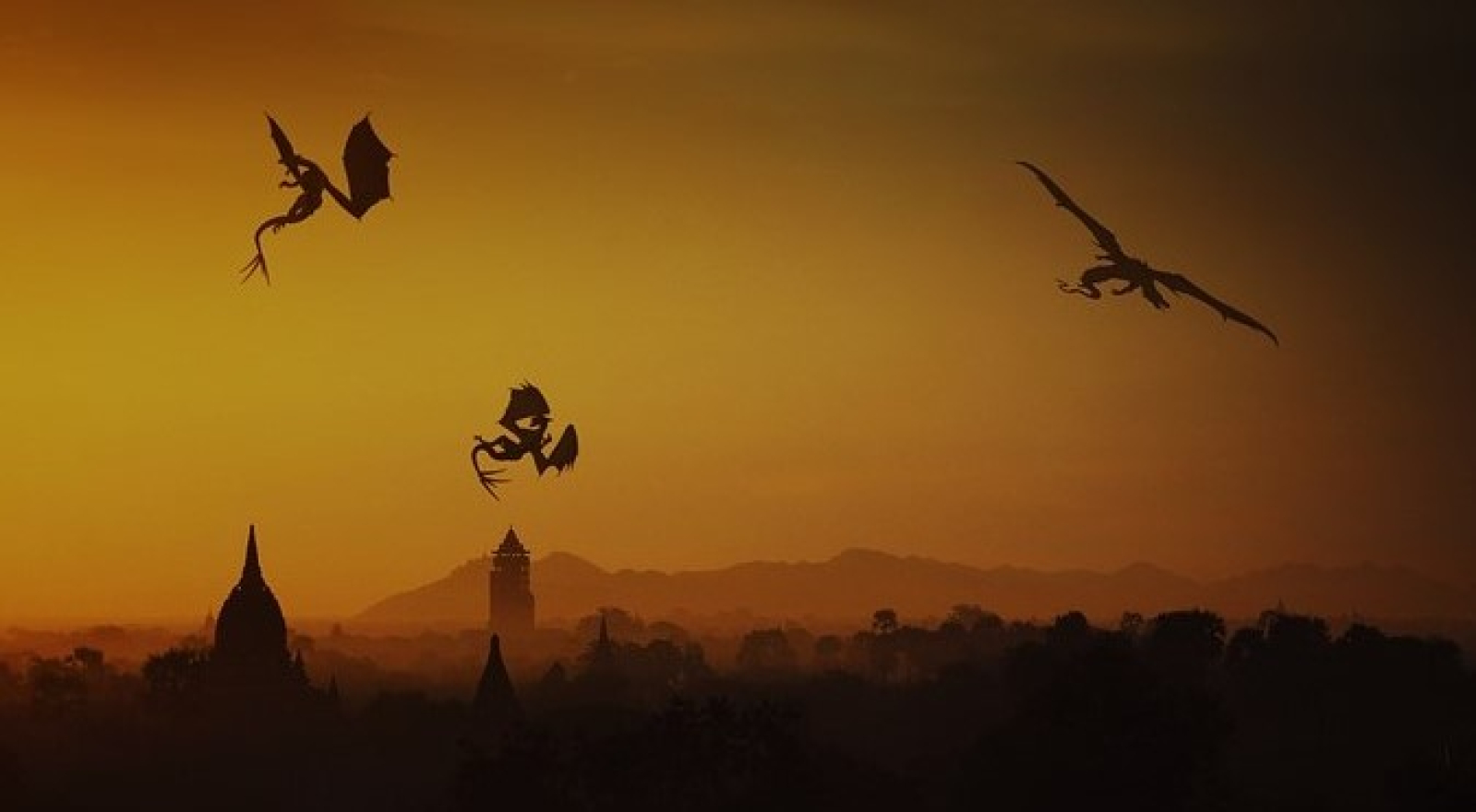 "What the nine!!" A carefully kept ledger falls from the stand as heavy footfalls storm outside. "THATS IT!!" The elderly man hobbles past worried faces unable to stop him.
"YOU USELESS PILE OF SCALES!! STOP STOMPING YOUR RUMP AROUND HERE!! YOU'RE MESSING UP MY LEDGERS!! " Shaking his fist at the bronze dragon.
Cuvar, the city's great protector, stoops his great head to look at the man.

The time before was ruined when the other realms began to tear into the fabric of the Prime Material. It was said to be peaceful and simple, however, it's history is a haunting memory to those living. The Dark Era had begun; it was full of turmoil, fear, and sorrow. Ending after 700 years when the gods and dragons allied themselves with the mortals of the Prime Material. Thus the Civil Age was born, 300 years of peace in the Prime Material with the dragons and gods watching over it.

Magic and its phenomenon are accepted as trivial parts of life. Fey visit once-every-year, rooms weaved of pure magic, food and water available in a time of need. Welders of magic have the eyes of gods, dragons, other powerful beings, and moral organizations watching their every spell. When magic seeps from every crack; who, or what can cause destruction is merely a tale amoung city crowds and a reality for those of memory.
What is to become of a world which has neglected its history? What of the people living with the comforts of magic? Or those who remember the past all to well?

Dragons walk the streets and deities sit in taverns. Drakes are just as common as horses and dragon serpents in the rivers. The people here are accustom to the sight, sounds, vibrations and smells of a dragon, or one of its lesser kin, roaming around. The deities are respected and worshiped as much as sung and danced with wherever they may be. Worship the pantheon and watch the sky for glittering wings, who can bring life just as death.
What is life like when the divine stands beside you? Or when a great beast as the dragon lives just down the street? Will they be an ally or an enemy?


This is what I hope my world will be with a couple of crazy, unusual, strange, weirdos a.k.a. players thrown in. First time DM and first world what could possibly go wrong....or right?

You saw the hook for my world which is the introduction for players, but this is a quick, casual writing of what the world is/has/what I want to explain.   This world includes dragons, dragons, and more dragons......wait wyverns and drakes. Is this a dragon apocalypse game? No, this is a game of what if dragons ruled cities, countries, or just territory. Yes, you can still kill dragons and other dragonoid creatures. There will be different types of dragons, wyverns, and drakes. Besides the dragons, I have 'custom' deities. The 'custom' deities are a mix of different sources and my own twist. They will each have holidays, prayers, and customs. The deities are known, respected and worshiped across the continents. Any deity that is not listed are not worshiped, don't exist, or has yet to be added.     Players are allowed to request to have content added. Examples of content includes; deities, homebrew content, ethnic groups, species, etc. There will be homebrew content included and the DM can/will alter the content if necessary in game, so you've been warned.   Player Disclaimers: DM observes the right to add, exclude, alter, or delete information from the website at anytime. This is as official as it gets for my world content.

Why did you start? Motivation?

I started with Dungeons and Dragons, at first being a fan then diving head-fast into the material and playing with a very close friend. I decided to create a world where dragons didn't feel like paper monsters and magic wasn't all hand-waving. I desire depth and wish to immerse my players and myself into this world.

The world is filled with wonder and danger being one in the same.

Currently only 3 continents exist in Excellence; two continents have "newly" established civilization and territories, while the third is untamed wild. The continents are dragons' territory, mortals merely claim land, but the gods own it all if they so desired. Dragons & gods walk these lands beside the mortals. The gods are to be worshiped, respected, and never stand against them, for their wrath is swift. Magic is in every living being, though one must speak with the dragons and gods if you desire more than what lies inside.

Magic is integrated into the world from the individual, to cities, and all across the realms. Even though an individual can channel magic, it is very limited and requires 'teaching' to gain more spells. Gods, Fey, Dragons, and other beings can give an individual the ability to cast world-changing magic. Most individuals learn from the Dragons and Gods, as both are readily accessible, however can you stand the teaching? Are you willing to sacrifice yourself to grasp this power?
Mature content will be added to this world later as time goes on. The game-play of this world is gory and graphic. The world and its character do not hold back, however, this does not mean the game master will push, or cross the boundaries, set between the player and GM. The tag mature is considered 18+ on WorldAnvil; thus the author considers graphic torture, death scenes, drug use, and triggering topics as such. Surrealism will come into play when content about the other realms is added.

Most of technology is based around magic, though physical mechanisms do exist and are used. The flexibility of magic has allowed for mechanisms to exist outside of their era. Technologies are limited by magic, caster, and the individual's imagination thus you can find many different types of technology that normally wouldn't exist at the same time without it. Example: Elevators made out of magic instead of mechanical parts
Click for where this utilization came from ^

Disclaimer: I do not take credit for any work that is not my own. I try to cite everything I use that is not mine, however, I am human and can forget to cite. If you notice work that is not cited, politely comment on the article and state what is not cited. I will delete the comment after I have properly cited the article. However, I do have original content and also mix it. If you own material and wish me to remove it from the site; let me know, prove ownership of the material, and I will remove it.

I like how you utilized the formatting options that are at your disposal as a free user, mainly the aloud boxes and the columns. Your English is a little bit wonky sometimes, but that's not too big of an issue. If you want, I could take the time to go over your article and give you a more detailed list of what I mean by that.
Mature Fantasy is probably my very most favorite genre-combination, so I'm looking forward to what you make of this, and seeing you in the Discord over the course of WASC. ^^

Please, do expand. I haven't make any content containing mature elements yet, however, the setting has included mature elements in gameplay.......such I go back and tag the Still Womb article as mature??

Magic and wonder around every corner accepted as trivial life to the common people.

This sentence is missing a verb. Also, "wonder" in English means something more similar to a surprise Better: "Magic and miracles around every corner are accepted and seen as trivial parts of everyday life."

No, the gods and dragons keep the people in check as well as the people themselves.

Magic seeps from every crack who, or what can cause destruction is a whisper amoung the city crowds and a reality for those of memory.

This sentence is quite a mess. Let me just try to guess what it should mean, and give you a suggestion based on that: "Magic seeps from every crack, and it is the simple whisper among the city crowds that can cause destruction, burning into the memory of the survivors."

The gods are to be worshiped, respected, and never stand against them for their wrath is swift.

This sentence has a grammatical break, which is a common mistake that can be prevented by simple proof-reading. Better: "The gods are to be worshiped, respected, and never stood against, for their..." OR "People shall worship the gods, respect them, and never stand against them, for their..."   "mechanisms of the physical." better: "physical mechanisms".

The flexibility of magic has allowed for mechanisms that are found in other areas of time.

The word "area" is almost exclusively used for space, and not for time. Better: "...that are commonly found in significantly later eras".     Sorry for the long list. I said I'd expand, and I did. '^^ Good luck with your English-skills, and I'm looking forward to your world. ^^

I see some improvements. You're learning. That's good. ^^