Carve your name as a corsair king with tales of infamy
Sail for fame on the Crimson Shores with plunder from the sea
Blades and screams as we board their ships, terror in their eyes
All I need is a salty breeze, the horizon in my sights
— Vice Sea Shanty


In the Crimson Shores, piracy is the rule, and plunder fills the seas. Here, an influential group of pirate captains known as the Vice have been a thorn in the Krovian Empire's side as they pillage merchant ships leaving Azure Bay. The King of Krov, King Marivaldi Dominus III, would like nothing more than to end the plague of attacks and show leadership through strength. By his decree, a fleet of Krovian warships sail the Crimson Shores with orders to end the pirate threat.   To combat this danger and continue their pillaging ways, a Pirate Confederacy was established. The Vice allows all captains and crew who've made an infamous name for themselves admission. Their alliance is an uneasy one, but together, the Vice continue to prey on merchant vessels while coming to each other's aid when a Krovian Warship is spotted.

In the Crimson Shores, a wild and chaotic harbor along Sea Devil’s Coast offers protection for the Vice away from Krov’s iron fist. The pirate capital Pandaros serves as a city where the spoils of raids and dungeon delves can be sold without oversight. Merchants looking to turn a fast profit and explorers ready to embark on perilous adventures make up much of the infamous city.   Here, the Tempest King and so-called “founder” of the Vice watches over the city, uncaring as long as he receives his cut. Unfortunately, his cut changes when he deems it fit, but the safety provided thanks to his control over the ocean, prevents any warship from coming within his gaze atop the ship sanctuary, Dreadnaught.

The life of members in the Vice is chaotic, perilous, and free of limitations. The wanderlust of exploration and joys of finding treasure far outweighs the threats of sea monsters, Krovian warships, and howling storms. Others seek refuge in the Vice, hiding from another's vengeance or the justice of a nation. The circumstances of crewmates do not concern most pirate captains, but each captain's freedom to run their ship how they deem fit is agreed upon by all.   Because of this freedom, there are no agreed-upon ranks besides captain and the Tempest King's ultimate authority. It is also expected that no captain will try to pass ideals onto another captain, regardless of the circumstances. However, slights between captains have happened and will inevitably happen again. When a slight occurs, captains are free to fight amongst themselves if they wish – as long as their actions do not harm other captains, accidental or otherwise.   Since its inception, the Tempest King has interfered only once in captain disagreements, resulting in both captain's deaths at sea. This act is seen as a result of circumstance for the Tempest King's prized artifact, the Cloudburst Trident, was stolen that afternoon in a grand heist. In his anger, a hurricane compounded overhead, inevitably destroying the ships during their combat. 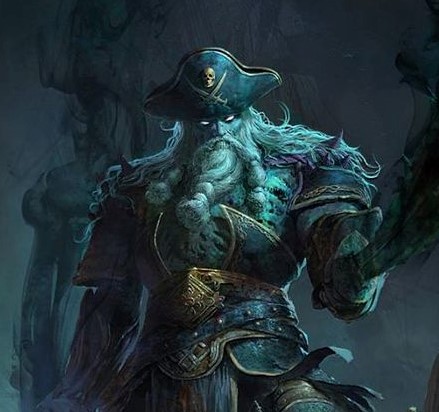