True happiness lies upon the hills of Ulkadia. My alabaster pillared villa rises over fields of olive trees and grape trellis. A foreground of brilliance with the shimmering blue sea as a backdrop. Why would I ever leave such splendor? To fight in the coliseum, of course!


Ulkadia encompasses the southern tip of the Tonarian continent. Flanked by the Crestfallen Mountains to the north and Siren's Whisper Ocean to the south, the region is full of history, life, and peril. Now ruled by the Five Great Cities, Ulkadia is home to the Garuthian people, and their Elemental Ashard Dragon liberator, the All Sight.   Ulkadia is a beautiful region of ancient splendor with lush forests, crystal lagoons, and rocky seaside cliffs. Due to the empire's infancy, much of Ulkadia is untouched by man. Enormous beasts continue to roam the countryside while fey creatures call the woodlands home.   The Five Great Cities of Ulkadia continue to prosper, thanks to an abundance of natural resources such as Ulkadian Bronze, an enhanced alloy perfected by the Bronze Born Forge Dwarves and found only in Ulkadia.

Along the southern edge of the Crestfallen Mountains, dense timberlands cover a large portion of Ulkadia. Locals speak of strange fey creatures that roam the cluttered fern floors at dusk. On the outskirts close to Syrollo, many abandoned homesteads and expedition remnants have been reclaimed by the forest. Deep in the Alabaster Glade, the Ssatzul people work to rebuild their lost empire.

As the most extensive mountain range on the continent, the Crestfallen Mountains divide Ulkadia from the Scabbard Wastes desert to the north. Due to the sheer size and density of the mountain range, only the most prolific survivalists dare journey across.

This colossal wasteland was once a thriving savannah. Thanks to the emergence of Gnoll Warbands, much of the savannah has fallen into chaos, though fertile "islands" still exist. 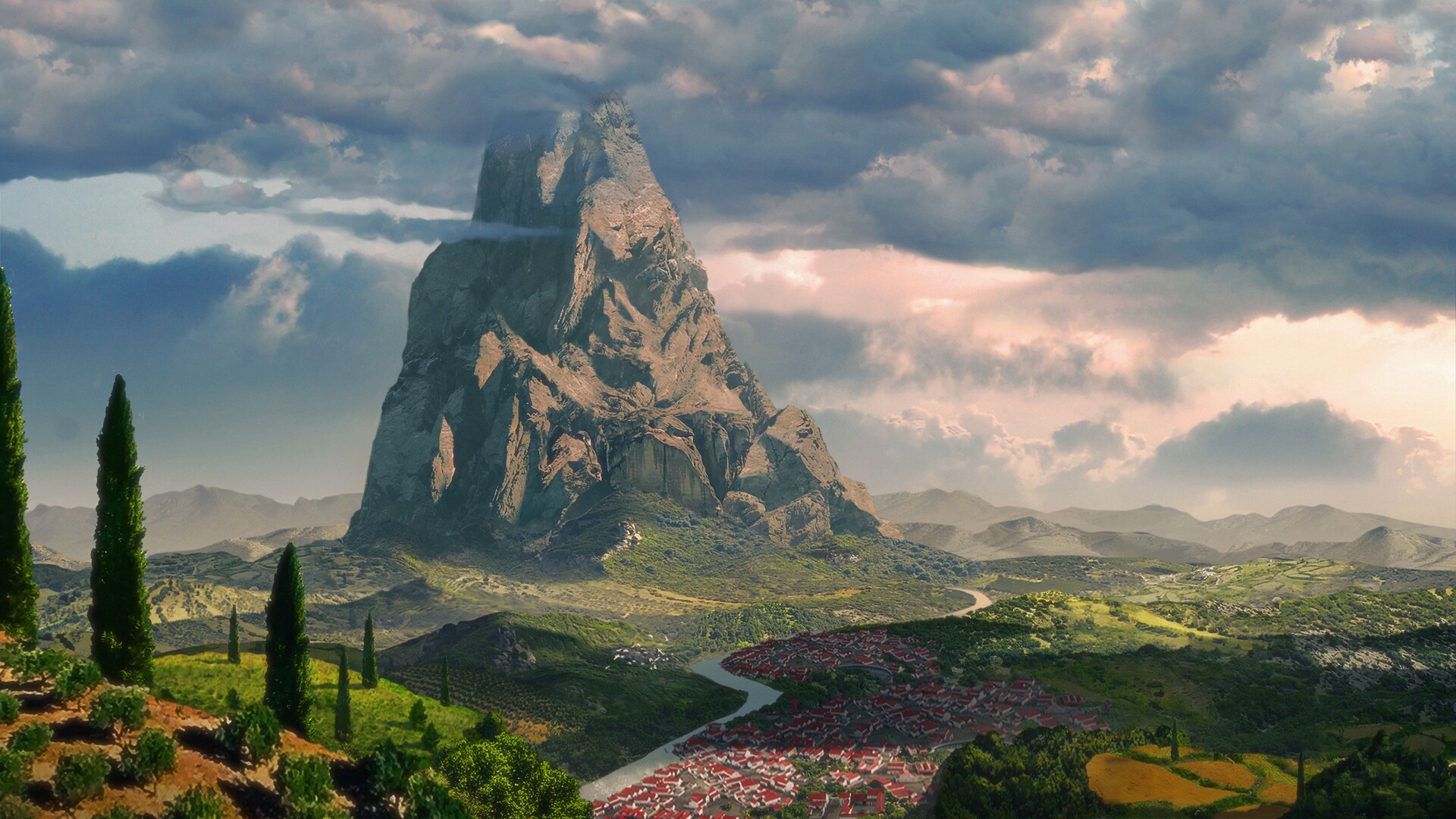 Towering above Antheria, the Gray Peaks is a sight of worship and betterment. High above the clouds, the Temple of Five and home of the All Sight sits, acting as a beacon of hope for all of Ulkadia. Many oracles perform the treacherous climb with the hope of being worthy of having a vision. If worthy, the All Sight will guide an oracle to the bubbling incense waters to breathe deeply and become temporarily blessed with foreknowledge.

Nestled between the Bronze Born mountains and the Desolation, Tonarian Ocean's sparkling waters open into Hallow Wind Gulf. Journeying away from the barren shores of Desolation, much of this lush coastline is full of life. However, one should be cautious when close to the Woods of Old. A great whirlpool will drag you down into a complex cave system reaching far below the surface.

Antheria docks stretch into the Pool of Chimes, which spills out into the Siren’s Whisper Sea. The Pool of Chimes earns its name thanks to armies of trance touched frogs who call the waterway home. When these harmless frogs croak, the sound of soft ringing chimes cascade around Antheria, opening the minds of a democracy of philosophers.

Off the coast of Thekis, Sea's Breath wildwood wraps around the great Everlasting Tears waterfall. This strange waterfall pours into a sinkhole in the center of the woods yet never seems to run dry. These dense spruce and fir trees are infested with all manner of dangerous beasts and contain an unusually high amount of Hydras.

Siren’s Whisper stretches from Ulkadia’s east coast and up to the Ranquem Dynasty before opening into the Great Divide Ocean.

The southern slopes of Ulkadia are filled with rolling hills and lush grasslands. Unfortunately for the Garuthians, the Titanic Expanse is a battlefield. Cyclops and Centaur tribes have been at war since before the founding of Ulkadia with no end in sight. The Ulkadia Empire has remained neutral thus far, but talk of choosing a side to end the bloodshed is growing in the Antheria Senate.

Kyrah’s golden fields of grain lead into a verdant woodland, purposefully left in peace by the city. Great lions and boars roam the outskirts protected by the Kyrah. Kyrah children must prove themselves of age by hunting a lion or boar before joining the Phalanx, Kyrah’s famous military. Be warned, it is wise not to journey more than a day into the Wood of Old. The trees themselves do not take well to trespassers.

Temple of the Five 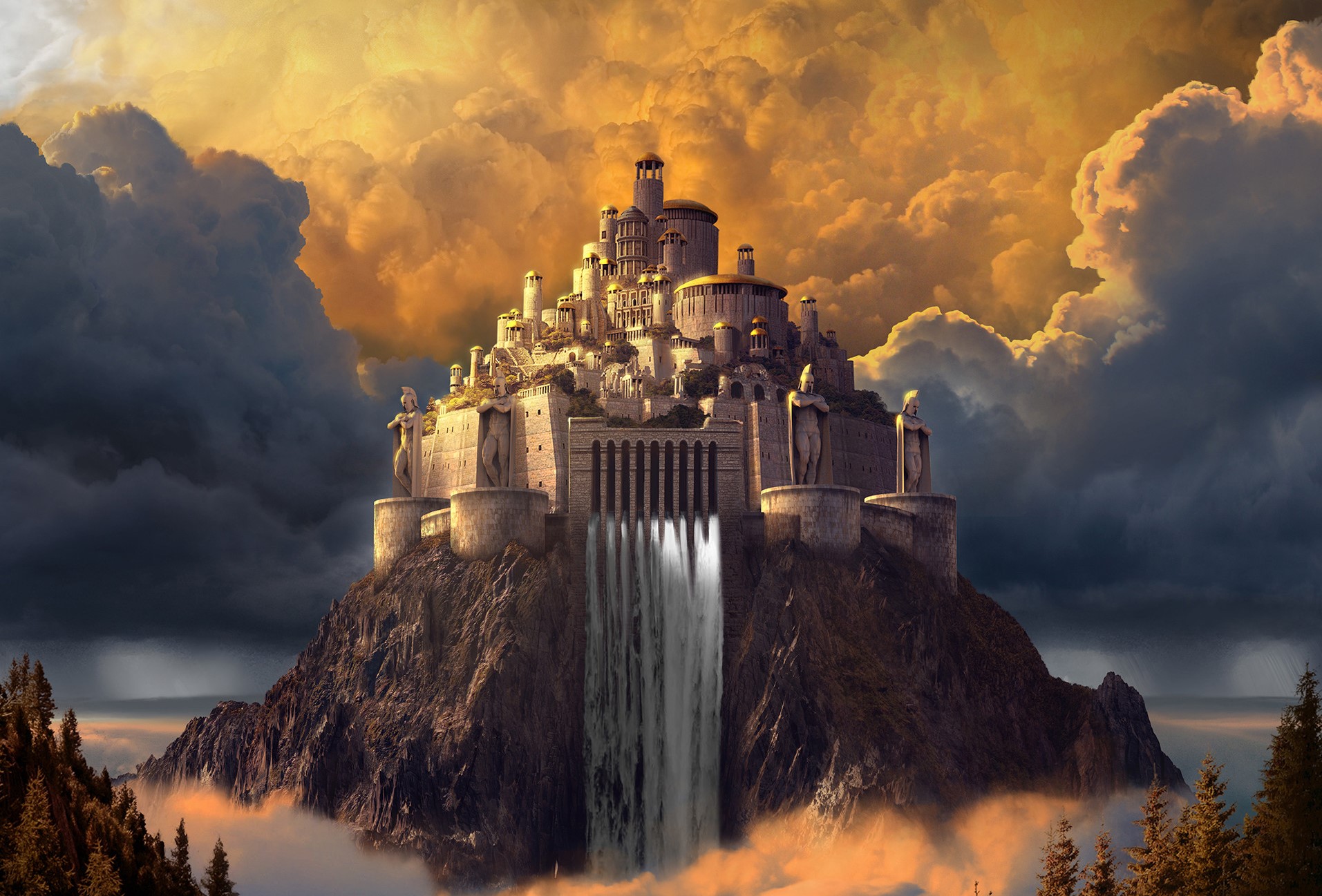 by Alex Peryan
High atop the Gray Peaks, overlooking Antheria, the All Sight watches over Ulkadia from the clouds. The Temple of Five loosely governs the Five Great Cities of Ulkadia. The All Sight communicates through Oracles to the Ulkadian people, choosing to speak in conjured visions or whispered words carried by the wind.   The All Sight never communicates clearly, often leaving those eager to listen with more questions than answers. Nevertheless, Ulkadians live in peace thanks to his watchful gaze and will give their lives to protect him and the Ashard Dragon Flight. 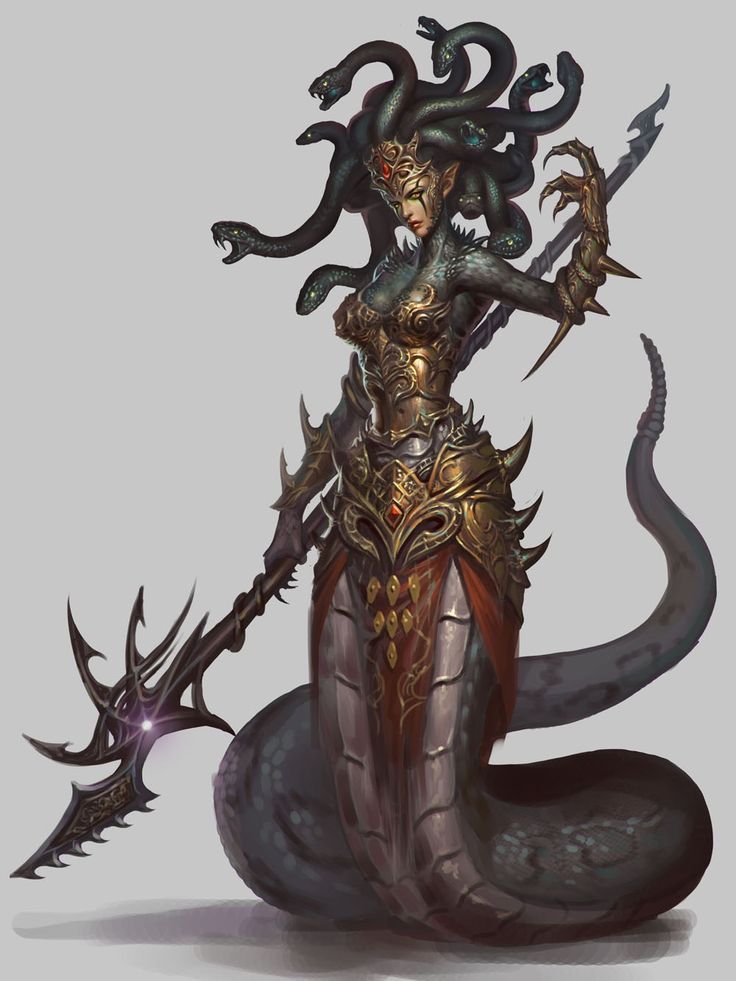 by Pathfinder
A shunned race with forked tongues, coiling serpent hair, and slithering snake-like bodies, the Ssatzul have been forced from their homelands into hiding. Now, the Ssatzul scheme against Ulkadia and the All Sight to one day reclaim the land taken from them.   Blinded with rage following defeat from the All Sight, the Ssatzul Empress sought to bargain for power with anyone who would listen. Kav'wa, the Bard Prince, was the first to take notice and offered his aid.   Unfortunately for the Ssatzul, Kav'wa looked highly upon the Garuthian people and their love for festivals and poetry. The Bard Prince gave what many consider a cursed power to the Ssatzul, granting their gaze petrification—in an ironic twist, making them vulnerable to both their own and their true lover's petrifying gaze.
Geography

The expanse was a very intriguing read. I find myself curious to the specifics of each region. Have you plans to further information on them or is the intent to keep the writings brief to incite personal imagination?   Regardless, a lovely article, and I simply must commend your use of images. Very high quality, carefully hand selected, and entirely appropriate.   Very well done.

Thank you for the comment Aevri! I've actually been rethinking how I present Erenel articles and you identified it perfectly. I think a more layered article design fits well with campaign settings for dungeon masters, players, and readers.   I hope to create region articles that are easy to read primers for players while giving dungeon masters creative space to fill in ideas in their games. For readers who enjoy the lore, I can layer articles for each section with much more detail! That's the goal anyways haha!