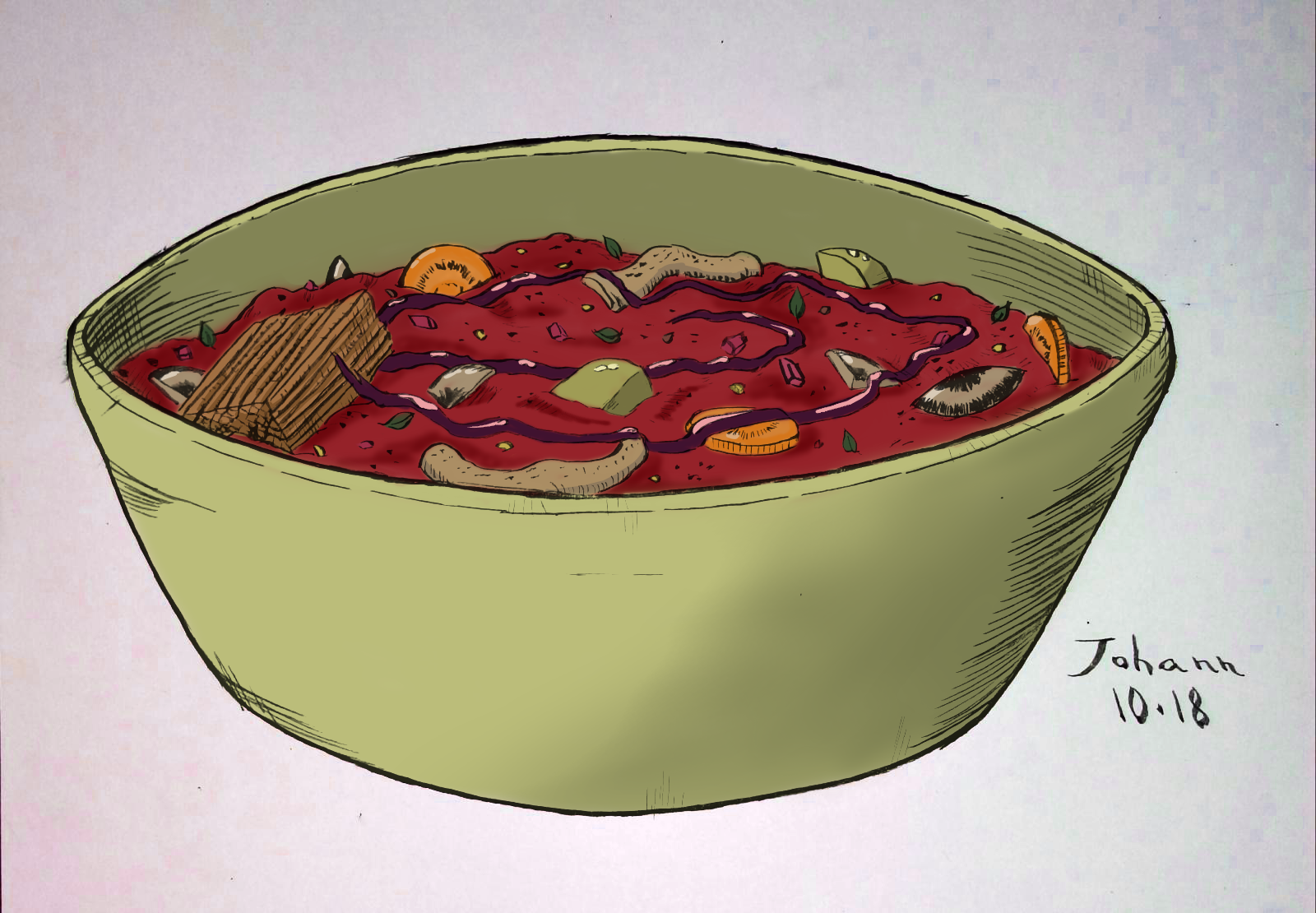 Mansoba is a traditional dish of the Zivar people. Its main ingredient is the Manvali mushroom, that grows in Engoru Savanna mostly in the wet season. It takes an average of 8 days to get done, and is usually prepared for important celebrations.

The specific ingredients may change from tribe to tribe, but the recipe is always similar: the Manvali mushroom, meat, vegetables and seasonings. It is also not uncommon the use of roots, herbs and other mushrooms.

The Manvali cap is separated from its stalk. The cap is put into a jar with a mix of herbs to enhance its sweetness, while the stalk is kept in a pot with water. They are kept this way for at least 5 days before the properly preparation of Mansoba.

The stalks begins to be cooked on moderate heat for 4 days, what takes away most of its toxins.

Manvali is a very toxic mushroom. When consumed raw, its cap may cause a temporary moderate swelling, while the stalk can make a person choke to death.

The cooking water is then changed, the stalks are mashed and begin to be cooked again. The caps are sliced and added in.

Coloring spices are added to "seal" the flavors. Uruku is usually used, giving a red coloration to the grey mash.

Stronger seasonings, such as orina and arimai, are usually added on this day, along with harder meats, vegetables or roots.

The softer meats and vegetables are added. Common choices are zandai meat cubes and ongo skin strips, and, for the vegetables, sliced radishes and potatoes.   Some finishing spices are also added, such as dise pepper and cotran.

The order of preparation is not strict and vary for each region. For example, the northern zivar communities cook the Manvali stalks for only two days before mashing it, adding a special seasoning that helps to counter the toxins.

Mansoba is usually served with many other dishes, specially during celebrations. In central Engoru, these dishes would probably be:

General relevance for the Zivar

Sometimes, it seemed that Mansoba had the power to unite the village. For eight days, people would share spices, herbs, meat and wood. They'd also talk to less familiar faces, know their families and visit their homes, sometimes making many new friends.
— Benti-Zai

Mansoba, for the Zivar, is a very significant dish. Since most of its ingredients are collected during the wet season, it is a reminder of the natural cycle of the Engoru Savanna and is always present in Summer celebrations such as the Thanks for the Rain and the Harvest Feast. Everyone eats it, from the village leaders to the poorest kids.

In Northern Engoru, the savanna is less dry and Manvali mushrooms can be found more often through the year. There, the dish is not only present in the general celebrations of the zivar people, but also in minor ones like marriages and passage rites.

The Kipiba, that live in the Northern limits of Engoru, have a good relationship with the Zivar and have assimilated Mansoba in their culture. They call the dish Zi-Masoba, and use mostly local mushrooms rather than Manvali.

Mansoba reached the status of delicacy in some countries of Talung. Since it is hard to obtain Manvali outside Engoru, only the rich can enjoy this dish, sometimes even through illegal ways.

Mansoba is a dish with many ingredients, each one with its particular taste and texture.

The Manvali stalk mash has almost no flavor by itself, depending on the spices. The cap is sweet, with a slightly rubbery texture.

Zendai meat is fibrous and not so easy to chew, while ongo skin is soft and jelly. When lizard meat is added, it is usually fried before, becoming crunchy and easily breakable.

Orina and arimai are strong, bitter seasonings, that may be hard to swallow if put in a great amount. Dise pepper is soflty spicy, while cotran is used to enhance other flavors.

All zivar in Engoru prepare Mansoba, but their preferences may vary from region to region. This is a result of not only cultural values but also environmental ones, since not every resource is present everywhere.

The inspiration for this dish was maniçoba, a Brazilian dish with an indigenous origin. The main ingredient is not a mushroom, but maniva, the manioc's leaf. It's highly toxic and must be cooked for 7 days before eaten.   How did they found that? No idea, but I fear that some people died in the process...

Nice header! What's the cubish thing to the left? Very interesting dish. I suppose the Zivar doesn't cook their version for 7 days? Do they use other poisons mushrooms? Do the Manvali think that the Zivar are chicken if they don't? Why do they eat poisonous food? Is it a test of bravery?

Thanks for the comment! That's a cube of meat. Probably zandai meat, that is basically a bull. Gotta make an article for it.   And I think there is a little confusion here. Zivar is the name of a people in Engoru, and Mansoba is their creation. Manvali is the name of the mushroom :D   But a test of bravery would be a cool idea regarding foreigners...

Ah! Yeah, I thought it looked like meat...why do they have them in cubes? Oh! Mixed up their names ^^;; sorry!

I'm VERY interested in knowing what you think is interesting here.   And thanks <3