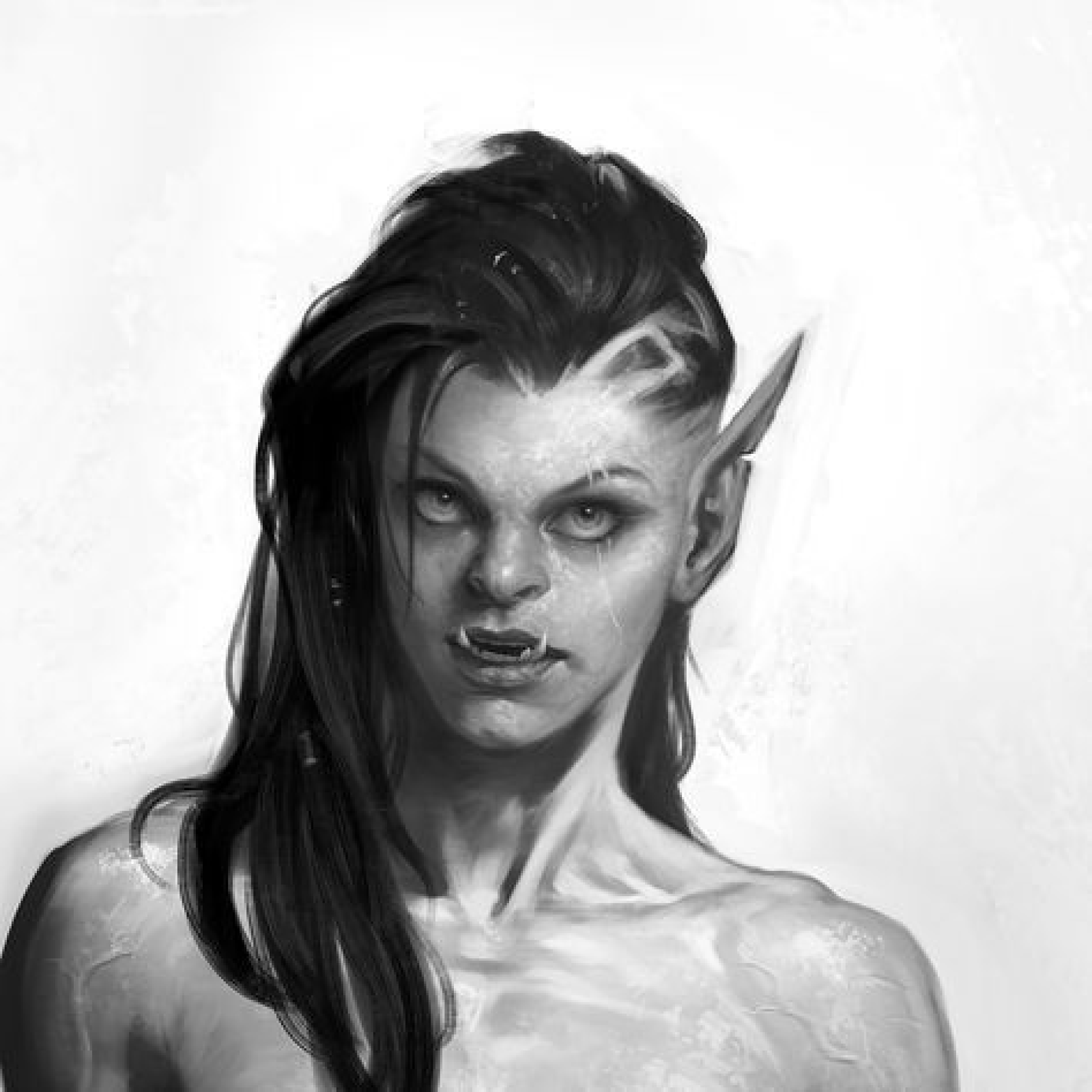 Strong, muscular female orc that has lived a life of hunting and fighting back the "tainted" orcs of Brawl. Long braided, highly decorated hair. Her tusks are well defined and this gains her some respect in the orcs society.

Leafweave armour decorated with crystals and bright feathers from the native storm birds. This method of creating armour is unique to the Zell'hain tribe. Wields obsidian weapons and a beautifully crafted orc bow.

Koli was born on the 17th day of Maret in 1536, far away from the tribes village. Her mother had been out investigating a report of humans returning to the island of Brawl when the tainted attacked her and her wolf. They managed to kill her wolf but were heavily injured in the fight and fled to a safe distance to watch her die. It was at this moment that she gave birth to Koli. No one knows how it happened exactly. Many say that Vax'hain himself saved her that day and that it was a sign she was destined for great things.   It was 21 days after her mother left the village that Koli was carried to the edge of the Endless Lake in the jaws of a young Primal Wolf. The pup laid with Koli and refused to leave her side. This was the first time a Primal Wolf had ever stayed with an orc throughout the night. No one knew what to do at first but there really wasn't much they could do.   From there she was mainly raised by her wolf, Sakorra. She was often too protective to let others come near and from the moment Koli could walk she spent every moment out in the wilds hunting down tainted, fishing in the endless lake or learning to craft weapons and arrows.

You could say that Koli was self taught. Though that wouldn't be strictly true. Sakorra helped to teach her, showing her how to move quietly through the trees and pushing Koli ever further and further. The Zell'hain Orcs are unable to ride the Primal Wolves until they are fully developed and this means that whilst the two grow and learn together, the orcs will run many many miles each day along side their wolf. Learning this way was hard and involved a lot of trial and error.   Though this style of "self teaching" took up a lot of time, there was always more to know. Most importantly was how to eat. The village elders spent much time with the younger Zell'hain Orcs teaching them about the different uses of the many plants that could be found scattered around the island. This teaching would include, medical uses, cooking uses, flavours, which plants burnt and how and how to make cloth and cordage from different plants. It was with such knowledge passed on through the tribe that the Zell'hain Orcs quickly became talented survivors and maintained their place on the island, even when times got hard.   When her survival training was done, and in between her hunting and gathering, Koli found time to craft. The Zell'hain Orcs are known for their ability to make Leaf Weave armour. A special process that creates a very hard almost leather like armour from large leaves of the Kurri plant. This was not something Koli took to however and found her hands far more suited to the work of woodcarving and calligraphy. She would spend much time by the fire in the evening, propped against Sakorra, carving a fresh piece of wood into the shape of a small wolf or a storm bird. She later move her skill over to bow making and became know for making very ornate hunting bows.

It is important that everyone in the tribe pull their own weight, though the Zell'hain Orcs lived a fairly comfortable life and didn't often go without, it was a mark of respect to help the tribe. Not just to the tribe but also to yourself. Often the orcs were known to be very hard on themselves and be able to push themselves far past their limits to try and prove, to themselves, that they were good enough. Koli would always make sure when she went out hunting that she would speak to the elders and the healers first and find out what they needed. This gave her the chance to forage and bring supplies back. Given her speed and skill she was often able to travel futher and reach areas that others couldn't. She was therefore able to bring back rarer and more precious materials.

She is conflicted in her purpose in life and the pressure that the tribe puts on her by expecting greatness. Her aim is to not let the tribe down, to protect them at all costs, to hunt down and rid the island of the tainted and to rid her heart of guilt.

A skilled hunter and survivalist. She was among the fastest at traversing across Brawl . She knew the island like the back of her hand.   She was also a talented crafter who took a particular shine to woodwork and produced magnificent bows.

Far too selfless, she would give her own life to save anyone from her tribe without a though. This often leads to very dangerous situations.

Like most Zell'hain orcs she keeps herself and her equipment very clean and in good order.

Extremely charismatic and doesn't shy away from a crowd. The tribe has come to rely on her opinion and luckily for them she always has one. She is decisive and quick witted, a trait that often irritates the older members of the tribe that have a more cautious outlook.

Sakorra is the Primal Wolf of Koli. Sakorra is very defensive of Koli, even more so than the natural connection between Primal and Zell'hain. She is a fierce hunter, unmatched tracker but most of all a giant softy.

Speaks only a local dialect of Orc.

The Zell'hain tribe do not put value into material possessions. They are expert crafters but they work together and barter and trade among themselves. There word means a lot in the tribe and so they will often use favours and boons to trade.   Koli is in great standing in the tribe and as such is considered to be very wealthy. The tribe would do anything for her, as she would do anything for them.   She personally collects the feathers from storm birds to decorate her hair and armour and this has become somewhat of a fashion in the tribe.