White River spans the Virendran subcontinent, running from south to north-east. From the Wyrmspine it meanders through the Virendran Heartlands, before meeting and absorbing the southern branch of the Zweeflaive. There it turns east and flows across the Dowamar Lowlands, ultimately discharging into the Bulwark's Heel Gulf.   Due to its unidentified source and the diffuse nature of the river through the Greymere wetlands, White River's total length is unclear. As portrayed on official maps, it runs at least 480 miles long.

It is commonly accepted that White River is named for the pale sediment it collects in the foothills of the Wyrmspine. However, elven scholars contend that the name stems from an old Elvish word similar to the modernised wight, as the river was once considered as the forest boundary and therefore the edge of human territory.   The lower course of the river was historically called The Frayed Ribbon, because of the extensive tributaries out of Greymere and the large delta at its mouth. It was officially renamed after Teriman Unification, to conform with standard naming practices. Locals still refer to the river as the Ribbon. 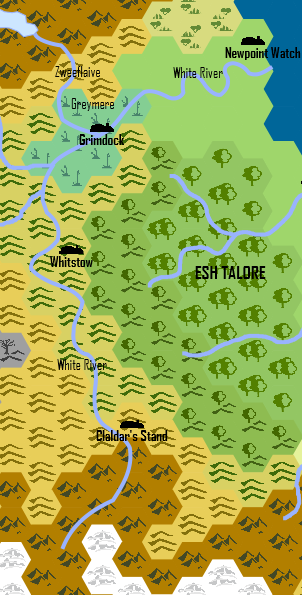 (from source to Cladar's Falls)   As with all rivers, academics claim the true source of White River must be a portal to the Elemental Plane of Water. No such portal in the Wyrmspine has been found, although a popular hypothesis claims that the glaciers in the midst of the mountain range are fed by the same elemental spring.   Hundreds of unexplored mountain streams emerge from slopes and cave mouths to feed White River's upper course. Rapids and cascades carry water through the foothills, culminating with the falls at Cladar's Stand. Through the foothills of the Wyrmspine the river gathers a distinctive white sediment (see Natural Resources).   The upper course of the river is impassable to all transport vessels. However, the river is still used for trade thanks to Gnomish ingenuity. At Claldar's Falls, a series of nets and chutes are used to collect special barrels and crates that are regularly sent downriver by villages higher in the foothills. This resource network is appropriate for non-fragile, inexpensive goods. It is not without losses, but they are comparable to those of overland trade caravans through the untamed terrain, and goods arrive much faster.

(from Claldar's Falls to Greymere)   White River flows into the Virendran Heartlands from Claldar's Stand, and gathers water from minor tributaries and lakes through the hills. The river holds a steady course north, most notably passing the young trading town of Whitstow, before it absorbs the Southern Split River (Zweeflaive in original Dwarven) - its single largest tributary. The merging of the two creates the Greymere, where White River deposits the majority of its sediment. In Greymere, the rivers natural course is obscured as the water table breaches the surface of the land; the wetlands are almost 100 miles across.   Through the Virendran Heartland, the river is passable by shallow barges. Thorpes and hamlets rely on the relative safety of river for trade and travel; most are located at the locks or inclined planes that grant barges passage through steeper terrain, and maintain them with small tolls. In Greymere, artificial channels are dredged to allow the passage of trading boats, but deep-keeled sea-faring vessels cannot pass any further inland.

(from Greymere to Bulwark's Heel Gulf)   White River emerges from Greymere as a series of streams spread over several miles. They are slow moving and shallow, except for the two shipping lanes dredged and maintained by a station of the Teriman Crown Engineers based in Grimdock. Minor branches are prone to abrupt migration during stormy weather, but ultimately recombine into a single channel. The river drains water from the slopes of the Bulwark mountains to the North, and from the entirety of the Dowamar Lowlands. It deposits into Bulwark's Heel Gulf, near Newpoint Watch.   The fertile land around the river is irresistible for farming communities. Those on the southern side in particular have deforested the borders of Esh Talore, which has led to enhanced soil erosion in recent generations. Modern settlements are not long lived; they frequently shift with the meanders of the river, or in some cases suffer catastrophic land slips. The most fatal and famous of these in recent times was The Disappearance of Turnbury.   Owing to the width of the river and the soft soil of its banks, bridge construction is not considered viable for the last 80 miles of White River. A few ruins of bridges, built by advanced civilisations long past, stand along the banks and are often repurposed as lookout stations.

White river spans hundreds of miles of Virendra, and so its ecology is highly varied along its course. The most notable ecosystems are mentioned here.

The confluence of White River and Zweeflaive River creates a huge area of wetlands at the northern edge of the Virendran Heartlands. Coloured an off-white by the sediment of White River, the became known as Greymere. Travelers through the fen report that the region seems still and lifeless; it has a persistent low mist, the water is milky and opaque, and all sound muffled.   On the contrary, Greymere is teeming with life - although most creatures avoid the shipping lanes that are maintained through it. Rich mineral flows feed an abundance of aquatic and plant life which sustain a robust food chain and unique local specimens.   A number of settlements surround Greymere, but the only one within its limits is Grimdock. It has long been tasked with maintaining the passable channels through the fen, but upon the incorporation of Virendra into the Teriman Empire, the town received a much needed influx of skilled people and resources. Any vessels passing through Greymere must pay a toll in Grimdock, so the town has become quite wealthy.

Near the mouth of white river, the surrounding lands are saturated and soft. This forms a natural breeding ground for tunnelling creatures, many of which migrate long distances to return to their nurseries.   Most of these creatures are violently defensive of their young and are best left undisturbed. Agitation of parenting groups, and especially the poaching of eggs or young, has been linked with attacks by creatures against travellers or settlements, including a number of mudslides that have caused vast areas of land to disappear.

Specimens unique to parts of White River are listed here:

(a.k.a. Stone-skinned Snapper) A species of Crocodilian native to Greymere. Their hide perfectly matches the unusual hue of the waters, and they can precisely locate movements in the water within a quarter mile. Alabaster Snappers are obligate carnivores and are large enough to pose a threat to humanoids - adults are normally four to six metres in length. Researches have shown that this reptile consumes and somehow processes sediments and uses them to colour and strengthen their hides. The sediment in White River contains trace Arcanite (see below) which affords mature Alabaster Snappers a degree of resistance to the effects of magic.

(a.k.a. Giant Mudworm) A type of worm found in the mudflats near the mouth of White River. The worms are only seen at the surface when feeding. They are omnivorous scavengers, but have been known to hunt in some circumstances, using their natural tunnelling ability to attack from below. Dowamar Mudworms grow to about two metres long, but when they have not fed for several weeks they are able to consume objects 90% of their body length.

The white sediment that characterises White River consists of impure Arcanite, largely dispersed in limestone. The origin of the Arcanite is eagerly sought after, and likely connected to the true source of the river. The concentration of Arcanite in the water is very low, but has some noticeable effects; the most extreme being the magical resistance of Alabaster Snappers. When stretches of water are exposed to extreme energies, either natural or magical, the sediment becomes active and heightens the energetic effects.

The river marked the historic borders of the Virendran kingdom, which lay to the west. The grand forest of Esh Talore lies to the east, although those woodlands have receded in recent decades as human-dominated settlements have spread across the river.   White River was key in the surprise Orc invasion of Virendra, and consequent fall of Burl. At the time, Virendra was barely involved in the First Orc war, and was resisting the expansion of what would become the Teriman Empire. There was no awareness among any faction west of the Bulwark that the Orc clans had naval capabilities beyond rafts and small barges for river crossings, so when an armada of fast-moving Orcish longboats entered the river, there were no coastal defences to repel or even notice them. Driven by sinister arcane powers, they gained almost 60 miles of territory before a warning was sent out. After Teriman unification, the town of Newpoint Watch was established near the mouth of White River as the new regional power centre.

The elven communities in Esh Talore saw the river as territorial limit for thousands of years. Since Teriman Unification, elves have raised numerous objections to new human settlements on the Eastern side of the river. These were formally acknowledged, but the growth of small fishing and farming communities has not stopped. Although the river is not culturally important to the Elves of Esh Talore, nor a major resource, there is growing resentment at the perceived overstepping of a natural boundary.

The main gnomish presence along White River is at Claldar's Stand, a predominantly gnomish settlement which acts as a trade gateway to the Wyrmspine. Gnomes find life beside the busy river is a good prophylaxis against Bleaching.

The Dowamar Lowlands are a vast, flat plain with land well suited for sedate farming, and is a natural home for Halflings. White River serves as the spine of their agricultural network, nourishing the land and enhancing trade connections. Halfling markets are frequent along the river, and act as hubs for the countless farming and fishing hamlets where most of the population resides. Halflings do not seem to attract the attention of the local burrowing predators, likely due to their size.   Halfling communities do not present a formal leadership structure to outsiders, and accepted incorporation into the Teriman Empire with characteristically cheerful assent. In truth, the added protections afforded have come with almost no downside; halflings still ply the land for food and live in comfort. Imperial rule means that their river markets are protected for a standardised tithe, rather than at the whim of mercenary bands.
Alternative Name(s)
The Frayed Ribbon (partial)
Type
River
Location under
Virendra 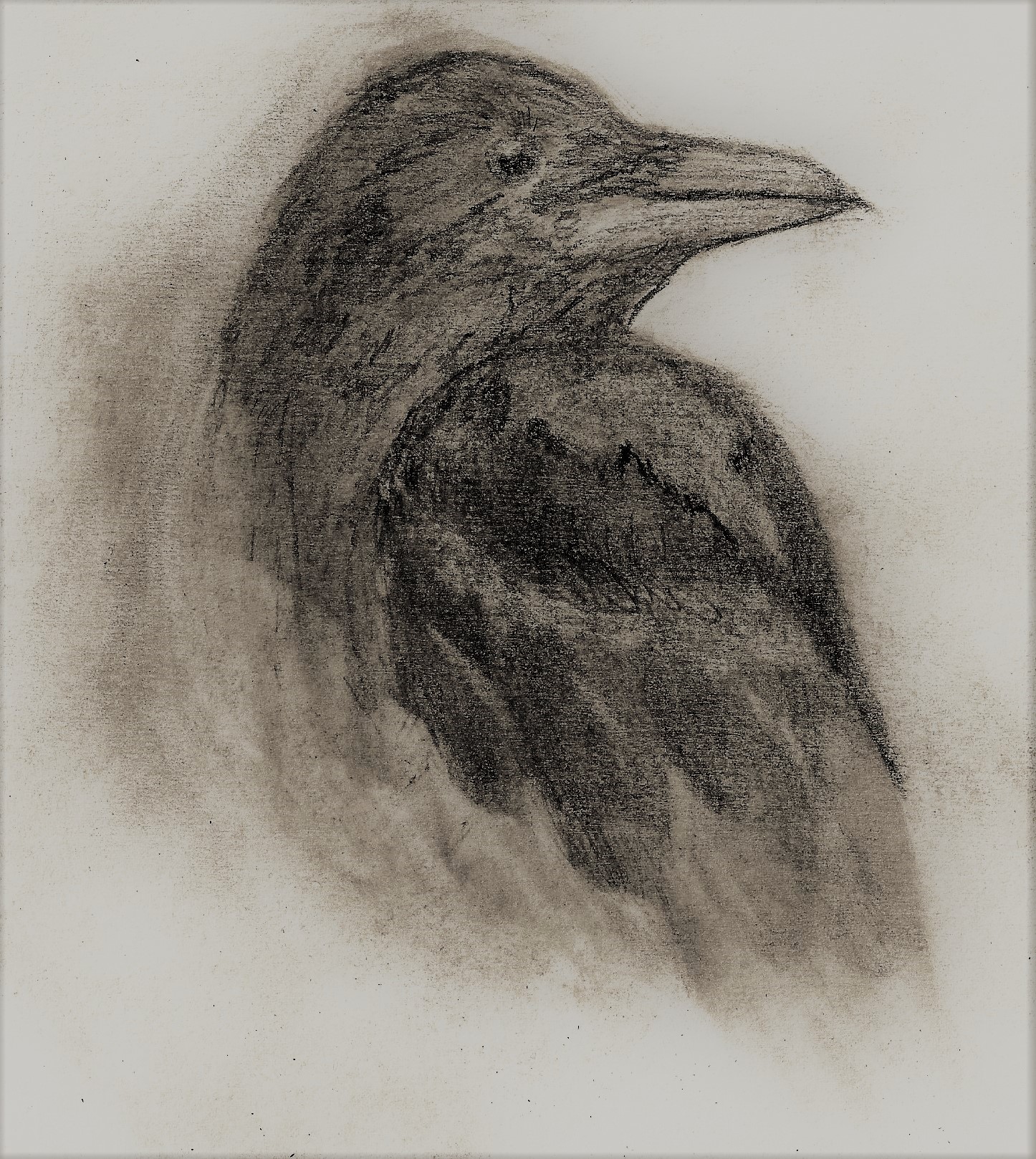 I really like your article! It's very detailed and I like your history section on how the river effects the lives of a veriety of peoples.

Thank you! I really enjoyed this challenge (first one I've done), it was great for filling out some of my map and then having to deal with the consequences.

Nicely done article. You really put some thought in the impact of the river with the end of the river being unfit for settlements do the ever changing flow. Also the crocodiles becomes somewhat resistant to magic due to the arcanite is interesting.

Thank you! I thought it was a great writing prompt, there were so many things to get inspired about.