Awww! Look at his cute little eyes! I could just eat him right up! Ahem So, the Polipo. The octopus that lives in the trees! These cute little creatures blend into jungle environments easily. Their whole lives are usually spent off the ground and away from danger. Polipos will need to get themselves wet every couple of days otherwise their leaves that grow out of them will shrivel up and die. This will make them more apparent and would put them in a dangerous situation. Due to this unique requirement they also need adequate sunlight for their disguise to stay alive.   Polipos are carnivores, although have no real ways to kill anything larger than themselves. This means Polipos eats mostly insects and small birds. Polipos will mate for life and can have as many as 100 eggs! Due to this large amount of offspring, it will allow Polipos populations to stay high even in large carnivore territory. As an escape mechanism, a Polipo will shoot green colored ink that is slightly acidic at its attackers eyes. They will only attack if provoked, and will usually just try to hide instead.

Polipi are leafy, small, and terrestrial octopuses that live in the trees of jungles. Therefore they are typically green in nature and are covered in leaves, making them look like parts of the trees they climb around in. Polipi have the same squiggly iris eyes of an aquatic octopus and of course have many tentacles to grasp onto branches and twigs. Hidden beneath their leafy dorsal side, is a beak that they can use to poison their victims and make it easier to eat them.

Polipi will mate for life and can have as many as 100 eggs. The baby Polipi can grow into full adults within a month, and until then remain close to the mother. Polipi make their nests high up in the highest canopy of the trees to allow for maximum sunlight and rain to keep their brood doing well. This makes them slightly more vulnerable to flying predators, but it is still hard to spot a Polipi nest, as it easily blends in with all the leaves. Due to this large amount of offspring, it will allow Polipi populations to stay high even in large carnivore territory.

Polipi survive best in wet environments such as jungles, swamps, and mangroves.

Polipi are unable to eat anything that is bigger than themselves. Therefore, they mostly eat insects and small birds. They are carnivores.

Polipi must live in warm, wet environments that have almost no seasons, so they can constantly blend in with their leafy environments.

Polipi are located across the jungles, mangroves, and swamps of Southern Mitralia and the island of Janshima island.

Polipi have very good eye sight and can see a threat much farther away than that of a human. With their strange eyes, they can also see around some objects without moving.
Average Weight
2 - 5ibs
Average Length
1' - 2'
Body Tint, Colouring and Marking
Most Polipi are some shade of green, depending greatly on the environment they are from.
Beastiary 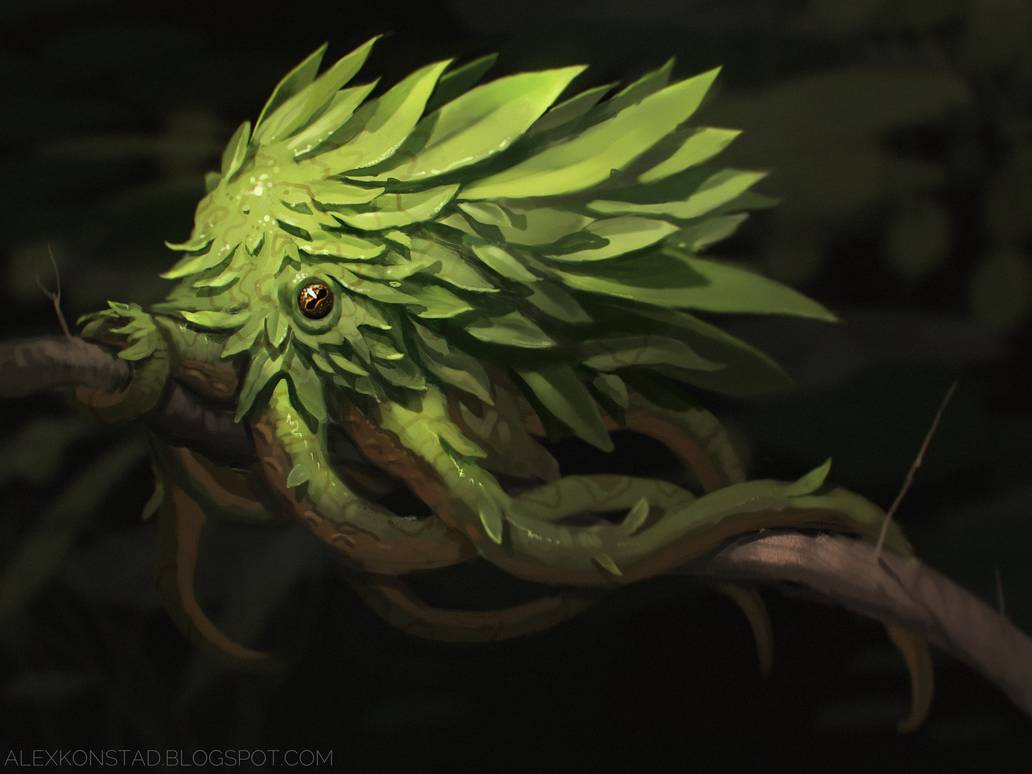 Polipi are octopus-like creatures that live in the absolute heights of many trees found in jungles, swamps, and mangroves. Though carnivorous, they pose to real threat to anything bigger than themselves. Often they try to hide in trees, eat small birds, and occasionally climb down their trees in search of insects to eat. When they come down to feed on insects, they are most vulnerable and only do so when they have a young brood to feed.

Monster Level | 1
Total Hit Points | 9 HP
Monster Ability/Powers:
Polipi have the ability to bite things with their beaks, which are poisoned, and grapple stuff with their tentacles. They also have the ability to shoot green colored ink that is slightly acidic, and they will try to target the attacker's eyes.

This is a really nice image! I like the image and article. (now my wizard -Akimotos- wants one as familiar.)