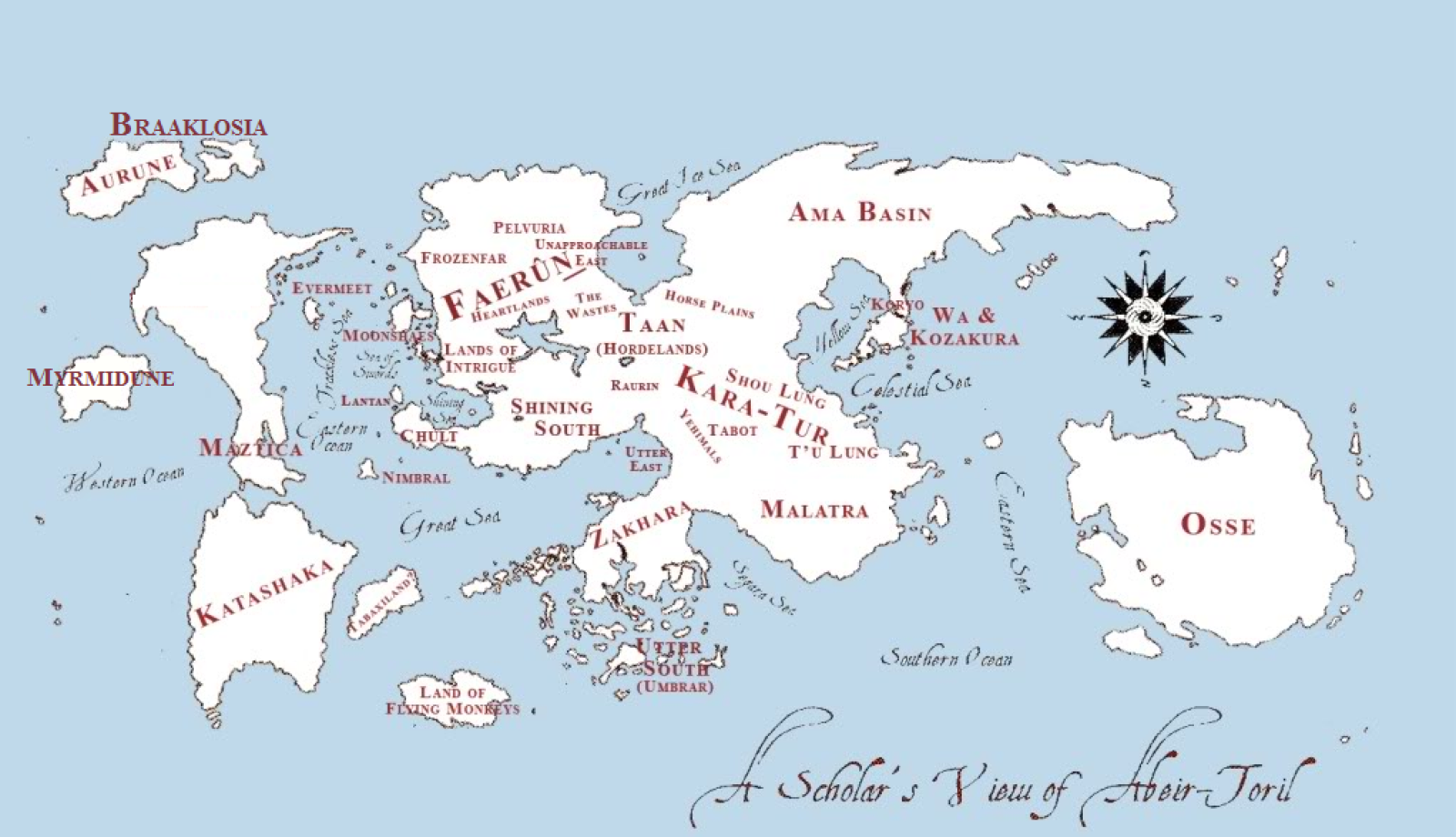 Toril is the third planet from the Sun in Realmspace. It is orbited by one moon named Selûne, and by a cluster of asteroids, known as the Tears of Selûne. Throughout most of its history, Toril is known less commonly as Abeir-Toril. The name "Abeir-Toril" is archaic, meaning "cradle of life" in an extinct and forgotten language. Since the Spellplague and the revelation of the existence of a planetary sibling known as Abeir and the fact that both Abeir and Toril were once united, the latter name came to informally mean the formerly united worlds of Abeir and Toril.

The Forgotten Realms hosts a world of strange lands, dangerous creatures, and mighty deities, where magic and supernatural phenomena are quite real. Long ago, the Earth and the world of the Forgotten Realms were more closely connected through Keléstia. As time passed, the inhabitants of planet Earth forgot about the existence of that other world and that world became closed off to the stars beyond it.   The continent of Faerûn holds the greater gaze of the world of Toril, part of the worlds comprising Abeir-Toril. An Earth-like planet, the differences are vast. Unlike Earth, the lands of the Forgotten Realms are not all ruled by the human race: the planet Toril is shared by humans, dwarves, elves, goblins, orcs, and other peoples and creatures. Technologically, the world of the Forgotten Realms is not nearly as advanced as that of Earth in the 20th century; in that respect, it resembles the pre-industrial Earth of the 13th or 14th century. However, the presence of magic provides an additional element of power to the societies. There are several nation states and many independent cities, with loose alliances being formed for defense or conquest. Trade is performed by ship or horse-drawn vehicle, and manufacturing is based upon cottage industry.

Toril consists of several large continents, including Faerûn. The other continents include Kara-Tur, Zakhara, Maztica, and other yet unspecified landmasses. There is also a vast subterranean world called the Underdark beneath the surface.

A true resource of the Forgotten Realms is its magic and local pantheon of gods. Religion plays a large part in the Forgotten Realms, with deities and their followers being an integral part of the world. They do not have a passive role, but in fact interact directly in mortal affairs, answer prayers, and have their own personal agendas. All deities must have worshipers to survive, and all mortals must worship a patron deity to secure a good afterlife. A huge number of diverse deities exist within several polytheistic pantheons.   The Resource of Gods comes as follows:   Much of the history of The Realms are chronicled in spoken tales and bard's songs and they concern the actions of various deities and The Chosen (mortal representatives with a portion of their deities' power) such as Elminster, Fzoul Chembryl, Midnight (who later became the new embodiment of the goddess of magic, Mystra), and the Seven Sisters. Above all other deities is Ao, the Overlord. Ao does not sanction worshipers and distances himself from mortals. He is single-handedly responsible for the Time of Troubles, or Godswar.
Alternative Name(s)
Forgotten Realms, Abeir-Toril
Type
Planet
Location under
Toril's Orbit
Included Locations
Related Reports (Primary)

Remove these ads. Join the Worldbuilders Guild
Codex of Toril