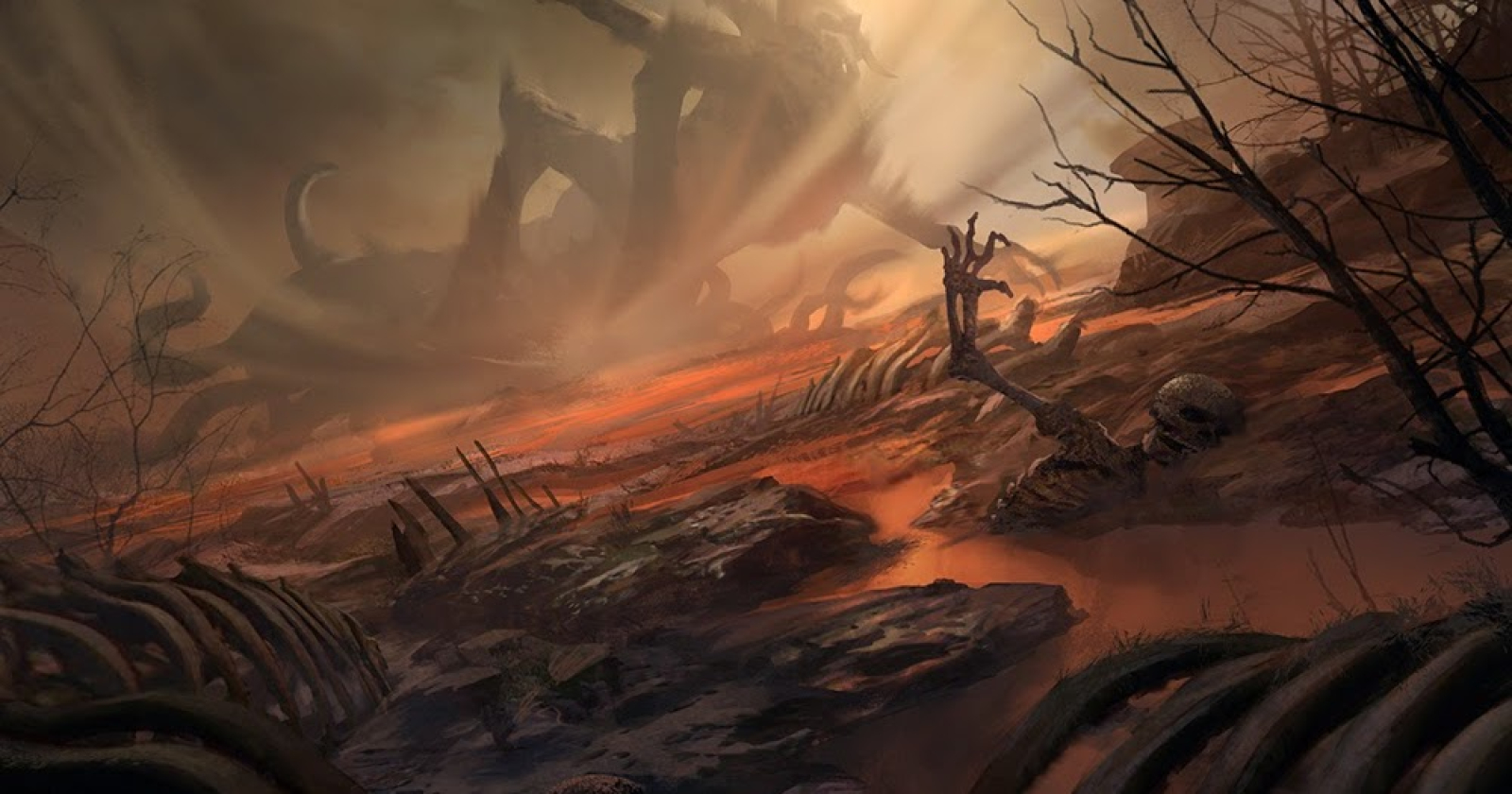 The Tarterian Depths of Carceri

The Tarterian Depths of Carceri, also known as Tarterus, was an Outer Plane representing alignments between chaotic evil and neutral evil. Situated between Hades and the Abyss, Tarterus was a plane of contention between the warring demons and daemons but few of those interlopers would challenge the native demodands.   The six layers of Tarterus had a seemingly infinite number of worlds arranged like a string of pearls stretching into the air-filled void. In the top layer, Othrys, each orb was about the size of a Prime Material world and averaged about a hundred miles apart. In each successive lower layer the planetoids grew smaller and farther apart. There was no sun but the soil of each orb gave off heat and a dull reddish glow, similar to the phosphorescence of fire beetles. The planets did not rotate and there was no day or night unless a greater deity wished it so in their realm. Seasons and weather occurred randomly and what little plant life there was would rapidly mature after rainfall and then wither hours later.   The barriers between layers were always located at the deepest points on each planetoid and always lead to the same sphere in the next layer, so the worlds of Tarterus can be imagined as spheres nested like Matryoshka dolls and each layer contained a string of orbs of a particular size.

The first layer of Tarterus was named for Mount Othrys which was really two mountains on two adjacent orbs each about fifty miles high joined together at the peaks in a massive citadel. The worlds of Othrys were so close together that a traveler could easily fly from one to the next. For those who did not wish to fly, the river Styx flowed through all the worlds of this level in the usual mystical fashion. Many other rivers fed the Styx, and the surfaces of this layer were mostly marsh, bogs, and quicksand. Othrys was the brightest (due to the proximity of equal-sized worlds on either side) and warmest layer; no worse than a hot summer day on the Prime Material Plane. Other than the mountains, the ground was soft, like peat, and cut by deep chasms. Othrys could be reached via the Astral Plane and had portals to the Abyss, Hades, and Concordant Opposition.

The planets of the second layer were smaller than those of Othrys and about five hundred miles apart. Plant life in this layer was both abundant and deadly. The flora in the overgrown jungles and grasslands secreted acid that could eat through metal in a minute or less.

The third layer of Tarterus had planetoids smaller than those of Cathrys which hovered about five thousand miles apart. The air between orbs was torn by harsh winds which carried poisonous dust storms from world to world, making most surfaces a barren desert. Huge tornadoes periodically swept through, carrying anything in its path to distant locations or even an adjacent orb.

The worlds of the fourth layer were spiked with colossal mountains rising above deep chasms. Hundreds of miles from base to peak, the terrain of this layer made the orbs more asymmetrical than in other layers. Adjacent orbs were five hundred thousand miles apart so they appeared to be small spiky red moons in the utterly black sky. Legions of demons and daemons made lairs in the canyon walls.

Black, acidic rain and snow assailed the many worldlets of the fifth layer from giant black clouds that moved between them. On individual worlds, islands barely higher than sandbars came up over the waves of shallow, cold oceans. The snow only stuck to the peaks of any mountains, melting to cover the rest of the surfaces with one to six feet of a weak acid that did not affect metal or stone but could eat away cloth in a minute or less. All barriers between this layer and the next were under water. The orbs of Porphatys were millions of miles apart and barely discernible even when not blocked by demonic clouds. A pilotless vessel called the Ship of One Hundred endlessly sails the seas of Porphatys.

The smallest, coldest planetoids occupied the sixth layer and were so far apart that neighboring orbs could not be seen at all. Every surface was covered in dark ice that showed streaks of red and the air was so cold it made breathing difficult. If any layer existed beyond Agathys, the barriers would have been buried under miles of ice.
Alternative Name(s)
Carceri, Tarterus
Type
Dimensional plane
Location under
Outer Planes