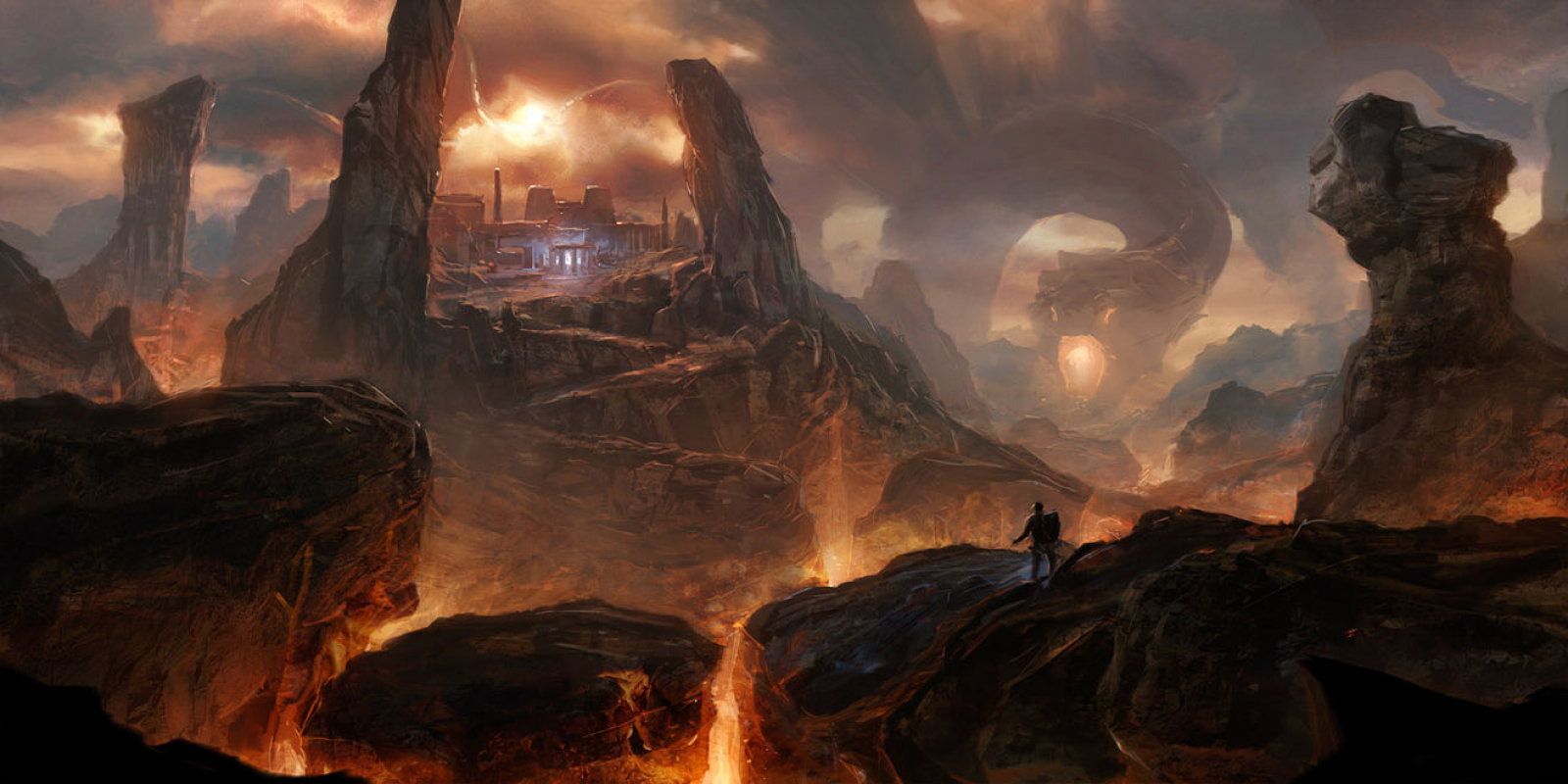 The Infinite Layers of The Abyss

The Infinite Layers of the Abyss was the birthplace of the demons, a chaotic evil universe unto itself with uncountable layers of infinite variety connected haphazardly.   The Abyss is connected to the Astral Plane, Pandemonium, Carceri, and Concordant Opposition. It was estimated that the Abyss had 666 possibly infinite layers but no one could be certain. The first layer, named Pazunia after the demon lord Pazuzu, was described as a barren, dusty place baking under a red sun, broken only by great iron fortresses, huge holes in the ground, and the river Styx. Some branches of the Styx flowed down the holes (which were conduits to the various layers) and some of these holes supplied water to the Styx in reverse waterfalls.

The number of layers in the Abyss was unknown and perhaps unknowable, but this is an attempt to list them regardless of the time of discovery. Each layer had its own characteristics, which were as varied as the demons themselves. All types of terrain, atmosphere, weather, gravity, and material composition were represented in the myriad layers. Some examples are: Air-dominant—zero gravity, no matter except air Ash—blowing dunes of ashes Battleground—Blood War or other City—warrens and slums to citadels and palaces, teeming with demons Earth-dominant—solid rock tunneled by the inhabitants Fire-dominant—everburning flames with salamanders, etc. Delusion—appears to be Normal but the flowers are poisonous or the trees attack Desert—endless tracts of black, white, or red sand with no water Glacier—infinite black, white, or orange ice with few rocky peaks breaking the surface Hellscape—a burning mix of magma, rock, and belching brimstone Maelstrom—swirling, bubbling chaos like Limbo Mountainous—rocky crags, precipitous cliffs, soaring peaks Negative-dominant—major or minor Normal—similar to a Prime plane with various flora and fauna Ocean—a trackless ocean, with a surface Salt—crystalline badlands or desert Sea—of acid, blood, garbage, insects, oil, or worms, etc. Swamp—noisome bog inhabited by predators Undead—specters, spooks, and ghosts Volcanic—lava flows, earthquakes, volcanoes, and smoke Water-dominant—nightmarish creatures in the murk

The Gaping Maw. Demogorgon’s layer in the Abyss is a vast wilderness of savagery and madness known as the Gaping Maw, where even powerful demons go insane with fear. Reflecting Demogorgon’s dual nature, the Gaping Maw consists of a massive primeval continent covered in dense jungle, surrounded by a seemingly endless expanse of ocean and brine flats. The Prince of Demons rules his layer from two serpentine towers, which emerge from a turbid sea. Each tower is topped with an enormous fanged skull. The spires constitute the fortress of Abysm, where few creatures can venture without descending into madness.   Thanatos. Under its black sky, Thanatos is a land of bleak mountains, barren moors, ruined cities, and forests of twisted black trees. Tombs, mausoleums, gravestones, and sarcophagi litter the landscape. Undead swarm across the plane, bursting from their tombs and graves to tear apart any creatures foolish enough to journey here.   The Endless Maze. Baphomet’s layer of the Abyss is a never-ending dungeon, the center of which holds the Horned King’s enormous ziggurat palace. A confusing jumble of crooked hallways and myriad chambers, the palace is surrounded by a mile-wide moat concealing a maddening series of submerged stairs and tunnels leading deeper into the fortress.   The Triple Realm. The Dark Prince Graz’zt rules over the realm of Azzagrat, which encompasses three layers of the Abyss. His seat of power is the fantastic Argent Palace in the city of Zelatar, whose bustling markets and pleasure palaces draw visitors from across the multiverse in search of obscure magical lore and perverse delights. By Graz’zt’s command, the demons of Azzagrat present a veneer of civility and courtly comity. However, the so-called Triple Realm holds as much danger as any other part of the Abyss, and planar visitors can vanish without a trace in its mazelike cities and in forests whose trees have serpents for branches.   Death Dells. Yeenoghu rules a layer of ravines known as Death Dells. Here, creatures must hunt to survive. Even the plants, which must bathe their roots in blood, snare the unwary. Yeenoghu’s servants, helping to sate their master’s hunger as he prowls his kingdom seeking prey, capture creatures from the Material Plane for release in the Gnoll Lord’s realm.

There were myriad types of demons, too numerous to catalog here. Non-demonic life could be found in the Abyss but was most likely imported from other planes.

Remove these ads. Join the Worldbuilders Guild
The Abyss