Marcus is a handsome man who seems to be in his early twenties. The Ventrue Ancillae belongs to the Invictus Covenant and is a Chosen of Clan Ventrue. He is bound by blood and love to his wife, the Daeva Tatjana Sparre, who he met when they both were young mortals. Marcus seems to be a calm man, with little temperament. Some would even state that everything bores him. That's not really true. Marcus just trusts on his wife to do the talking stuff, while he sees himself as responsible for the nasty and bloody fighting stuff. There are only a few things that could enrage him faster than seeing his wife hurt.

In social situations, Marcus prefers to stay in the scene's background, watching the situation and making sure that those dear and close to him are safe. This leads some people to the conclusion that he is stupid, or socially not able to act properly. An underestimation of the Ventrue, which he doesn't like to correct.

The way he looks

"You look amazing, my love!"

Marcus tilted his head and watched his wife. "No," he replied in a coarse voice. "You are the one who looks amazing. As always."

When someone meets him for the first time, they will probably recognize his eyes first. They are gray, very much in the shade of clouds, which are heavy with rain. Only when he smiles or watches his wife, this gray lightens up to the color of a dark silver. He has a straight, sharp nose, high cheekbones and a square chin. A well-groomed, short beard surrounds his mouth with the narrow lips. As his curly hair, the beard features a dark blonde, which is almost light brown.

His skin is pale, with scars and blemishes which show his earlier life as a warrior and fighter. He doesn't seem to smile much, and usually shows off a stony-face, which Tatjana jokingly calls his "Social Face".

On a day-to-day basis, he wears a black woolen shirt with silver buttons, and a black leather pants. He usually combines this outfit with black boots, made of a soft leather. He doesn't wear much jewelry besides his marriage ring and a seal-ring, showing a coat of arms.

If he expects combat to happen, or wants to act as a guardian, he wears a blackened leather armor with silvery rivets on them. His weapon in such situations is a longsword, which looks identical to the one his wife wields in combat.

On fancier events, where he is expected to wear formal clothing, he prefers a white silken shirt and black woolen pants with also black shoes. On wintry days, he combines these with a black and silver woolen coat, usually matching the outfit of his wife. 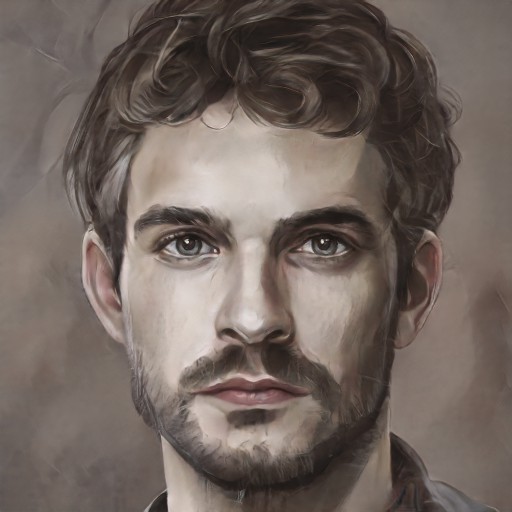