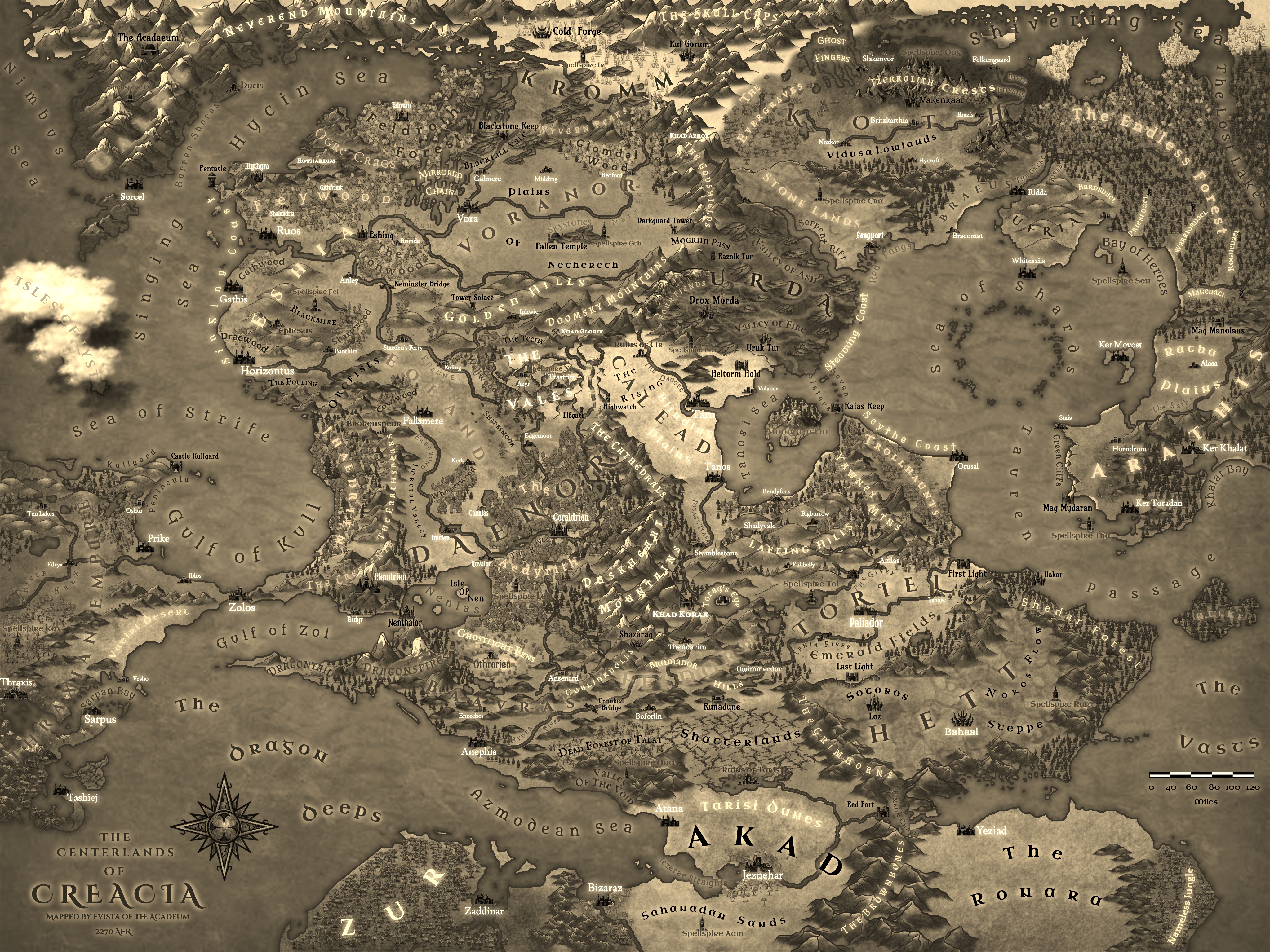 There is a tension at the heart of Creacia, a never-ending tug of war between genesis and destruction, order and chaos, constantly tearing the world apart, only to be rebuilt again. But unlike other worlds where the divisions between opposing forces are broad, unambiguous strokes of creeds and ideals personified by races and nations, everything in Creacia falls on an infinite spectrum, and nothing--neither god nor creature--can be trusted to be as expected.   The Centerlands of Creacia are a culturally, racially and geographically diverse, rich bricolage of crumbling kingdoms and expanding empires, magical metropolises and humble hamlets, farmlands and feral lands, home to a hundred million souls each with their own mortal embodiment of that eternal tension, each asking a slightly different question. They find answers in peace and in war, in magic and in gods, in art and in law, in power and in servitude--but ultimately they find meaning and purpose in their chosen place on their own spectrum of good and evil. It is possible, then, that an Orc proves more noble than an Elf, a Dwarf more generous than a Halfling, a peasant more powerful than a prince.   This tension becomes manifest in Soulveins, magical threads woven since the Womb of the World into certain materials, both living and inanimate, scattered throughout Creacia: into the core of several species of trees, each evincing different aspects of the Fey; through the minerals of certain stones and crystals, evoking the raw and often uncontrollable power of the Arcane; and entwined with the blood of particular individuals, bestowing upon them both terrible curses and blessings of immense potential from the Divine. Although the Acadeum--the foremost center of both magic and science in all Creacia--has sought to understand the true nature of the Soulveins for millennia, the mystery still outweighs what is known, and the gods themselves are left to question.   Some Soulveins are known, objects and artifacts either deified or demonized by different cultures, sought after or shunned, creatures made into kings and heroes or tyrants and villains; but the vast majority, according to the Acadeum, are unknown and perhaps unknowable. Lands such as Daenor embrace the Soulveins as part of the natural, inexorable weave of Creacia; some lands, such as the authoritarian Thraxian Empire, reject them outright as evil and outlaw them as the ultimate stain of corruption; most lands, however, accept what works for their people, their ethos--and their coffers--and reject what does not. Wherever one is, whether one is Human, Elf, Gnome, Tauren, or Tiefling, the Soulveins are ever present, interpenetrating with life, non-life and unlife alike in ways both obvious and obscure.   The Soulveins are epitomized in the myriad forms of the Spellspires, towers spread throughout the Centerlands that act both as portals to one another as well as great magnets for certain energies, some darker, some lighter and some for all that lies between. The Acadeum knows of 16 towers, each named after one of the 16 months of the year, and has studied the intricacies of their use--and uses them often--but can only hypothesize as to who or what created and placed them. Because of the Spellspires’ tendency to drive creatures insane if too long in their presence, the wise peoples of Creacia decided to build their civilizations far removed from the giants of wood, stone, and blood. Found on insurmountable peaks and forgotten islands, in deathly swamps and deep forests, no one knows where the next one will be found, but whoever or whatever finds it will be powerful indeed--if they can survive it...