It spread through Chamberv first, then stippling upward and eastward through the provinces of Aderia and Vernase. For two weeks it subtly infiltrated Beourjen mills and factories, at first no more than an itch underneath the cake of dirt and grime on laborers' skin, slight rashes that seemed akin to the ordinary consequences of working in sordid conditions. 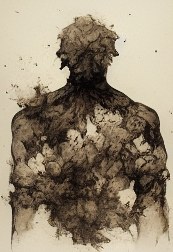 by midjourney
But then it shifted. The rashes hardened, the skin grew littered with poxes, and the itching became unbearable. They ruptured and pussed, as poxes are wont to do, and the remaining skin dried into flakes that brushed gently off like ash from a fire. And then a cycle, again and again, until the paper skin had fallen to reveal the very fat and muscle underneath and every touch stung like the hot end of a stoker.

If one was lucky, their skin would grow back. But in the schools and prisons and poorhouses, often it did not. 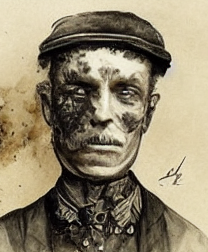 by midjourney
Ashpox was a sickness that spread through Beourjen and Ethana throughout the 1450s, killing nearly half of both nations' urban populations. Both its origin and nature of disease are relatively unknown—it was at first thought be regular pox, however the fact that it spread easily through schools and young children quickly discredited that theory.

It was mostly eradicated by the 1460s—Thm. Doctor Elias Jaquemern was able to develop a tonic with the blood of an infected slighen that would suppress the disease if taken early enough—but pockets of it do occasionally pop up now and then, usually in southern Beourjen and Ethana. Even with the tonic, ashpox can still be harsh for those vulnerable, and sometimes fatal in the case of the very old, starving, or young.

Before Jaquemern's tonic, an individual with ashpox had a seventy percent chance of dying, and the thirty percent who did survive the disease often came away with scarred, pockmarked skin for the remainder of their lives. There is, of course, the underlying factor that many of those who acquired the disease were urban laborers, and so the fact that they often continued to work through the ashpox might've greatly influenced their fatality.

Beourjen City, though it initially hit quickly, was able to quell the spread fairly efficiently. As it attacked the slums first, they simply barricaded the wall between Beourjen South and North and had the soldiers at Fort Brickard deal with any 'disturbances'.
The most common cause of death for those with the disease was from either bleeding out as the skin flaked from one's body or the sheer pain from open fat and muscle to the environment. Especially early on in the initial wave of epidemic, opium was used as the main treatment for ashpox, at least to deal with symptoms, and nearly all who survived then had an ensuing addiction to test their constitution as well.
Type
Infectious disease
Affected Species
common, dwarves, orvon
Onset
3-6 days after exposure
Duration
5-10 days
Causes
miasma?
Prevention
cleanliness?
Treatment
laudanum, Jaquemern's Tonic

Similar as is the case with many other diseases that plague common folk, orvon have a particular resiliance against the perils of ashpox. That's not to say they are immune—many soldiers from Brickard who dealt with the barricading of Beourjen South suffered from ashpox's classic symptoms—but the symptoms are much more mild, and very rarely does ashpox prove fatal for them. Typically, they are affected for the standard amount of time compared to common folk but suffer only mild and mostly superficial symptoms.

Answering: "a condition considered monstrous or "unlucky" by some"
Visit mirescosmo's Competition Page Check all other answers to this prompt Competition Homepage