The temple is a cultural center that exists to preserve the image and idea of the Midillak deity Danamiya. Within the temple are walls of carvings dedicated to her story and a library full of information about her and related Midillak beliefs. The temple does not offer any services to guests and the only people within the temple are those who maintain it or scholars there for long periods of study.

Carved from the trunk of an ancient miana tree, the main structure of the temple is made entirely out of wood and rattan vines. Deeper in, the wooded walls and floor transition into smooth stone as the temple extends into the side of Mt. Hillayiatu .   While the outside of the temple keeps the pure form of the ancient wood, the inside is filled with magnificent carvings painted in bright yet not too garish colors. Many visitors come to appreciate these carvings and learn about the mythology that they depict.

Records tell the story of a group of travelers lost in the dense jungles of Mainland Itzioa. As they began to lose hope of survival, flowers bloomed at their feet and created a path through the thick foliage. Deciding to follow it, they came across what was left of an ancient tree; though it was dead, it had become a foothold for other life. The tree provided them shelter and multiple sources of food. Thinking that the goddess Danamiya had blessed them, they carved an image of her into the trunk. Later, others told stories of how they were led to the tree, each one leaving something as thanks.   Although it is unknown whether these records are true, as the events happened long ago, it is taken as truth. Thus, a tradition of leaving something at the temple has been created whether it be a small carving on the walls or a simple necklace that you hold dear. All who visit the temple hope that one day the goddess will guide them when they are in need just as she had done for those travelers. 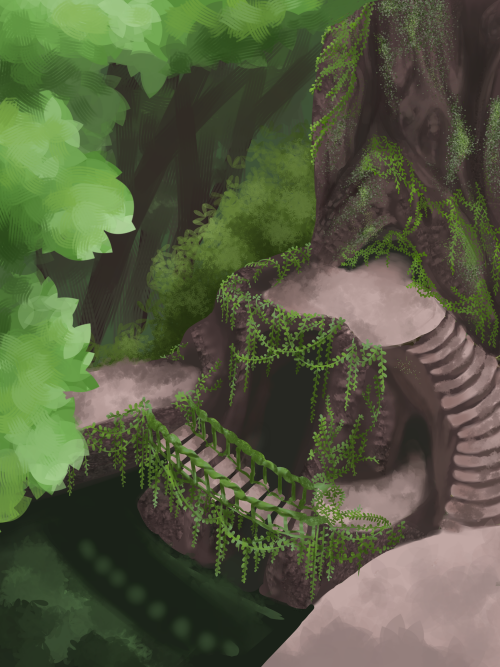 Answering: "Describe the most impressive landmark in your world."
Visit MagpieShrike's Competition Page Check all other answers to this prompt Competition Homepage