"I've rarely met someone as comfortable with their Embrace as Rovisea. Despite the struggles she faces from the condition, her resolve is second to none. Her drive to understand the world, to keep the dark things contained in the Archives, is impressive. Some day, I think we will see her as one of the Grand Archivists, if not one of the Council of Four - though I have no intention of stepping down from my position any time soon."   ~ Grand Archivist Tassam, Council of Four

Rovisea is in decent physical condition, though clearly is of a more academic persuasion. Her condition that has not really changed since her Embrace. She does appear sickly, but it does not seem to affect her general condition and seems to be more of a sign of her greater disease.

Rovisea's body is marred by the Sanguine Embrace. Her body scars in small black lines, her skin is pale, her hair and eyes have shifted to strange colors. Though not easily seen by most, her hands have twisted to claws and she stands digitigrade, more akin to canines than human. She takes steps to lessen the appearance of these attributes around those uncomfortable with them.

It is her eyes that are likely the most striking for most people, but the elongated canines of her smile that bring fear to the hearts of those less educated on her condition.

Due to her condition, Rovisea is keen on wearing clothing that provides ample opportunity to hide the physical changes. She tends to wear soft but dark makeup to flush out her skin a bit. She wears robes or dresses to hide the digitigrade nature of her feet and keeps her hands tucked into a shawl whenever possible.

Much of Rovisea's history is a mystery. She was born at least two centuries ago, and as a young woman she was left at temple gates after contracting the Sanguine Embrace. She does not remember anything of her past, and her name was given to her by the priests of the temple. However, the existence of the woman in their ranks caused some unwanted attention, and Rovisea was cast out. She fled to the Athenaeum in hopes of finding her past and answers about her condition. She came to the service of the Athenaeum Voreios and under the tutelage of Grand Archivist Tassam. Under his tutelage, she worked to discover what she could about the Embrace and her past, and at the same time dedicated herself to the tasks of an Archivist.   Finding no real answers, though, Rovisea has since devoted herself to the Athenaeum - though there was a time where she struggled to come to terms with her disease, and it was believed that she would fall to the same trials that most sufferers did. Roughly a century ago, she almost lost control and vanished into the night. A few members of the Athenaeum were able to track her down, though, fearing that she might lose control and be unleashed on an unsuspecting population. When they found her, however, they found her in full control of her faculties. It was thought that she made a discovery that allowed her to survive the driving madness of the Embrace, but it was not a cure she had found.   While most eventually give in to the condition, Rovisea's need to understand it allowed her to wrest control of the disease and twisted it to her own devices. She did not find a cure, and still suffers from the Embrace as any would. She has taken meticulous notes on the disease though, and through sheer force of will has learned to control it. She takes many precautions to keep her condition under control, all discovered through years of trial and error.   After the Burning of Athenaeum Voreios, she was quick to act. She set up a small base of operations for the members of the Athenaeum that came to investigate the event and its aftermath Veikryss.

Visea is well educated, having trained with the Temple Penitant and the Athenaeum. She likely had an education prior to her Embrace as well, given how naturally she picked up learning again.

She is an Archivist for the Athenaeum and is currently working as the leader of the efforts to investigate the fall of Athenaeum Voreios.

Rovisea is one of the few people to have taken control of the Sanguine Embrace and is seemingly the only one to do so without preying on others.

Like many people who have undergone the Embrace she does not remember her past life and suffers from nearly uncontrollable bouts of rage and hunger.

Like most members of the Athenaeum she holds knowledge in the highest regard and believes it to be paramount to all decisions. Her view of morality is skewed lightly, due to her condition, but she advocates for harming none unless it is necessary.

She eschews close contact with others and avidly avoids the sight of fresh blood, for fear of losing control.

Her current motivations are singular - discover who destroyed the Athenaeum Voreios and why.   Once that is complete, she will likely return to researching the Sanguine Embrace and other dark conditions in hopes of finding cures and answers to her own past.

Rovisea has immaculate hygiene due to her condition. She enjoys baths as both an important part of her continued health, and important meditative action. She tends to wear amber and floral perfumes.

Her time with the Temple Penitant has given her similar views to the organization, though she is not a devoted follower of any religion.

Limited - though her age and general lifestyle have enabled her to save some money. This wealth enabled her to purchase the Voreios Redoubt in Veikryss as a staging area for the Athenaeum members in the area. 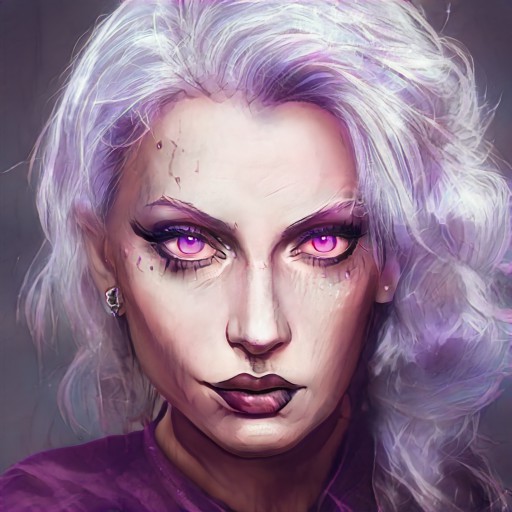