The town build and dedicated to all Guardian's and Arcane practitioners who died in Aya's First Civil War. It is the biggest floating structure of Asmarat, created by Kindred of Valk after the end of Aya's Second Civil War, putting an end to the crusades and witch hunts against the now called Arcanists.

About half of the population is Human, whilst the rest is unevenly divided by Dwarfs, Elfs, Orcs and Lupines. There is also a small percentage of mixed races, such as Half-Elfs and Half-Orcs.

The town is ruled by Astral's Council, previously known as the Guardian Senate before Aya's First Civil War. The Council controls the local laws, regulating how many people and resources come in, and how many go out, since the fastest way up is via teleportation, which is "easy" for experienced Arcanists, but not so much for beginners or normal folk.

The main defensive force of the Guardian's Shrine is their own trained Arcanists, which are seem all across the streets wearing white and golden armor, usually holding lances and automatic crossbows. They are called the Shrine's Keepers, and are a small army composed by roughly seven hundred men.   But do not be misguided, since these soldiers are the best there are, trained in the most powerful of Arcane Arts by Kindred of Valk herself.   Alongside all floating boulders, there are also many small stations where few archers sit on standby in case any airship or balloon trespasses or does a non-authorized maneuver. These archers do not use any bows, but instead, they possess a weird contraption created few years back, which harnesses the power of a energy shot that they produce with Arcane Energy, and them aims and shoots at where the crosshair is pointing. It's energy is increased greatly, generating powerful blows to any enemies daring to come close.

The town is mostly a Safe Haven for any Arcanist looking for shelter, not a working hub. The Council provides free basic food and housing for any of these that can prove their worth, however, the many merchants that come by with their riches and exotic items forced them to create some way to enable money earning by these Arcanists.   They created a small contribution board, where you could help with the cities affairs, such as construction, hunting and others, and them earn currency for it. Although it is a fairly slow-high earning process, it has seemed to work for the past years.

The entire town is built over several clusters of giant floating boulders, giving place to beautiful views from the houses built alongside said rocks. On the inner side of these boulders is located the main city, with all the important stores, trading points, taverns, blacksmiths, etc... There are multiple levels for the town, the highest one being the small castle dedicated to the Council and their families.   The shrine in the center of the city is dedicated to Ragnar, one of the fallen Gods of Order, which is said to be the god that Kindred drew power from to do all she did, and she confirms the story. There are also many more smaller shrines all around the city, for other new, and older gods.

Right after the downfall of the Divine Order, thanks to Kindred of Valk, she decided it would be best to create somewhere in the world where every single Arcanist would be safe from harm's way, and what better place other than the Floating Tower of Astral, right next to the place where it all began.   She extended the floating island's size by adding new boulders to its sides, almost triplicating it's size, and invited several groups of Arcanists and common folk to aid in her project of constructing said haven in exchange of a large treasure for all, and so it was.   After only a few years, most of the work was already complete, and it was already somewhere worthy living. It is kept standing by a ritual that is held by Kindred. As long as she is alive, the city will continue to float, and if she dies, there is a set time where another Arcanist can take place before it starts to fall, however, said practitioner has to bear a honest heart and soul, which would be measured by a test that was constructed by Kindred herself.   The safe haven completed its purpose whilst it wasn't even complete, which was a great landmark for global peace during the period. Said peace still remains, thanks to the same Arcanists that now reside in the city, resting, as they should be after all they've done.   The entirety of the city is now considered a temple of sorts, somewhere where all gods are revered, and all species live together. No conflict. Almost utopia.   Priests from all over the world came to Guardian's Rest only to cast their own types of blessings upon each corner of the city, uniting their beliefs for a better future. This projected a force so great, that a guild was created: The Holy Heart Covenant. Said group is said to have a high-priest from each god, unifying all faith in a single religion. Most of the citizens that live on the floating island are followers of said religion, however, it is mostly limited to the town itself, since it is a fairly new accomplishment. 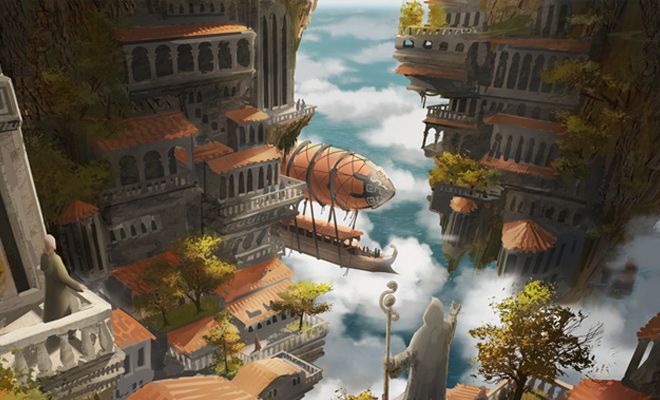