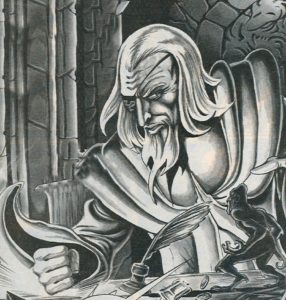 It is said that in the Ancient tongue, Anoria simply means "the world." The continent of Anoria encompasses the known world of humans, dwarves, elves, and other races. It is divided into two main regions, the North and the South, by the wide expanse of the Grey Mountains. While the Seven Kingdoms of the North prosper through trade and rich, fertile farmland, the South suffers under terrible, drought-like conditions, breeding much resentment on the part of the southerners towards their northern neighbors. Many say a war is brewing between the North and the South, helped along by the cult-like Church of Baal which has taken root in the impoverished Southlands like an evil weed. Should a conflict of this scale erupt in Anoria, it would sweep through much of the known world. But there is much of the world yet to be discovered. Or re-discovered...   From the monster infested Skull Coast to the savage barbarians of the Northern Wastes, from the green hell of the Angoran Jungle to the ancient tombs of the Cairn Hills, from the mystical deserts of Ahsaratt to the great, haunted trees of the Wyrwood Forest, Anoria is a continent rife with opportunity for adventure!   So pull up a chair at the Boar's Head Tavern and enjoy a pint. Perhaps you will find a table-dancing dwarf, a fire-breathing gnome, or an elegantly-dressed orc. Or perhaps you will find your destiny...