The story of the winter solstice begins with the death of the god Pronus and the all-consuming grief of his wife, the goddess Losha. She searched for ways to resurrect him, employing the wisdom of her sister Landaga, but only learned that death cannot and must not be avoided, even by the gods. When she finally accepted his fate and performed his funeral rites (entering the longest night of the year), Losha lay herself down to die upon her husband's grave. Landaga begged her sister to return to the
warmth of her hearth, but to no avail. Therefore, Landaga kissed her sister and promised to keep the fire hot through the night, in case she returned home. Losha died upon Pronus's grave, blanketed in snow. The next morning, Pronus was reborn in the East, beginning a new life and his search for Losha, embodied by the spring sun thawing the frozen earth. While their deaths might have been inevitable, so were their rebirths, and therefore the reawakening of the earth in spring.

"With her final goodbye, Losha surrendered herself to what she always knew to be true: death is the

only path to the dawn. And as the long night consumed god, man and beast, Landaga stoked her fire,

preserving a single light in darkest dark. This she did until sun was reborn on the eastern horizon."


The Green Feast is a party on the winter solstice that is meant to last from sunset to sunrise. Many activities and family traditions take place over the course of the evening, but above 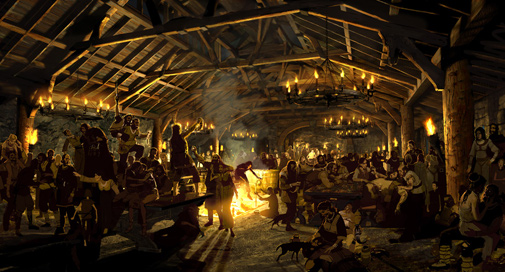 Meade Hall by Norm Newberry
all else, the fire must remain burning until dawn. The feast is usually thrown either by a single household, or by a larger community such as a village or a neighborhood. The tradition is essentially Praverian, but winter solstice practices across the continent often include similar feasts. Though the celebration is jovial, it serves as a warden against evil spirits whose powers are believed to be greater on the longest night of the year.

At sunset on solstice night, families and communities gather outside of their dwellings and sing laments for Pronus and Losha. During this solemn ritual, lendel wreaths are hung on the east-facing side of the home's exterior. When the sun finally sets, everyone in attendance lights a candle and processes inside to light the hearth fire, now singing songs of hope and renewal. When the fire is lit and the final song sung, the Green Feast begins.


Either in a household or within a larger community, a selection of unmarried youths wear grotesque leather, wooden, or bone masks and “taunt” people into adding “goodies” to their sack. These goodies are usually gifted to the host of the feast, who then re-distributes them to the children and elderly (or sometimes to the neighboring poor who cannot afford the feast).

It is seen as a bad omen for a person if they do not or can not contribute to the imps’ sack. The imps wear spiny twig-covered costumes while cackling, banging on drums, and wailing on pipes. It is believed that they scare away the evil spirits that thrive on the winter solstice.


Mistletoe is hung from the chandelier (or over the feasting table) to bless those attending the event with fertility and renewal. Due to the plant's ability to grow even from dead matter, its mere presence is believed to emanate powerful energies that aid in diplomacy, illness, and sterility.

Holly is hung over the entrance to the home or arched over the entire entryway, as well as the windows. This is believed to literally protect those inside the dwelling from the elements outside (known to be particularly violent around the solstice). It also serves as a ward against evil spirits.

Pine (often from fur trees) is fashioned into crowns and worn by the hosts of the feast to both label them as providers of life in the winter, as well as to bless them with the favor of the gods (who are often depicted wearing or carrying evergreens) in the year to come. 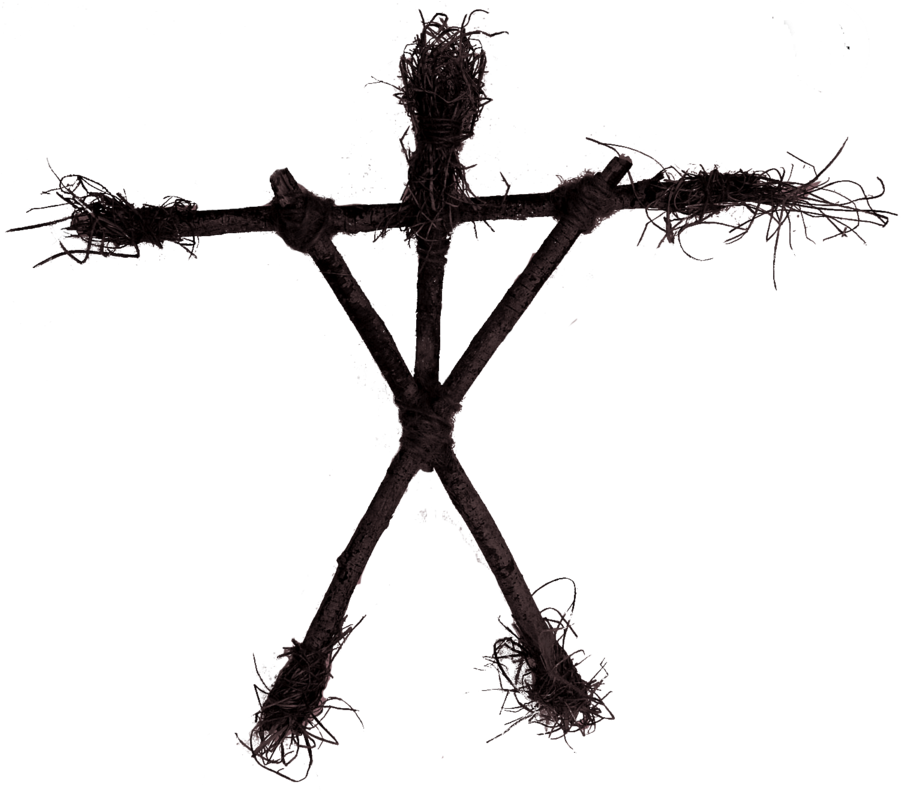 Public Domain
Large wreaths are formed out of local pine bows, made as big as deemed necessary. Hand-sized figurines made of twigs and sticks are created to represent every loved one that has been lost (dead or literally lost) over the year. Tokens belonging to a given individual are woven or tied around their effigy before all of the figurines are bound to the wreath, as evenly spaced as possible. The wreath is then hung on an exterior east-facing wall of the structure. It is believed that the light from Pronus's rebirth can guide wayward spirits back into the cycle.


Before the children go to bed (who are not encouraged to stay up until dawn), ghost stories are told by a bard or an elder, who casts shadow images on the wall with a candle and stenciled

The Storyteller by Andrew Finnie
wooden cut-outs, accompanied by skillfully shaped pipe smoke. Wealthier houses dod this with a rotating metal lantern device that revolves around a single candle. There are over a dozen ghost stories traditionally told on or near the holiday due to its association with the evil spirits of the winter solstice. Children then huddle together in bed, fearing and contemplating the darkness of the night rather than the arrival of a jolly old man. If nothing else, children learn the importance of family, shelter, and the hearth.

Big game meat is roasted and eaten by the upper-classes (accessible only to those who can afford to purchase the meat, or to the nobles who actually own the land from which it was hunted). These roasts are flavored with expensive spices (cinnamon, ginger, star anise, etc.) and often decorated or paired with fruit chutneys and compotes.


Large meat pies are the featured dish among the poorer classes, consisting of a mixture of 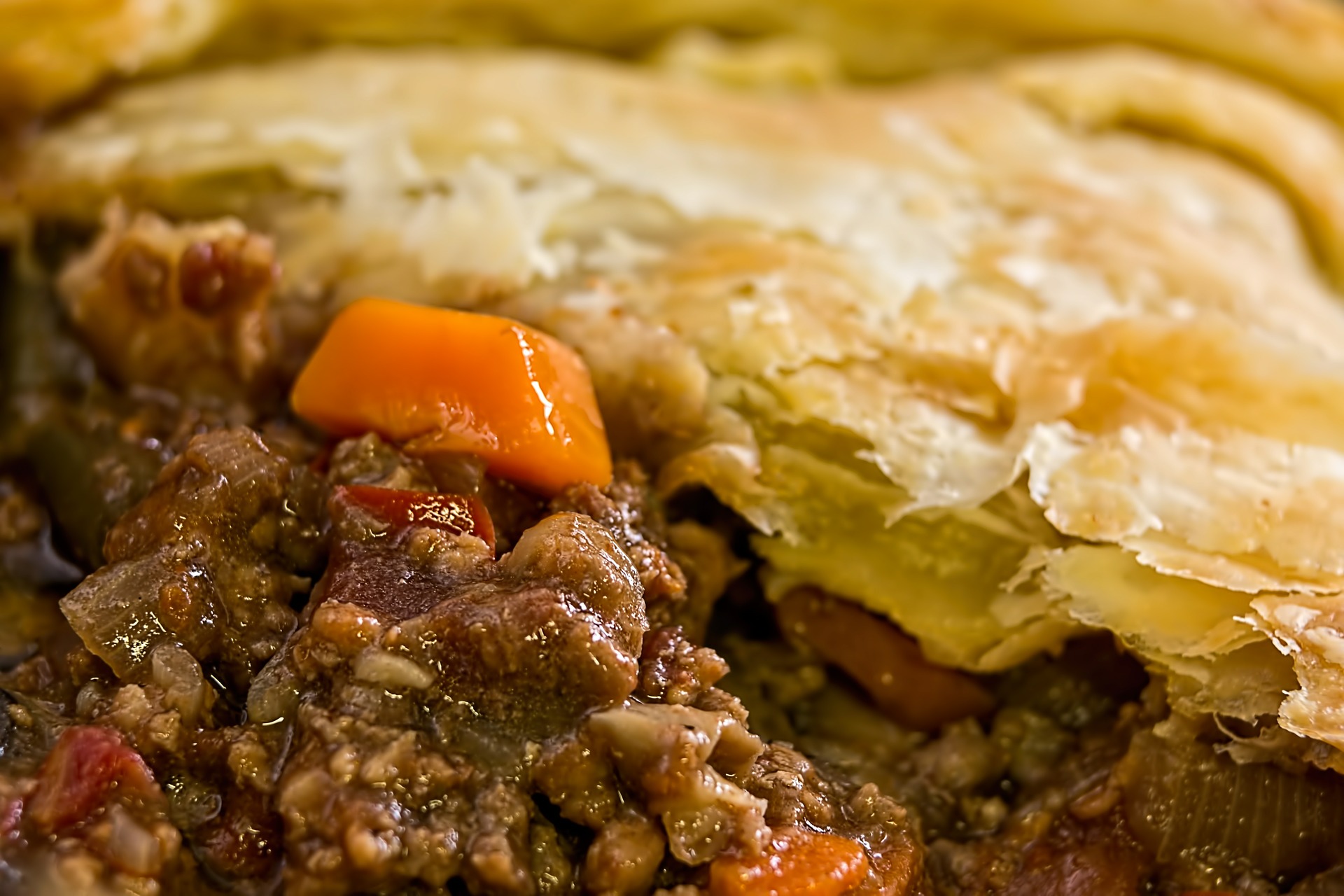 Public Domain
ground-up meat scraps cooked with dried fruit, nuts, and sometimes various roots vegetables. The pastry “lids” of these pies are often decorated with images from the old stories, or of holly, mistletoe, or pine. Wealthier tables tend to serve lallopies as well, just not as the featured meat dish. In coastal Praverian cultures, fish pies (sometimes containing other seafood) are prepared and also called lallopies.


Sheep’s Brain that's been pickled for at least a week (with spices like star anise, cinnamon, peppercorns, etc. for those who could afford them), then poached or braised and served in thin slices with onions and mustard. This dish was originally a method applied to game meat as a way to make organs like the brain more palatable. As the dish became a traditional staple at celebrations like the Green Feast, wild animals were replaced by more-accessible sheep. 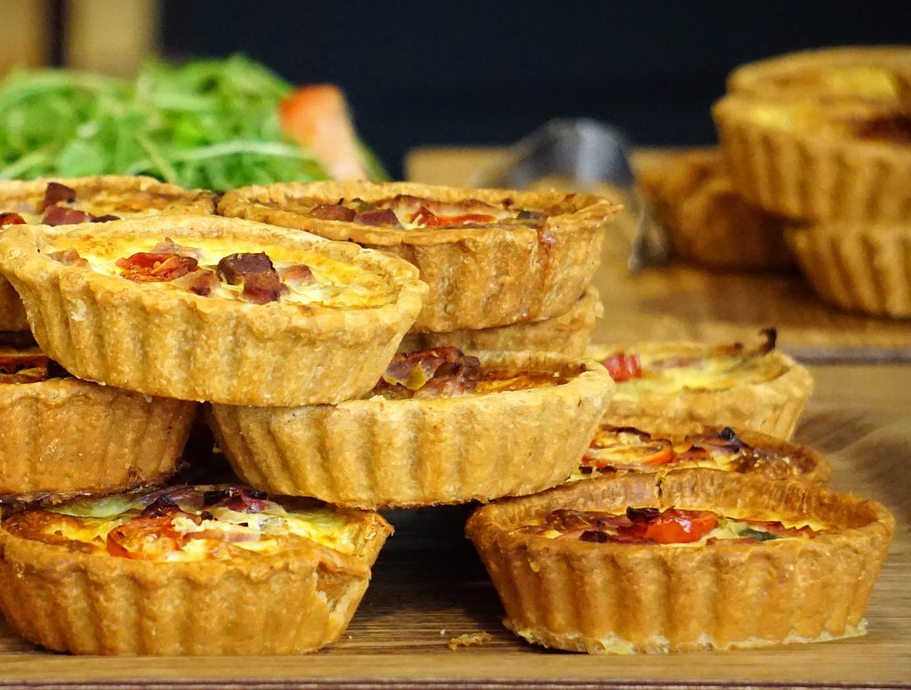 Public Domain
can vary somewhat from region to region, but almost always consist of mushrooms, local cheese, and a dried fruit. Popular additions include truffles, nuts, honeycomb, or even caviar in coastal regions. These are a popular "goodie" to wrap and put into the sacks of the cacophonous Fallow Imps.

To accompany the delicacies above, it is common to also serve loaves of (dark) bread, wheels of common local cheese, boiled and salted potatoes, boiled eggs (sometimes with the yolks dressed up and spooned back onto the whites), various pickled fruits and vegetables, and salted fish.

Coastal regions also accompany the feast with a simply-treated spread of freshly-caught seafood like mussels, squid, oysters, scallops, and more (often served raw with a sprinkling of citrus, vinegar, or pickling liquid).

Competition Homepage
In response to the prompt How does a culture in your world celebrate the winter solstice?

Very enjoyable read! I will have to take a look at more of your work! The layout of the page is great, and breaks the information up into easy to digest pieces.   -Cheers friend!