And the mightiest of the Creator's wing-ed children numbered twelve and one; and the thirteenth was greater and more beloved than his brothers and sisters.

Though there are countless astrals in the heavens, twelve of them are worshipped as the greatest of the angelic beings and serve (according to Creator Astralism) as the Creator's messengers. Each astral holds office over a divine virtue.   There is a thirteenth considered to be greater in strength than the others; however, Ahriman is considered an outlier due to his status as a "fallen astral". Both major sects of Astralianism teach that Ahriman twisted the hearts and minds of the chimera and caused their downfall. His evil influence is also responsible for all vices that plague mankind. But, this wasn't always the case. Before Ahriman turned from the Creator, he, like his kin, held dominion over a virtue.   All thirteen great astrals and their virtues are:   Suriel - Silence
Semyaza - Temperance
Azra - Order
Addelum - Resolution
Verchiel - Frugality
Voamanah - Perseverance
Dardariel - Sincerity
Yofiel - Tranquility
Sizouze - Patience
Micah - Humility
Aster - Innocence
Ophanim - Hospitality
Ahriman - Justice   Since Ahriman's betrayal, he is known to be the astral over all vices that corrupt the hearts of mortals (despair), and his anger (malice) is considered to be the driving force behind fiends and demons. Where he once held dominion over the virtue of justice, the exact dominion of sin he now lords over is debateable. Most imperials would say it's either lust or greed, whereas Nasirians would say it's gluttony or pride. But some rebel chimeras that fight for freedom and equality would say without hesitance that Ahriman is the astral of pure, unbridled wrath...   According to Astralian lore, Azra, the astral of order, is considered to be Ahriman's rival. 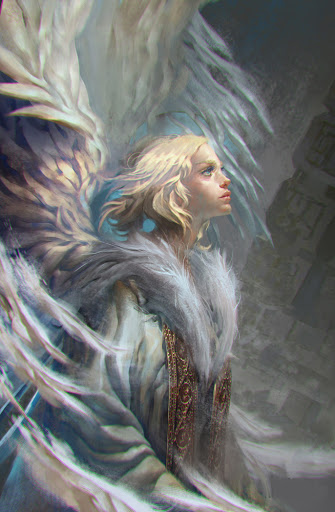