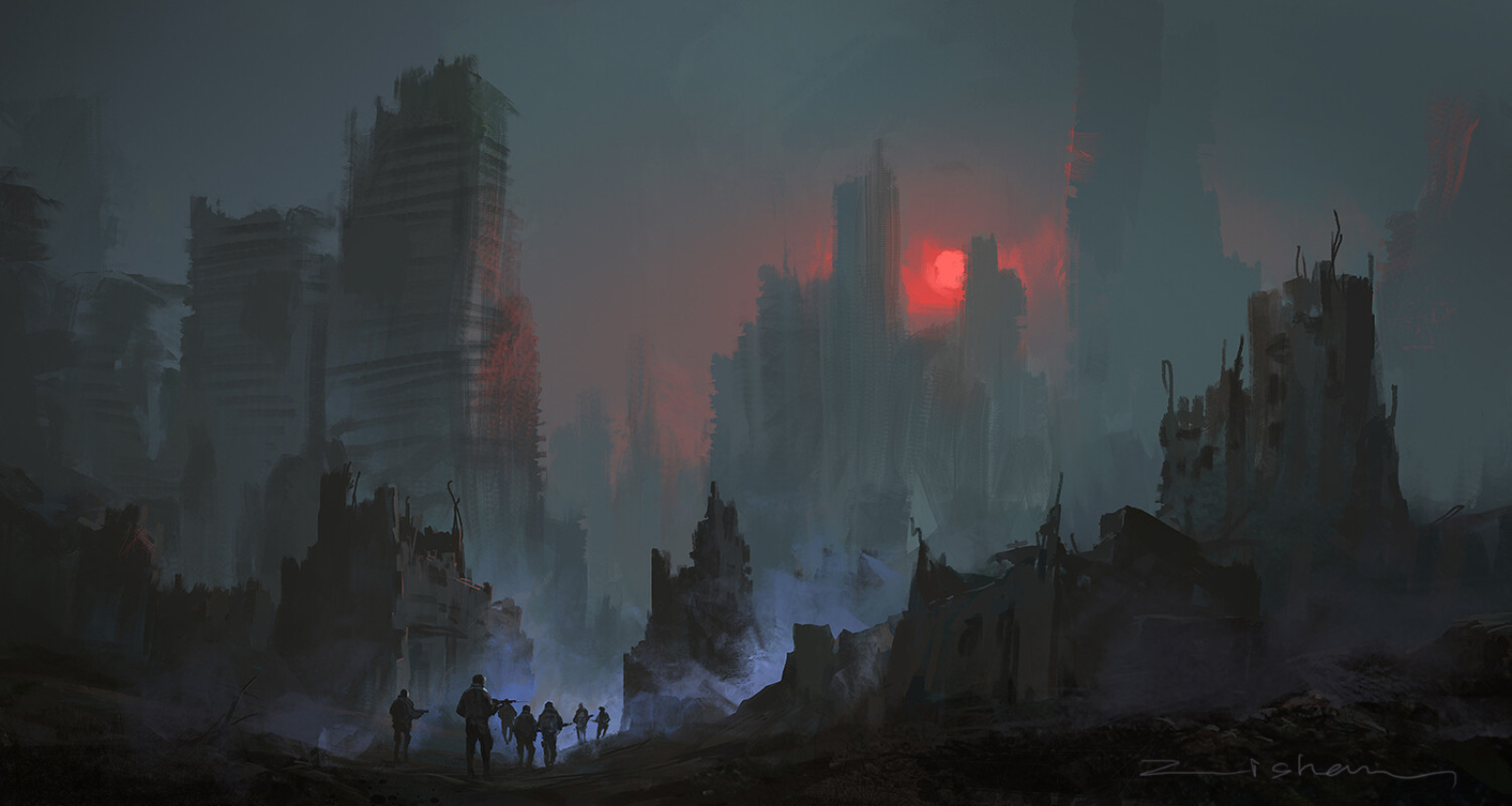 Leonard felt the rage building. He longed for the cold joy only vengence could grant him. He raised the pistol and aimed it at the silieu ambassador. “My daughter was on that ship," he cried. "The Phoenix was under her command. I watched the flash as it lit up the night. To hell with your approval. We are here. We will be heard. We will have our way." He pulled the trigger, but like all the nights before, he woke before he could see the bastard die. As if the universe itself denied him, catharsis remained just beyond his reach.
Dr. Leanard Kines woke to the same metal ceiling, the same bland room, and the same gaping hole in his very being, a place his daughter once filled. Caydie was the only thing he could say he was proud of. Since her death, life just wasn't worth living.
He turned his head to his wife, who stared back with a look of concern. “Sorry,” he said, rubbing the sleep from his eyes. “Did I wake you?”
She shook her head. “I’ve been up for an hour or so. Same dream?”
He noticed her hand placed suspiciously close to his. He longed to hold it, but knew indulging such things would only lead to further problems. He smiled, nodded, and let his finger brush against her hand, before sitting up.
The sensation was both calming and painful. He felt the shared love between them, but he also felt as if every tiny particle in his skin snared and snagged on hers, despite how soft her skin was. It felt brushing against sandpaper.
He stood up and walked to the nearby window. He stared at the deserted buildings making up the planet wide city. They towered over the people below, each walking with purpose as they hauled materials, operated tools, and continued their efforts in making this strange world a proper home.

The Three Colonies take up a forty square kilometer region of Safeharbor. The region has three settlements: Juliet, Dawn, and Autumn. Collectively the population ranges around 10,000, all of which are human. The region is nestled in the ruins of a city. Safeharbor is an ecumenopolis, a planet wide city. While much of the planet has been reclaimed by nature, large sections of the city still stand. Humans use these structures as homes and for protection. The buildings surround the settlements like a wall, keeping much of the wildlife on Safeharbor outside.   This region marks the extent of humanities influence over the planet. Past this region, the planet is mostly unexplored. Homebound, an organization of Wayfarers, make it their mission to venture further and expand humanities control. Even within this region, control isn't quite the best word to use.   The settlements remain walled off, and protected, but the roads between them are filled with obstructions, hostile fauna, and unstable structures. It's not uncommon for those living in the colonies to feel a rumbling underfoot. They turn to search for the source, and spot towers crumbling under their own weight, no longer able to scrape the sky. Every time this happens, it displaces wildlife, creates obstacles for those traveling between the colonies, and potentially threatens lives if it happens near the colonies, themselves.

Most agree that Safeharbor's climate varied relative to location, like any other planet. After the planet was transformed into an ecumenipolis, however, it altered the climate dramatically. The entire planet has less variation in its current state. It is still colder toward the poles, but due to the many structures, deserts are nonexistent, and regions that should be tropical are far closer to temperate. There are no arid climates, nor boreal climates.   The average temperature across the planet rests at a brisk 20-25 degrees Celsius (68-77 degrees Fahrenheit), gradually getting colder toward the poles with an average temperature of 8-15 degrees Celsius, (46.4-59 degrees Fahrenheit) Rainfall is common, particularly in the spring and fall, though the average temperatures are consistent year round, making the change in seasons difficult to catch. In The Three Colonies, the average rainfall per year rests over 68 inches, 173 cm.   It is believed that there is some kind of weather control technology keeping the planet's climate stable. It is believed to be hidden somewhere on Safeharbor, though no one has found where it could be. The evidence is there, but no method for detecting has been discovered. The Archivist of Safeharbor believes it would exist somewhere along the equator.

The surface of the planet is but one of many layers. Facilities, tunnels, and more exist underground. Entrances to the depths are sealed off in The Three Colonies, and access is heavily restricted. The predators lurking below are more than enough to justify it. The Wayfarers delve below routinely. They search for valuable materials and technology that can assist those on the surface.   These technologies are kept safe from the elements down below. The concept of beam weaponry was discovered in one expedition, as was the entirety of Caydie's Cradle, a series of dry docks allowing for the production of ships.   The depths of Safeharbor also offered shelter to civilians during The Battle of The Pillars . Enemy fleets destroyed in orbit sent debris crashing down to the surface. Several bunkers were discovered and protected the population until the battle was over, one becoming the location of our third colony, Dawn.
Safeharbor
Season 1: Us
Juliet
Join The Void Between Discord!
Cover image: by Adobe Stock (Zishan Liu)

Woah. What a warm place to live, probably too warm for me unless I lived on the poles of the planet. The idea of an unidentified object being the source of heat for the planet is pretty cool, and I like the mention of the Archivist as there's no article for it yet.   Your world is well woven together right now, so it feels like a small yet infinitely large world at this point. It's a super interesting thing to ponder, and, presumably, it's a result of a focus on the base of your world during World Ember.   Also, I still can't get over how gorgeous your CSS is. It's super cool and the only critique I could make would be that some of your crazy sci-fi fonts are hard to read. Keep up the good work this World Ember!

Yeahhh trying to get the audio down for the archivist article. A puzzle as well. Soon though. I'm definitely aiming for that feel and I'm glad it comes through.   The scifi fonts can be a problem here and there. Some characters make the word difficult. Oof. But I love it so much! Thanks so much, as always.

My first thought when you said "It's not uncommon for those living in the colonies to feel a rumbling underfoot, turn to search for the source, and spot towers that scrape the sky crumbling under their own weight." was that there was a dune-style earthworm regularly consuming structures around the planet. Of course, that's very probably not what you meant, but it is now my headcanon that there are giant worms lurking in the tunnels beneath Safeharbor.   I like how, even though this is primarily a setting about exploring other planets, Safeharbor is still a great setting for potentially limitless adventures. Scouring the planet for ancient technologies probably employs a good chunk of wayfarers.

To be fair, some creatures actually do cause these buildings to fall, so headcanon approved. I definitely want to work on the fauna soon. Ooooo yes it does. It makes things so much bigger in scope. It makes humanity soooooo small.

The idea of a planetwide city is kind of epic. I can see there are a lot of mysteries left on Safeharbor. I love that the humans are using the ruins of the city to protect themselves from the planet at large.

The place sounds really cool, though I must admit I'm a bit confused. At times the article talks about these three cities and the whole planet as interchangeable. For example, the climate section mostly talks about the whole planet (Safeharbor). Yet the region of these three cities is only 40sq km... Is it a really small planet?   Please note that I am not well acquainted with sci-fi, so I may be missing something basic. If so, my apologies.

No worries! The main reason I chose to do that is technically these colonies are all located in the same city. Because Safeharbor is an ecumenopolis, they never leave this city. The entire planet features the same climate with small variations, which is why it talks about the planet as a whole. I'll try to adjust it a little bit and make that less confusing. My apologies! Thanks so much for taking the time!

I love how you weave details from other articles and history into each article so smoothly! Safeharbor sounds like a good home for humanity since they no longer have Earth... But I would not want to meet the predators that lurk in the depths underneath the colonies!