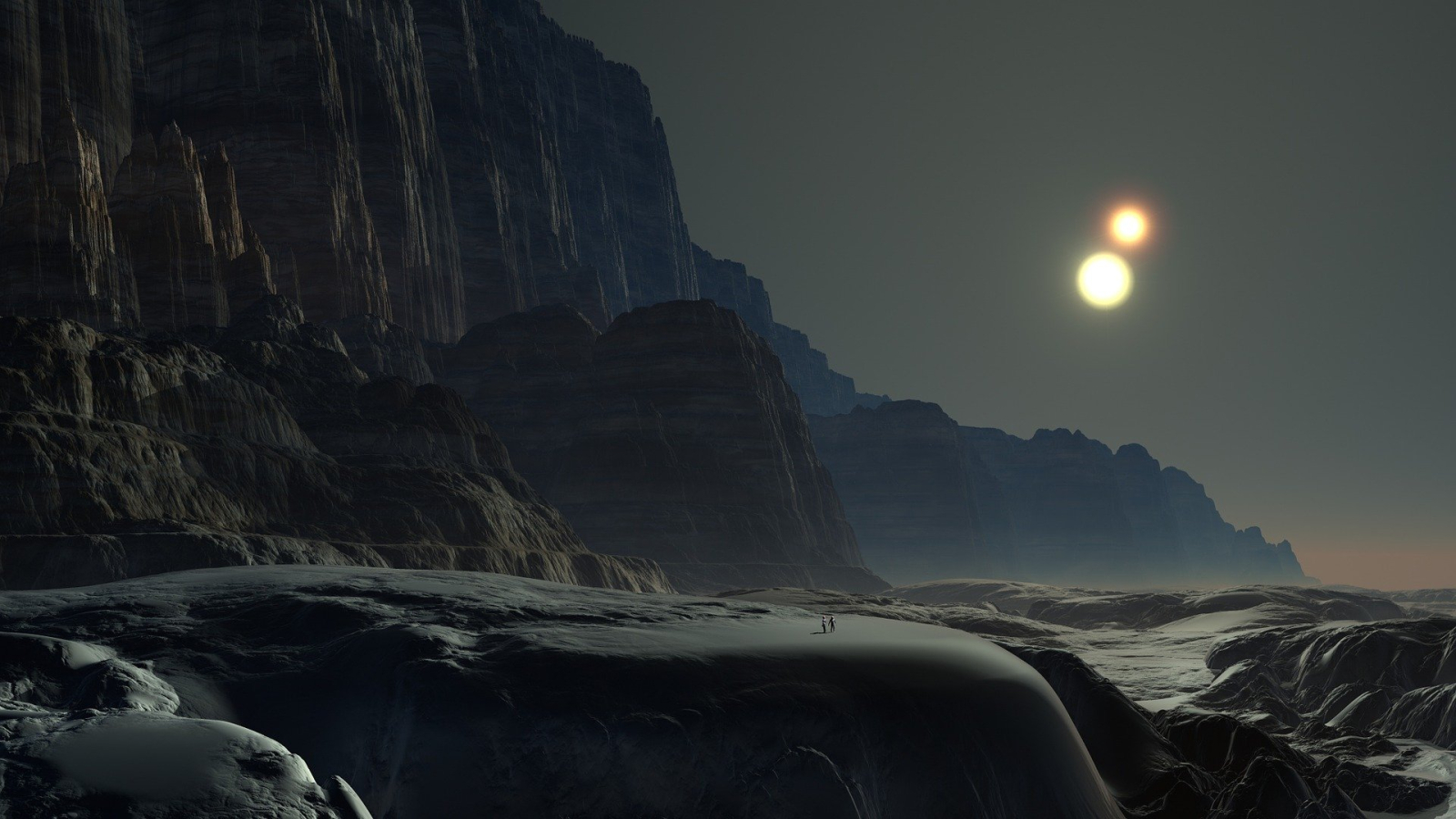 We aren't the only ones, you know. Many have touched these distant stars. The galactic community tends to avoid our section of the galaxy. They lack the star charts needed to navigate it. Its unknown terrors are more than enough to discourage them. Our Wayfarers are different. They see not the infinite void, but the flickers of light fretted within it.   We discovered something new. I’ve just been given a wealth of data gathered in an expedition to Holv-453. The planet was lifeless and barren, save for a single structure built atop a mesa near the southern pole of the planet.   We’ve stumbled on these structures before, but their nature eluded us for quite some time. These massive bunkers were built to protect the dead of some lost civilization. They may be empty, cold, and lonely, but the dead are not as silent as it would seem. Let us speak of the Thought Graves.

A Thought Grave is part military bunker, and part graveyard. The species that built them intended for them to stand indefinitely. Millions, perhaps hundreds of millions of years, have passed since this race died off. During my studies, it seemed impossible to truly understand their purpose. Why build something to keep troops alive and fill it with their lifeless bodies?   Each structure is unique in its layout and composition. They are always made from stone and metal, camouflaged in local rock formations. They can appear on any world. We’ve found them on wastelands as often as we’ve found them lingering on planets teeming with life. They can stand nearly a hundred meters tall and just as wide, but there is so much more hidden behind what you can see.   Within each Thought Grave are perfectly structured rooms, filled with strange metal coffins. Each room is built in complex geometric shapes. This is likely a religious practice, similar to how we built our cathedrals on earth. The rooms are connected by halls that weave deep beneath the planet's surface. Until now, that’s all we knew about them.

With this data lies an answer to the most pressing question. These installations are well armed and easily defended. They possess factories, armories, and living quarters. What’s strange to me is the presence of the coffins. I once believed that it could only mean one thing: perhaps their religion focuses on ancestry and warfare. They keep their soldiers close to aid them in battle.   I was wrong. I love it when I’m wrong. It's a delightful change of pace. We have never been able to open the coffins in the past, but this has changed. I’ve scoured the data. Two things stood out to me: First, each coffin features some kind of interface, implying connection to a power source. Second, each coffin is connected to an intricate network of pipes that seems solely placed for the coffins themselves.   My friend, If my theory is correct, then they were not trying to honor their dead, nor did they wish to keep the spirits of the fallen with them in battle. Within the plumbing of the complex, there exists traces of dimethyl sulfoxide, a common cryopreservative. They were refusing to let their warriors die.

Thought Graves are never so well-preserved. Most of the time we stumble on little more than rubble. Even in this case, many of the coffins had little more than dust inside them. When wayfarers entered the complex, something activated within in. One of the coffins opened and the wayfarers were attacked by the creature that slumped within it.   No one was injured. It was unarmed, and It died very soon afterwards from a gunshot wound it sustained before being preserved. The process was never meant to be reversed. They were to be suspended indefinitely, the wounds they suffered, or their health being far too taxing to live for long after their revival. Remove any of these proud warriors from their coffin, and they will die, terrified and alone.   Then we must consider the connection between them. It’s obvious they would need a power source, but each coffin is linked by seemingly redundant connections. Again, I have a theory. This took so much in the way of resources, and for what? Why go through all this trouble? Why preserve them and not just let them die?

Each coffin is linked to fuse the warriors into a single entity. Their brains would be inactive, their personality unable to add to a collective, so it can't be a hive mind. The purpose of this link would be to harvest their skills.   Imagine all of humanity's greatest warriors, and the ability to pass on their skills. Perhaps they did so to create more realistic, or challenging simulations for new recruits. This is possible, but I like to think big. This was not a training facility. This was a military base. It’s a fortress. I don't think the training is meant for the soldiers, at all.   There is one final piece of data that I’ve found. Deep in the heart of the facility lies a strange device. The images on the drives, the data collected, all suggest the same thing. These looked like servers, a mechanism located at the center of the room that looked to be the brain of sophisticated artificial intelligence. They were teaching a machine the art of war.

This would mean each entity has a name, an identity. Each one collects the skills and experience of the soldiers, learns from them, and develops independently of the others. It would effectively create an entire entourage of military genius.   These entities commanded the entire war machine of the species that built them. Each had a preference. Some favored ground combat, others favored naval warfare, and so on. They likely possessed their own personality, their own eccentricities.   This level of technology is incredibly sophisticated. It’s hard to imagine how such a race died out. It’s possible the grave-minds wiped them out, then went dormant. We know of fifteen of these bunkers. I’d hate to see what would happen if they woke up.
The Others (Under Construction)
Cover image: by Reimund Bertrams from Pixabay

So Cryonics is a little studied field, mainly due its controversial status in the scientific community. There were surprisingly few articles I could find on the subject, but while many consider it pseudoscience, others are making progress. I wish I could provide some interesting research beyond this, but sadly, its just not there, or it isn't quite possible.

Ooh. This has an interesting design as this is the first article without a sidebar that you've made in this world. I like it. I don't have much to say about the actual article other than it's awesome. I'd especially love to see what might happen if one of these machines were to wake up and what devastation that would reap upon humanity. However, I do have one major question that's only tangentially related to the article: what the heck are you doing that makes your article URLs mess up following your publications and notification of the article? The last two articles' notification links haven't worked--well, one did but upon refresh had broken--so I've had to manually locate them. Keep up the great work!

Hmmm.... well we did have some problems on WA last night but, I'm not sure. It may be slight changes to article name, which I believe automatically updates the url. Thanks for telling me that cause I didn't know!

This is such a fascinating concept, and even chilling in some ways. I loved reading through this article of yours! It was amazing :)

Thanks so much, my friend!

Let's hope these things never wake up. What a terrifying concept. I love the way the Archivist narrates this article, especially the line - 'I love it when I'm wrong.' Gave me shivers for some reason.   I second Jac - I've been redirected to the homepage when I click on your articles from the notification. I think if you change the article title/link after notifying it breaks it. XD

Thanks so much! I'm glad the narration works well. For sure, its terrifying to realize this could just wake up at some point. Oof. Also yeah. I added "the" to the title on this one XD. Pretty sure it broke

The way the wounded or almost dead can add a values to their community is marvelous. I could imagine that such AI-s would cause a great havoc, especially if they could connect. Is it known if there were connections between the Gravemind Generals to form a Gravemind War Council of sorts?

Sadly, or perhaps fortunately, not. The generals are too spread out to communicate. The species that developed them never gained faster-than-light communication, so any links between them could travel for decades, centuries in some cases, to reach their destination. That's one advantage. If one wakes up, at least itl be alone.

Also thanks so much! I really liked this idea.

Veeery interesting. It seems like every article I read gives me a new theory on the disappearance of earth. Every mysterious alien race makes me think "hmm... is this just unrecognizable far-future humans?" It's the same with these warriors in the thoughtgraves. I do find it unlikely, since you would probably recognize them if you yourself were a human, but you never know...