The largest river in Kweil and home to the beating heart of the Melopian Commonwealth.

Melior    Regions    Melopia      Kweil      River Cáruc
The Cáruc is the ever-flowing lifesource of Kweil and is the largest river in the country. Its banks are home to diverse gatherings of tropical fauna and flora, and is most famously the birthplace of the Melopian Commonwealth.
Idura, the industrial capital, is illuminated throughout the night with modern glowtech. Its strategic position holds control of the river mouth and attracts traders to its strange Floating Bones Market.

Rainfall trickles down from the modest mountains into the many tributaries that feed into the Cáruc basin. Its rich, silt-laden waters are carried downstream to nourish the fertile lowlands until the river mouth greets the sea, known locally as The Tradewaters.

The tropical savanna climate in Kweil makes the perfect growing conditions for some of the island's largest crop exports.

A patchwork of soybean fields cloak the banks of the river Cáruk, whilst many coffee fields and sugarcane plantations bask in the hilly elevations of the land.

River crabs and speckled longfish are a popular food staple for Kweilite folk, but fishing for them upstream in the untamed wilds is dangerous.

Large cats silently roam the forests and colossal caimans lurk beneath the surface - both feast like kings upon the unsuspecting buffalo and antelope herds that gather at the rivers edge to drink. 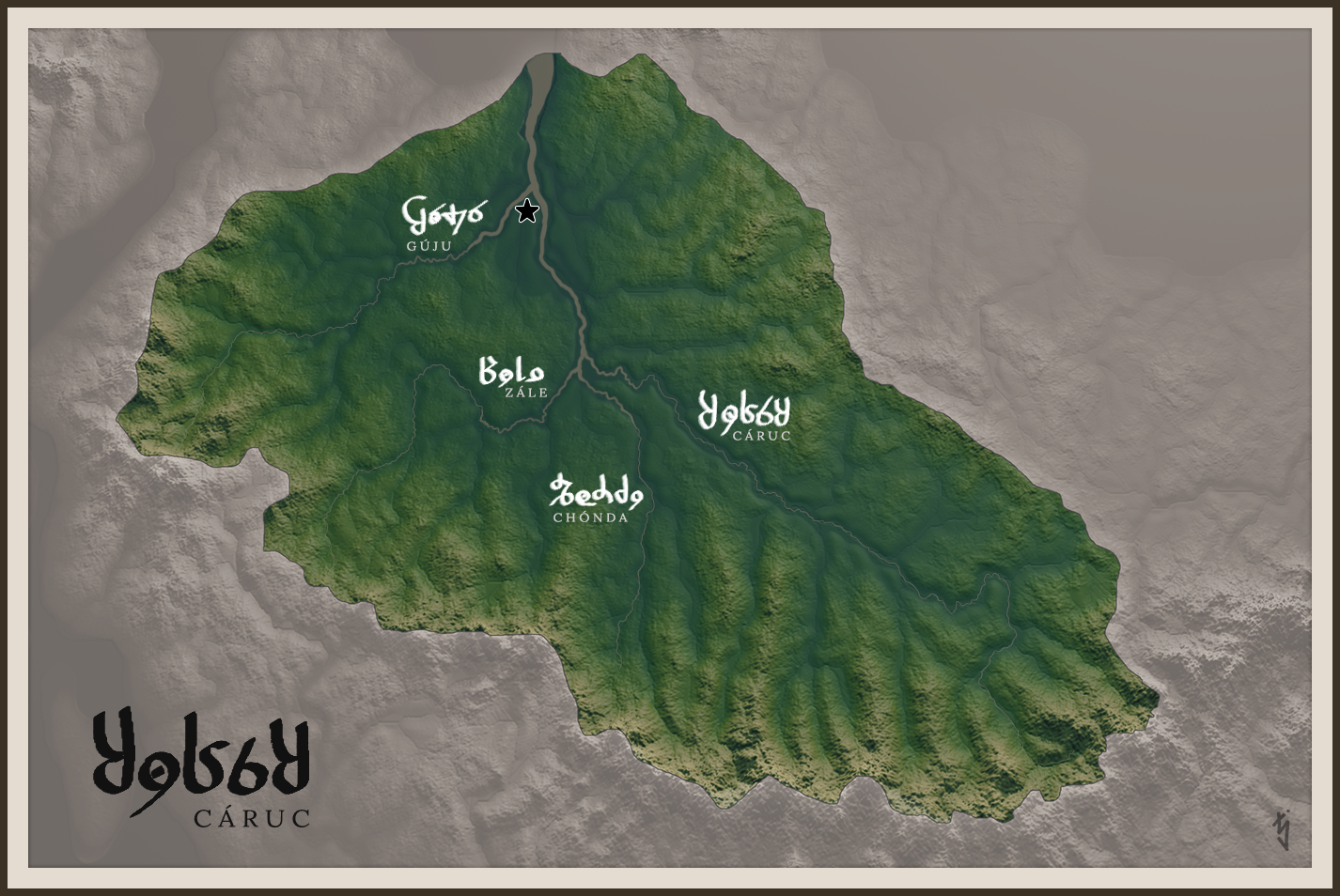 Idura is an extension of The Cáruc. We continue its flow out into The Tradewaters and across the seas to Orubia, Melopia, and the rest of the Commonwealth.
— Common Kweilite knowledge 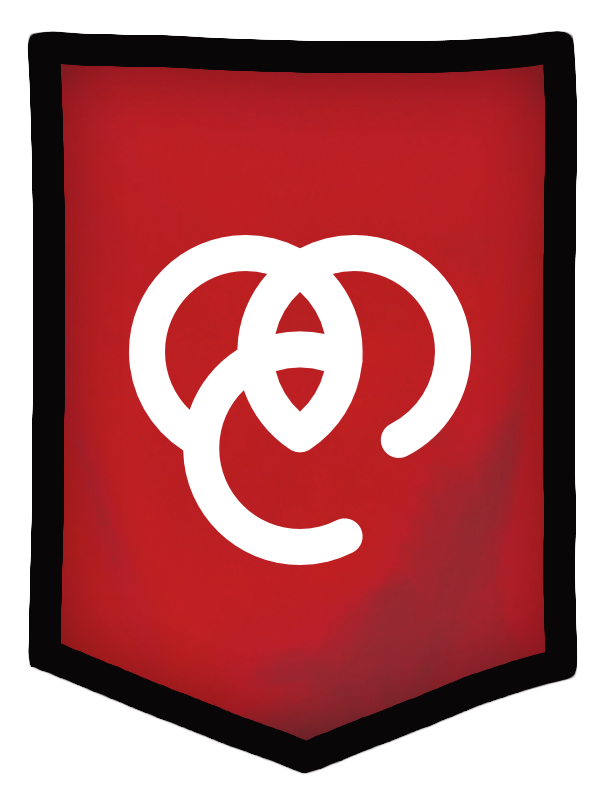 by TJ Trewin
The earliest settlers along the Cáruc lived around 1000 years ago in the age of The Unknown, though only a few pieces of evidence support this theory. Most folk believe that, much like the river itself, Idura has always been, and always will be.

Many settlements have grown along the banks of the Cáruc and its tributaries, but the most famous of all is the capital city, Idura, situated in the auric-west of Kweil.

The city has stood the test of time due to its strategic positioning and access to flat, fertile land. Idura fortress was constructed between the broad Cáruc, and its second largest tributary coming from the west, The Gúju. Looking directly aurward to where the mouth meets the sea, the fortress can see threats arriving from many miles away before they even enter freshwater territories.

Having such a large and central position provides access to the city easy for large trading vessels. Idurans make huge profits by taxing ships to go further upstream for more trade.

Impact of The Rupture

Trade boomed and ships sailed freely in and out of Idura as frequently as the tide rose and fell.
That all changed about 50 years ago when The Rupture wrought devastation across Melior and opened planes to foreign realms.

With the sudden and forceful introduction of magic into the world, the destruction on a global scale halted all trade as folks focussed their resources on defending against the invasion of magic-using horrors.

Today, industry has recovered and is going through awe-inspiring changes as folks learn about their newfound magic and the application of it to technology.

Maisha-rich crops that provide the source of magic nutrients are in huge demand, and farmers are cultivating new hybrid variants of coffee plants and other popular exports.

The increase in working hours has benefited the Glow-Jelly industry massively, and jelly trawlers work around the clock along Orubian shores to haul in large nets of the bioluminescent jellyfish that used to create this safe and reliable light-source. The available lighting, thirst for knowledge, and race for magical prowess has fuelled industry along the Cáruc into an unstoppable force. 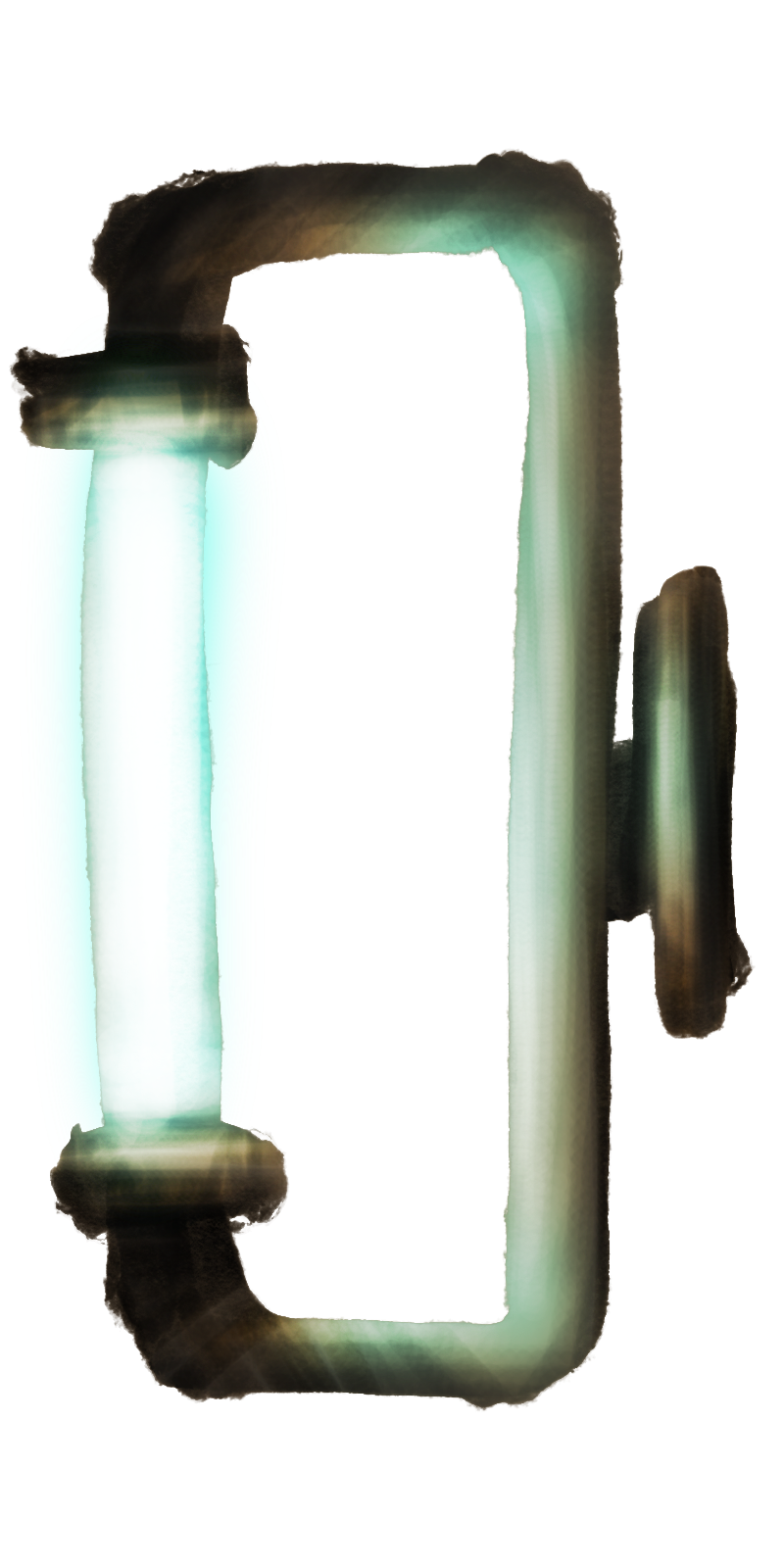 Another growing industry on the river Cáruc is the bizarre bazaar known as the Floating Bones Market. In the years that followed the Rupture, many huge bones were brought back to Idura as trophies (locally called "triumphs") as a display of overcoming the invasions of chaos.

Traders along the canals in the city began to adorn their boats and stalls with these strange bones, and many carved into them to use for decoration and signage. Over time, the floating markets became so packed with bones that the name stuck, and when travellers came expecting the bones to be for sale - well, the new demand manifested it immediately! Every boat, stall, and raft now sells an assortment of bone related items.

Fresh bones full of marrow can be used for broths, and dried, cleaned ones are purchased by collectors, artisans, and scientists.

The bones of foreign fauna fetch a lot of koinz as many folk use them for medicinal practises. There are many beliefs that consuming the marrow, bone powder, or organs of magical creatures from beyond the rifts will allow one to gain small fractions of their powers.
Log in to World Anvil to view
bonus content and secrets! 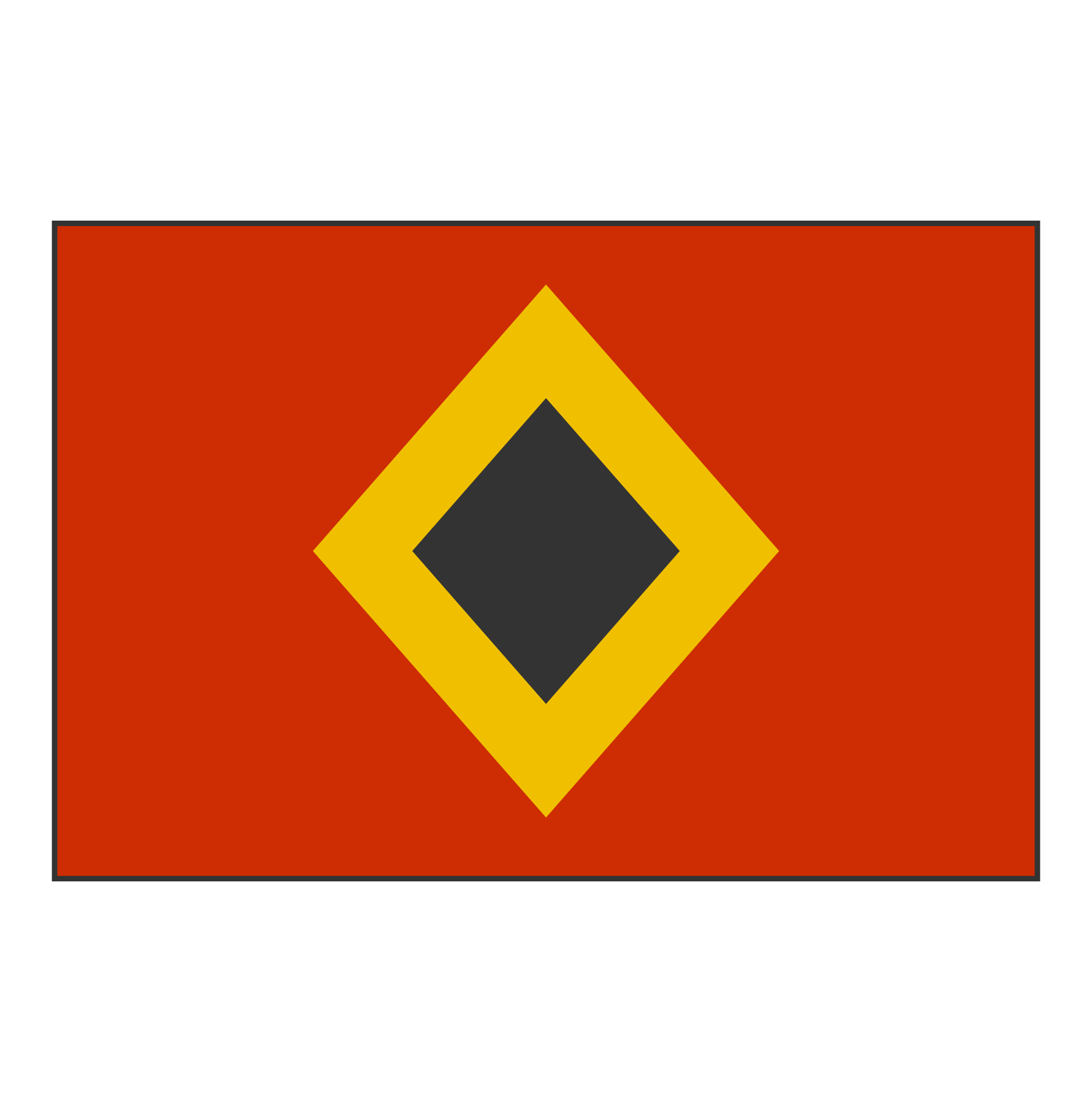 Our coin flows from the Cáruc, and our sails carry it far and wide.
— A common trader saying

The accepted currency of all countries within the Melopian Commonwealth.

Rréraliázi was first spoken from the mouth of Cáruc, and the wind whispered it to the waves.
— Quote from an old children's tale

I wrote about my step-by-step worldbuilding process for this article over on my new blog!

First! I was curious about what you would have done with the bones' idea, I like this take and the business mind of those merchants :) 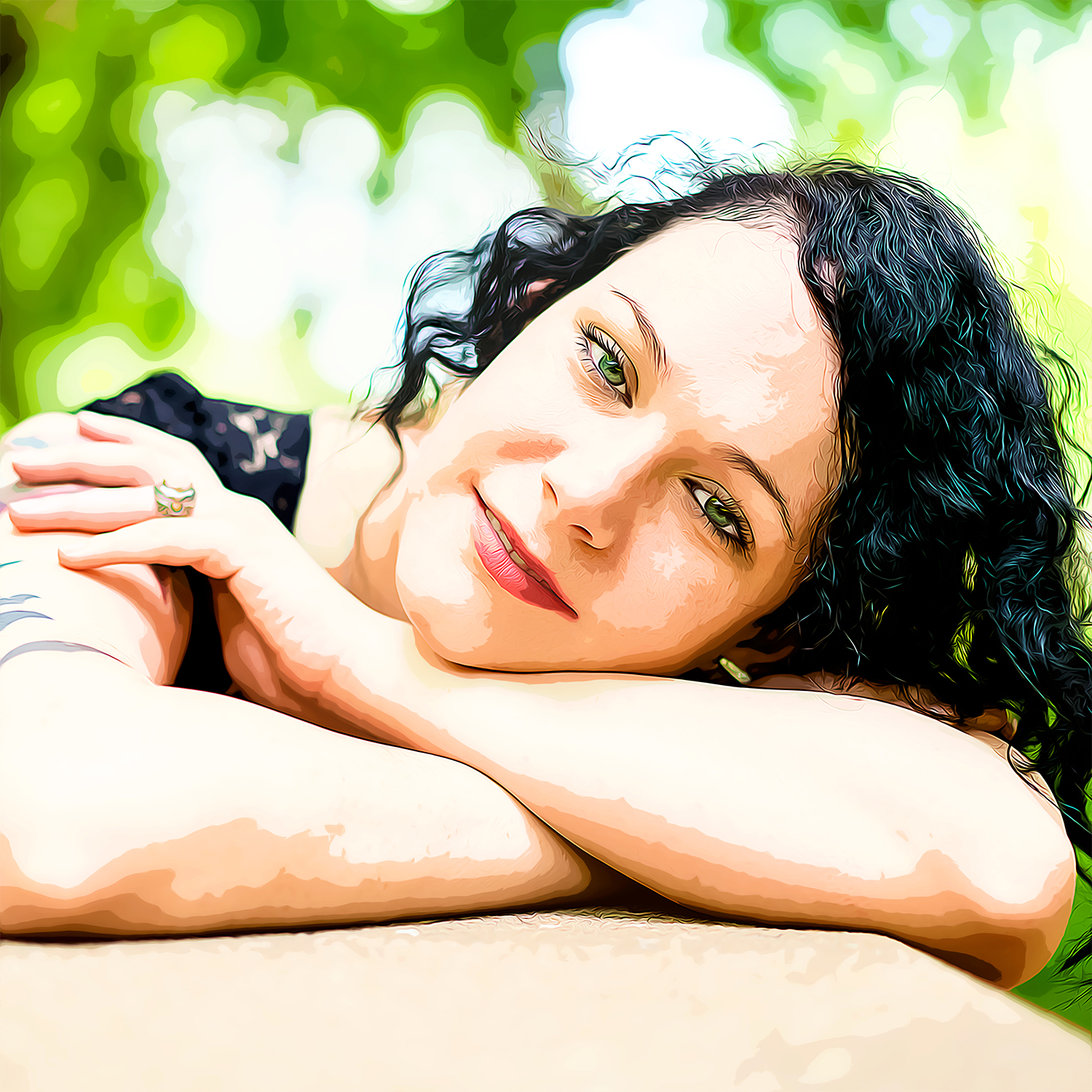 You're work with maps is amazing. I tried to download Blender to figure out how to create one similar to the one in your intro, and was so lost. I'll just stick with Adobe's software, where I'm comfortable... Lol. Def had to come see the heightmap. You are one talented person. Great job, great article.

Thanks so much! Let me know if you want me to share the step-by-step process, it didn't take as long as I thought it would :)

Hey! Sorry it's taken so long to get back to you. I kinda got in over my head with some project commitments (doh!). I didn't want to reply until I wasn't busy because I definitely want to learn your methodology. I have a few general design questions for you as well, because I love your eye and your aesthetic!

Ooh, this is very well-written! I really enjoyed the section about the bones market, although I enjoyed the entire article as a whole! The maps look great as well. :D

Thanks very much! :D

wow this looks so awesome

I really like your floating bones market and it has inspired me to make something similar in my world.

Amazing! Thanks so much :D I'd love to read about yours

Oooh, floating markets are awesome. Really like the article, and the use of icons is really neat as well.

I love floating markets! I really like that you've included the history of the river and stuff about the industry.   The height map is also fun! :D

Ooooo, I love all the interesting things you have on display about this wonderful river! The bit on the strategic location of Idura was fascinating, along with the bits of history with that. My favourite parts would have to be on the glowing jellyfish (I love the glow lamp :O) or the floating market. All the bones on display and for sale paint such a vivid mental picture <3

Excellent work! I kept thinking about "glowtech" as I was reading through this, so was happy to see that concept come back again near the end. And I always love reading more about how The Rupture affected things.